1974 MG MIDGET SPRITE STREET LEGAL GO KART Autocross, acecar, wift Kick in the A$$!!! Search on Youtube/Google: “midget rotary autocross long beach” for a video of this car in action. NO RESERVE AUCTION! I built this car with one objective in mind: Maximum horsepower and handling in the lightest package possible + road legal being pre-smog (i.e. pre-1976) in California. Here is the story behind this car: First I had this non-running MG Midget and then I bought a 1984 Mazda RX7 GSL SE and I did a complete driveline swap! The rotary engine and the transmission are now in another one of my project cars. But everything else remains! This car is all set up for you to insert a 12A or 13B Rotary or any other HOT 4 cylinder engine and appropriate transmission! I have TEN$ OF THOUSAND$ into the parts and labor into the car! MY LOSS IS YOUR GAIN! This car is HUGE FUN to drive and got TONS of attention wherever I went. This car was a SoCal TT Rally veteran (inspiring the 2011 T Shirt!) and outran and out-handled Porsches, MWs and several other stereotypical “drivers cars”. All the work was done in 2007-2008 and only a few thousand miles have been put on the chassis since then. The passenger footwell has been modified to accept the previous rotary engine’s bigass Racing Beat header/exhaust (see photos). A stock header/exhaust on a rotary or most any other 4 cylinder engine should not need to extend into the footwell.The car has always been stored indoors over the last 7 years and wasonlydriven lightlya few times over the last four years. You will want to bleed the brakes and probably replace rubber hoses, tc. Most recently, drove this car to the shop only a couple months ago in order to pull the engine + trans, nd the brakes and fuel lines performed just fine. The tires hold air but are 7 years old and worn so you will need to replace them. This car will not win any beauty contest because that was never the intention. At one point, had ideas to make it pretty but then I concluded that would not make it go any faster! The car currently sports a rattle-can flat black paint job. There are small rust holes in the passenger door (see photos) and the driver door can only be opened from the inside latch. But no worries, ens of thousands of MG Midgets and Austin Healey Sprites were built over the course of two decades so parts are EASY to find: very plentiful and cheap! The wiper motor works but no wiper arms and blades are included. NO TOP is included. 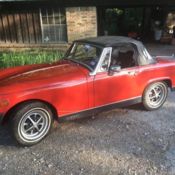 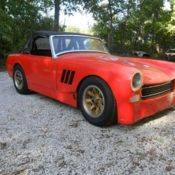 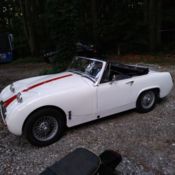 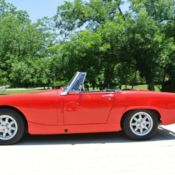 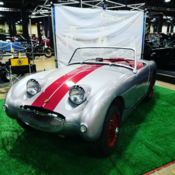 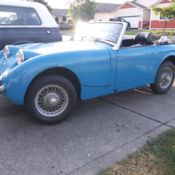 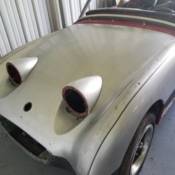 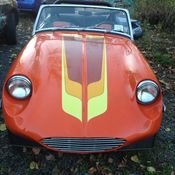 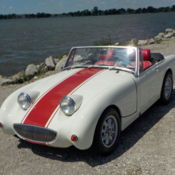 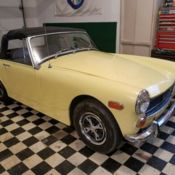