This is one of those cars that's just sweet to drive. It fires up instantly, purrs like a flathead should, never overheats, goes through the gears flawlessly, drives smooth, and stops straight with no rattles. It has just enough vintage stuff to be cool and just enough modern parts to be driven every day. To be clear, I bought this car as-is and did not build it, but here's what I can tell you about it.
1937 Ford Tudor sedan, flathead, S10 overdrive five-speed, Currie 8-inch rearend. The suspension is Pete & Jakes up front with an I-beam and disc brakes. The rear is converted to parallel leafs and drop blocks. The front end is super low and the car has a perfect stance. The engine has Edelbrock heads and an Edelbrock two-pot intake with real Strombergs. The distributor is Mallory, and it has twin Smithy mufflers. The body was clearly off the frame for a rebuild, as it's the original frame and it's been cleaned and painted black. The underside of the car presents very well and looks essentially new. The tires are new on 15-inch steelies with caps. The interior features the stock column and dash. One gauge lights up in green, the other in white. The cowl vent and the push-out window mechanisms work perfectly. All the windows go up and down nicely, and the side and rear glass has a light tint. The interior seems fresh and includes front seatbelts and a stereo hidden under the seat. The garnish moldings have been chromed. The trunk has not been upholstered.
THE BAD PART. When I saw this car for the first time it had great paint with a garage-wear blemish on the hood. The owner had decided to have the hood repainted to fix the scratch, and the paint shop matched the color poorly. To fix it, they just repainted the whole car. They didn't disassemble it, they just masked everything. I'd call the paint a 10 footer. Perfectly acceptable for me as a driver, but if you want a mirror finish show car, this isn't it. The paint has some tight laquer checking on the passenger door, a couple drips, and half a dozen flaws. It's not horrible, but it's disappointing considering the quality of the rest of the car. 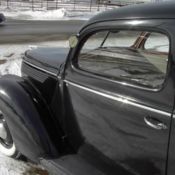 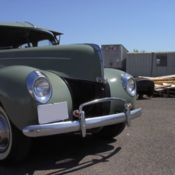 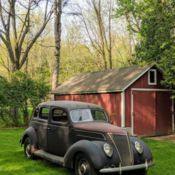 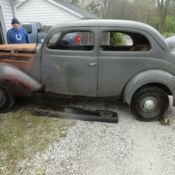 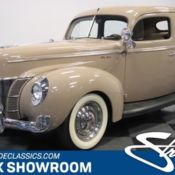 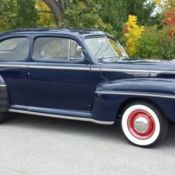 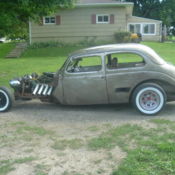 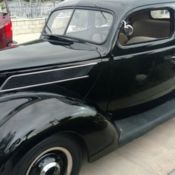 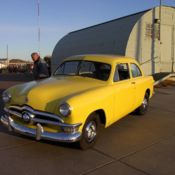 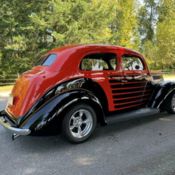