The year 1957 may well be defined by the ubiquitous tailfin of the 1957 Chevrolet – it is easily recognized from one of the most prolific designs of the 1950s. If you only own one American car in your collection, this may be the most American car you could desire – fins with a tribute to a strong racing pedigree.

The Black Widow race cars are well known in NASCAR racing history; however, 1957 racing history has some twists and turns. The black and white fuel injected 150 two door sedans appeared at NASCAR’s National Speed Weeks at Daytona in February 1957. Two months later in April, Chevrolet’s Central Office sent a letter and booklet to hundreds of dealerships, this was called, the “1957 Stock Car Competition Guide.”

This competition guide laid out the items suggested to modify on a stock car to make for a competitive platform. GM also stated that they “did not manufacture race cars” in this guide. That statement was not enough to thwart the pressure from Congress in regard to automobile racing and safety issues. In response, the Automobile Manufacturers Association (AMA) prepared a resolution to stop all participation in racing. GM endorsed this resolution on May 23, 1957. The Black Widows went on to a successful 1957 season, just not with the direct support from GM that they originally enjoyed.

The car here was built as a tribute to the Black Widow cars. Starting with the correct 150 base sedan, this car was rotisserie restored to a very high standard, with proper components throughout the build. The bodyshell and frame are near perfect condition, with limited use since the restoration. Chrome, rubber and trim are all new or restored. Glass is in excellent condition.

The interior features the correct “cobblestone” seating surfaces and door panels, as well as a perfect headliner, fresh carpets and mats, and a restored dash board with all gauges. Fisher door thresholds are a unique touch to lend class and style upon opening the door.

The engine is a healthy date coded 327ci, with fuel injection. The car fires right up with an authoritative bark. Fresh off a major service to go through the fuel injection system and correct some minor items, this Black Widow is a sorted driver. With a modern cooling system fitted, the car is ready to head down the local cruise-in, or participate on the Power Tour.

Transmission is a Borg Warner T-10 4 speed manual, sending power to a 3.55 rear end featuring positraction. A Hurst shifter is present in the interior to make shifting a proper experience.

This car was honored with a 2013 Best of Class Winner at the Super Chevy Show in Colorado after completing the restoration. It recently participated in a large event in the Pacific Northwest and received accolades. This car is as clean on the underside as the top.

The car is offered with a factory jack, spare tire, owner’s manual, and a high level of detailing throughout. For the collector of classic American Iron – the 1957 Chevy screams “cruise night” – it truly is the epitome of America in the 1950s. Make mine a Black Widow. 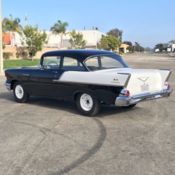 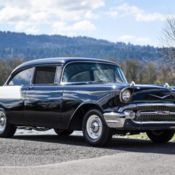 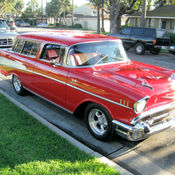 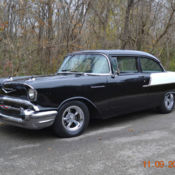 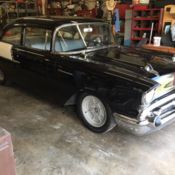 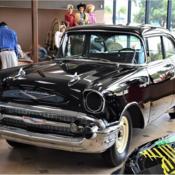 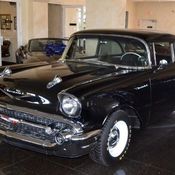 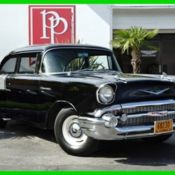 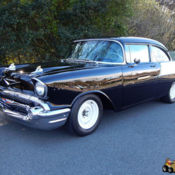 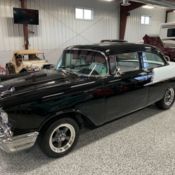