Unusual 450SLC in attractive colors. Very clean and straight, runs and drives extremely well. Newer exhaust and tires, refinished alloy wheels. Euro headlights. You never see these at shows but theyâ€™re great road cars.
This handsome Topaz Brown 450SLC is simply a good original car that has lived an easy life. It seems to hail from a warm climate that never had to deal with harsh weather, as thereâ€™s no notable rust or damage, and like all Mercedes-Benz vehicles of the era, it fits together extremely well. The doors close with a reassuring THUNK and even the metal door handles feel substantial in your hand. The coupe retains the roadsterâ€™s overall look, and the added inches are all behind the door, so it gets that cool quarter window treatment and forward-canted C-pillar that make it look sporting. The long hood/short deck styling works especially well, and if you squint a bit, you might even see a bit of muscle car styling in there. This particular car also features Euro headlights, which are a BIG improvement over the usual four-eyed stare, and the federalized bumpers look right after 5 decades of looking at them.
From behind the wheel, itâ€™s indistinguishable from the SL roadster. Same supportive bucket seats, same big steering wheel, same easy-to-read gauges. We believe the front seats have been reupholstered, but it was done in such a way so to make it simply look like normal age and fading may be in play, so it fits in with the rest of the interior. The MB-Tex in back is a little dry and thereâ€™s one split seam, but it isnâ€™t very noticeable and weâ€™d leave it alone. The carpets are surely original, as are the door panels and headliner, all of which are in good condition. The gauges are all operational, the sunroof slides open smoothly, and thereâ€™s a newer JVC AM/FM/cassette head unit in the dash, along with what appears to be a microphone for dictationâ€”a relic of the carâ€™s life in the late â€™70s. Thereâ€™s also a CB radio, although we havenâ€™t tried to see if it works. The car was apparently sold and serviced by a Cadillac dealer, which explains the engraved Cadillac nameplate on the dash but we donâ€™t believe the owner was anyone of note. The A/C appears operational but does not blow cold and since itâ€™s an R12 system we have chosen to leave it alone rather than convert it. Even the power antenna goes up and down as it should. The trunk is neatly upholstered with gray carpet, and the original spare tire and jack assembly are included.
Mechanically, the SL and SLC are identical, and in 1976 both were powered by Mercedesâ€™ rugged and wonderfully flexible 4.5 liter SOHC V8. That bubbly, smooth, torquey V8 feels like it could pull forever and it never seems to be working very hard. Thereâ€™s a precise mechanical feel to it thatâ€™s also quite appealingâ€”not the isolation to which weâ€™ve become accustomed to today, but rather the feeling of a very expensive piece of machinery doing its thing. Thereâ€™s a nice V8 burble out back from the recent exhaust system, and thanks to fuel injection, it always starts and idles well. There are plenty of signs of maintenance throughout and some new components, and the car drives well with no major issues. Itâ€™s happy to trundle around town where it dices effortlessly with traffic or blasts down the interstate at supra-legal speeds without breaking a sweat. This is still the Mercedes for people who enjoy driving.
Underneath you can see that this car has never spent time in the harsh snow and salt areas. It isnâ€™t perfect, of course, but the floors, subframes, and rocker panel areas are solid and undamaged. The only notable rust is a finger-sized hole in the battery tray, which shouldnâ€™t be a surprise. The 3-speed automatic transmission was the only option in 1976 and it shifts smoothly and imperceptibly, but offers a quick downshift when you stab the acceleratorâ€”this car feels like itâ€™s always on its toes. Out back, the independent rear end carries 3.07 gears, which are tall enough to be quiet and comfortable on the highway but allow the SOHC V8 to get into its sweet spot quickly. Youâ€™ll also note a newer exhaust system, recent fuel pumps, and signs of recent work throughout. Traditional Mercedes-Benz â€œbundt cakeâ€ alloys have been recently refinished and carry 205/70/14 blackwall radials.
These cars have been living under the radar for decades. Theyâ€™re fast, smooth, competent, and if you have a family, not a bad choice. Add in the legendary durability of the 107 platform, the relative rarity of the body style, and the bargain price, you get a hobby car thatâ€™s easy to buy, own, and live with. Call today!
Harwood Motors always recommends and welcomes personal or professional inspections of any vehicle in our inventory prior to purchase. 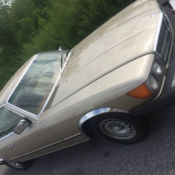 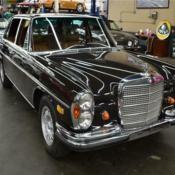 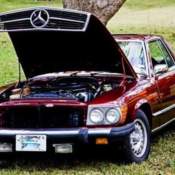 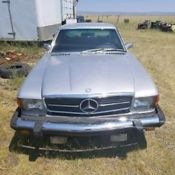 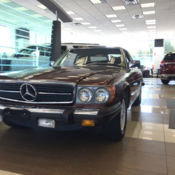 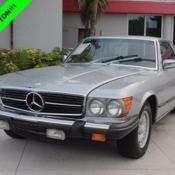 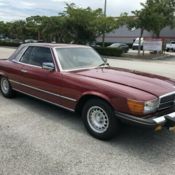 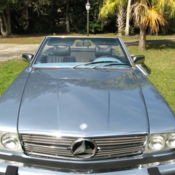 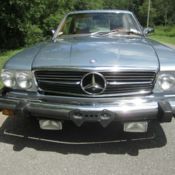 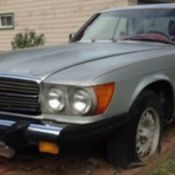