This is a once-in-a-lifetime opportunity to own an extremely rare, fully functioning, piece of history that is over 100 years old!
Up for sale is a running and driving 1910 Imperial Model 35 that has had a complete head-to-toe Rotisserie Restoration. It is one of only a few in existence today.
Manufactured in Jackson Michigan, the Imperial Automobile Company was one of hundreds of independent automobile manufacturers making a run at success in the early days of the horseless carriage. 'T.A.' and George N. Campbell were brothers and proprietors of the Jackson Carriage Company. In 1908 they added motorcars to their line and called them Imperials. They were medium sized, four-cylinder vehicles and were sold with touring car and roadster bodies. Imperial was in operation from 1908 until early 1916. In their first year of operation, the produced an impressive 300 cars and then it quickly grew year after year. Although they never adapted the rolling assembly line made famous by Henry Ford and the Ford Model T, they did employ 275 employees using a system of laborers who brought all parts and components to a team of mechanics who then assembled the car. By 1916, Imperial merged with Marion Motor Company to create Mutal Motors Company Ltd., later known as Marion-Handley.
This absolutely exquisite 1910 Imperial is a Model 35 touring car with seating for 5. It is powered by a 4 cylinder engine producing 35hp, a strong figure for its time and when new was said to be capable of speeds up to 50 mph. It uses a 3-speed transmission which functions in an H pattern very similar to modern cars using a clutch, throttle and brake pedal. For achieving maximum speed, or extra power for climbing hills, it also has 2 foot operated exhaust cut outs. This car was completely restored under the supervision of marque specialists and since has been invited/participated in many events such as the Meadow Brook Concours d'Elegance, Glenmoor Gathering and the Concours d'Elegance at Cranbrook to name but a few and was part of the automotive museum at the famous Imperial Palace Antique & Classic Auto Collection in Las Vegas. The car has also been featured in many books and magazines all while remaining in terrific working order. This elegant classic still starts with a quick turn of the crank and is a fascinating piece of early engineering to watch operate with the visible valve spring and simple technology that functions so well. When purchased new, this car had a staggering starting price of $1,650 with options convertible top finishes and 34" tires on the 112-inch wheelbase chassis.
Today, they are a rare sight. The beautiful body accented with all the brass appointments gives the car a very elegant presence. To find such an example in not only functioning condition, but restored to this level and ready to be used is an opportunity not to be missed.
1910 Imperial Model 35 Specifications:
Engine Location: Front
Drive Type: Rear Wheel
Price (in 1910): $1,650 - $1,660
Weight: 2500 lbs | 1133.981 kg
Engine Type: I4 producing 35 HP (25.76 KW)
Transmission: Manual
This car or "Horseless Carriage" has just returned from a very reputable old car restorer in La Jolla where it was looked at and had $15,000 of more work put into it. It has been appraised at $215,000. 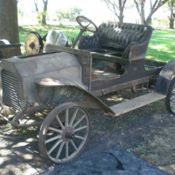 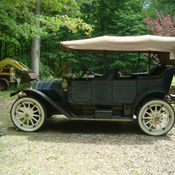 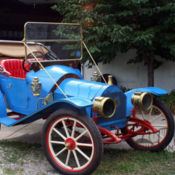 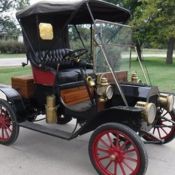 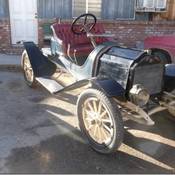 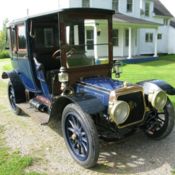 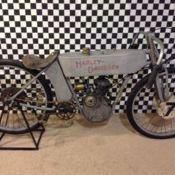 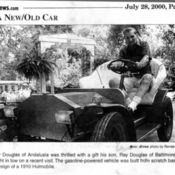 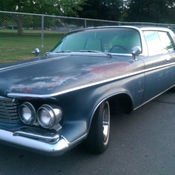