1959 Ford Fairlane 500 Galaxie Skyliner Retractable Convertible This model is so amazing that Ford gave it 4 names! First it’s a full-size Ford. It was the top of the Fairlane line the Fairlane 500; and its model designation is Skyliner as opposed to “Sunliner” which was Ford’s ordinary soft-top convertible. And finally to separate it further from an ordinary Fairlane 500 Ford created the Galaxie model designation mid-year and added it to this series. So this significant and highly collectible automobile is a Ford Fairlane 500 Galaxie Skyliner. Only 12k were built so it’s also one rare Ford! Even though this car looks like a true hardtop its top is fully retractable; this advanced design was produced in 1957 1958 and 1959. Its sophisticated mechanism folds the roof and retracts it under the rear decklid. Despite the sophistication of the system and unlike what some people believe the mechanism has excellent reliability. Consider this: a 56 year-old car has a highlysophisticatedtop mechanism that still works flawlessly. Talk about reliability!The 1959 version was significantly restyled and the top mechanism further simplified making it the most desirable Skyliner in the range. The Paris museum described the ’59 Ford as “the most perfectly proportioned car in the world”. This particular car's color combo of red/white was delivered with a contrasting top as opposed to a two tone upper and lower body section. This is much more in keeping with contemporary designs (solid body contrasting top) and thusly achieves a timelessness that transcends a period curiosity a design that withstands the test of time and looks as exciting today as it did in its own day.This particular car is a true survivor: its interior drivetrain sheetmetal are all original. It received a quality repaint in its original Red and White which according to experts qualifies it as an “unrestored” car a condition which is becoming more and more valuable as survivor cars are increasingly rare and sought after. (You know what they say: " It can only be original once.") This car also has exceedingly low mileage and its original interior was under plastic covers until very recently which explains its fine condition. The car was used regularly but gingerly by its Florida retiree owner not left uncared for which explains its excellent drivability. This Skyliner is equipped with a 332ci V8 engine Ford-0-Matic automatic transmission and a Town & Country Radio all you need for top up or top down cruising. It drives beautifully and the top works perfectly. The top working so well after 55 years is a testimony to the reliability and ingenuity of this mechanism which by the way became the blueprint for all retractable convertibles to follow (square Thunderbirds Continentals etc.) Any concerns about the reliability of these hardtop/convertibles is totally disproved by this example. No wonder the '59's are the most sought-after of the three years. I never thought that simply putting the top down on a car could be the source of so much awe and admiration but the Skyliner takes the idea of top-down cruising to a whole new level. These cars are steadily increasing in value and collectability. This is an opportunity to own and excellent one at a reasonable price before they join the ranks of the unobtainable. For an outright sale or to discuss interesting trades please call Michael at 631 553 5300 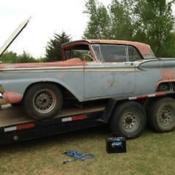 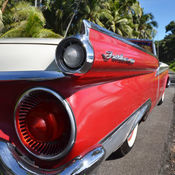 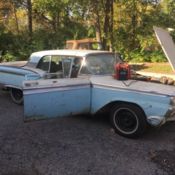 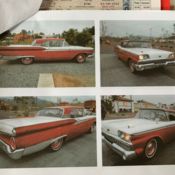 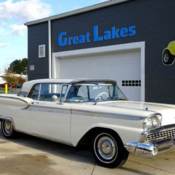 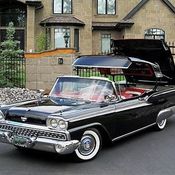 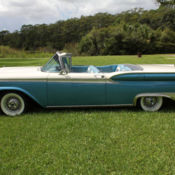 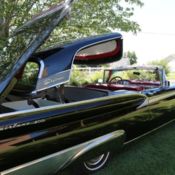 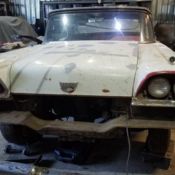 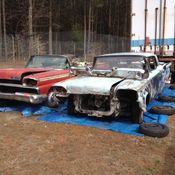