STK 2534 1990 Dodge Dakota SE Convertible Technically, the Ford Model A Ford pickup had a removable roof, but once that pioneering model left the scene it took a half-century before another automaker decided to again test the waters. Enter the 1989Ã¢â‚¬"91 Dodge Dakota Sport convertible, built by Dodge in partnership with the American Sunroof Corporation (ASC). The mid-size Dakota was a great candidate for the conversion, but the anticipated demand was never realized Ã¢â‚¬" basically a 'convertible pick-up' was... the answer to a question that the car-buying public never asked. After three years Dodge's contract with ASC was fulfilled Ã¢â‚¬" total production was 3,759 units. As a result, this 1990 Dodge Dakota Sport, partially restored back to original, is one of the rarest MOPARS on the planet. The full-body re-spray (2003) is in very good condition and chrome bumpers along with chrome bed rails provide sharp accents. The Dakota sits comfortably on a 15" set of Ultra aluminum wheels with BFGoodrich radial tires. The white convertible top and plastic window wrap neatly around a factory roll bar and are in excellent condition. Its original interior was also refreshed Ã¢â‚¬" seats were reupholstered in blue/white vinyl. Dashboard, carpeting and door panels are all nice and a factory AM/FM/Cassette stereo is housed in the dash. Other comfort and safety features include: air conditioning, tinted windows, gauge package, power steering and power disc/drum brakes. The Dodge is powered by a rebuilt (140k) 3.9L V-6 that is stock and puts out 125bhp and 195lb/ft of torque. A 5-speed manual transmission and factory differential back the V-6. Steering is power assisted, power brakes are disc/drum and the suspension is a stock set-up. This very rare Dodge Dakota Sport convertible is a solid, reasonably priced performer that is waiting for a new MOPAR owner. ALL VEHICLES SOLD "AS IS". 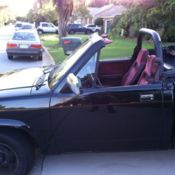 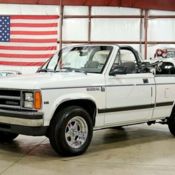 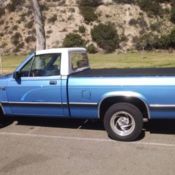 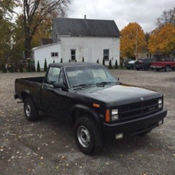 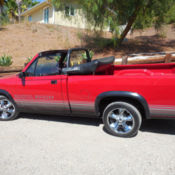 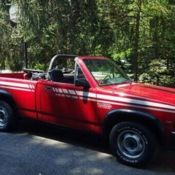 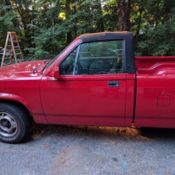 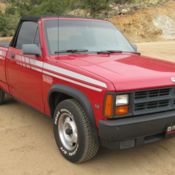 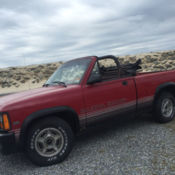