This is probably one of the finest and by far the most correct 1969 first generation Z28’s that we have had come through here at MotoeXotica Classic Cars. We are very proud to present this sparkling beauty 1969 Chevrolet Camaro Z/28 that is finished in its factory correct Fathom Green Metallic and Ivory interior. This is a very special Z28 and anyone that is serious on investing in a correct 1969 Z28 really needs to pay close attention to this car.

In the past 3 decades we have purchased over 8,000 cars from all over the world but we have to admit that the best cars always come from our local back yard and the story on this particular Z28 is a perfect example. This was an early 1969 Z28 and was built over the last week of October 1968 and completed in the first week of November 1968 at the Norwood Ohio plant. The Z28 was shipped and sold new in Denver Colorado and the new owner brought the car here to St. Louis in the early 70’s. In 1980 the car was sold to Mr. Brune in New Haven Missouri and for the next 37 years the Z28 had shared ownership among 3 good friends who were all serious first generation Z28 enthusiasts. In 1995 after 15 years of ownership Mr. Brune sold the Z28 to his friend Mr. Pisane in the neighboring town of Union Missouri. Mr. Pisane fully restored the Z28 over his course of ownership and his restoration quality was top notch and is the reason why this car still stands up today!

In 2011 Mr. Pisane sold the Z28 to his friend Mr. Branson and the car ended up back in New Haven Missouri. At this time, the market for correct and number matching Z28’s were really starting to sky rocket in value. This posed a dilemma for Mr. Branson who really wanted to enjoy driving his newly acquired Z28 but didn’t want to diminish the value. His solution was to pull the numbers matching DZ block and found another correct 1969 DZ block and sent it to Martin Engine and Machine in Vandalia Missouri to have it built for a performance street build. The original motor was pulled by Martin and confirmed as still good and functional as you can see on the original receipt photographed in the photo gallery. The original numbers matching block is included with the purchase of the car.

For the cost of $5,347.00 Martin Engine fully rebuilt the new donor 1969 DZ block into a 500+ HP high RPM monster 302 engine. They upgraded the pistons to Speed-Pro Hypereutectic 11.1 pistons .030 over, high performance rods, blue print and balanced, Comp Cam 12-422-8 and many other high perforamnce upgrades. They transferred over the correct #3927186 64cc heads and “snowflake” aluminum high rise intake from the original number matching motor. The kept the original numbers matching M21 4 speed transmission (P8R23B) and the matching Eaton Positraction 3.73:1 rear axel (BU 1024G1) all intact. Mr. Branson kept all the original parts they did not use in the new build such as original smog equipment and carb which is all still included.

As this Z28 stands today the next owner has a couple of fun options. You can actually drive and enjoy this this correct Z28 and the current sinister asphalt pounding performance of the built 302. Or you can take the original numbers matching DZ block and the rest of the holy grail 1969 Z28 parts that are included and finish this Z28 out to a very high investment level Z28 with all the impossible to find date code parts and history of this particular Camaro. The parts included with this Z28: date code correct smog pump, pulley #3927116 AU and both smog exhaust manifolds #3942527, original Hurst shifter and ball #8D410, original brake calipers, original carb #4053 3923289-DZ, original alternator #1100837, original distributor #1111443, original radiator #3010178 and the original date code correct dual horns. Included with its original 1969 Camaro owners manual, years of Missouri registration cards, copies of all titles dating back to 1980, full build sheet and receipt from the perforamnce DZ 302 build from Martin Engine and Machine and numerous other receipts and notes.

Dressed in its factory correct Fathom Green Metallic with white racing stripes, the paint and trim are in almost excellent overall condition. The glass panels are clear and crack-free and the lights are intact and haze-free. This car rides on correct 15″ rally wheels with brand new tires. All of the Camaro’s body panels are straight and solid, including the rear wing and special duct hood. The engine bay is quite tidy; the bumpers are in excellent shape and the battery looks new. A lot of the outside trim pieces appear to be original and not re-pops like many other restored Z28’s. Even down to a nice matching set of T3 headlights and date code correct tail light lenses. The previous owner even mentioned to us that it took him over five years to find the next to impossible original Missouri 1969 license plate that reads “AA1-669”. Not only does it have “69” in the tag but by coincidence its the only year the state of Missouri ever used dark green lettering. It just so happens to perfectly match this long time green Z28 resident of Missouri!

Under that duct hood with the white racing stripes is a high revving professionally built 500+ HP 302 CID Turbofire V-8 engine, buttoned to its original close-ratio Hurst four-speed manual transmission and its original 12-bolt rear with a 3.73 posi final drive. Driver assist features include power steering and power brakes with front discs, date code correct brake cylinder #309 and booster #9204. The original numbers matching DZ block is included with the purchase of this car.

Inside, the factory correct Ivory vinyl bucket seats look very good and are in nice contrast to the black carpeting, which is in good order. The black headliner and instrument panel, plus three-spoke steering wheel and inner door panels are all in very good condition. The mirror glass looks good and the center console, with its woodgrain accents, is in very good order, as is the Hurst shifter. The rear courtesy lights still work. There are ancillary gauges set ahead of the shifter on the console. Completing the interior is a factory GM AM/FM radio.

Underneath of this Z28 is extremely tidy and exactly what you want to find! The pans looks excellent and the car has been fitted with new and correct to early 1969 Z28’s non chambered dual exhaust. This Z28 sounds amazing and screams like the devil past 4,000 RPM’s, the overall performance is down right stunning!

When the Z28 emerged on the scene in 1967, it’s job was to take away some of the Trans Am victories Ford Mustangs, Shelbys, Dodge Darts and Plymouth Barracudas had been enjoying. The Z28 was remarkable in many ways—the engine was the result of engineering a 327 block with a 283 crankshaft and then using an arsenal of performance elements to create a remarkable performance engine. The chassis and suspension were addressed for balance and stability, which trickled down to the wheels, tires and brakes as well. Literally nothing was left to chance with Z28, and most of the action was available from the showroom floor. It turned the performance-car industry on its side and gave the other manufacturers something to think about. Today, the Z28 is one of the most sought-after collector cars on the market. A hybrid muscle-and-sports car, the Z28 has enough power to run quarter-mile passes all day long, but it’s truly happiest running anywhere a lot of turns and curves are to be had. The chassis allows it to easily slice through twisties, while the powerful, quick-revving engine and normally lower gearing helps it slow into the turn and shoot out of it like lightning. This Z28 is a remarkably exciting car and its pedigree makes this car a serious investment level 1969 Z28, definitely not one to miss out on as we know we will never find another like this one.

This car is currently located at our facility in St. Louis, Missouri. Current mileage on the odometer shows 14,719 miles. It is sold as is, where is, on a clean and clear, mileage exempt Missouri title. GET OUT AND DRIVE!!! 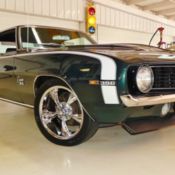 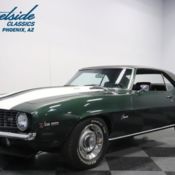