1967 Cadillac Eldorado 1st Generation of the "E1" Eldorado with the original 429. This beautifully styled vehicar is driven le was assembled on June 24th, 1967 and is production sequence No.16,801 out of the 17,930 that were produced in the 1967 Model Year. The vehicle is State of Florida Titled under VIN: H7281866 and was purchased from LasVegas NV and still carries the State of Nevada DMV Control Tag No.A22909 riveted to the door jamb in addition to the original GM Trim Tag.
This vehicle exemplifies the original Bill Mitchel "RAKISH" design intent by having shaved door handles for use with remote actuated poppers and the front fender nose filler seams having been "Frenched" to accentuate the "Gangster Look" that goes along with the hidden headlamp covers.
This is a Highly Optioned 1967 Eldorado featuring the Very Rare 1967 Optional High Performance 4 Piston Caliper "Front Disk Brakes" and also Cruise Control System with the MPH Dial on the Instrument Clusteras well as the Tilt& Telescoping Steering Column. These3 options are seldom found on the 1967 first year "E1" Eldorado.

PLEASE NOTE : This car is driven every weekend, therefore the61,686 mileage indicated on the odometer will be somewhat greater at the time of sale but not excessively more so..

Location: Florida USA Tel : (001) 7273647523
ENGINE:
429 Cubic Inch V-8 (340 Horsepower)
Maximum torque: 480 ft.-lbs.
Compression ratio: 10.5:1
Carburetor: Rochester QuadraJet
Exhaust System: Dual Exhaust to Muffler, One Outlet Pipe/Resonator from Muffler
TRANSMISSION:
Front Wheel Drive THM-425 Switch-Pitch Turbo Hydra-Matic,
3-Speed plus Torque Converter
SUSPENSION:
Front: Independent, unequal-length wishbones, coil springs, anti-sway bar
Rear: Rigid axle, single-leaf springs, traction dampers, air leveling
STEERING:
Tilt & Telescoping Steering Column
2.75 Turns lock to lock
Type: Recirculating ball
Steering ratio: 16.3 inches
Turning diameter: 41 Feet
BRAKES:
Front: 12.0 x 2.75 Inch Disk Drums
Rear: 12.0 x 2.0 Inch Cast Iron Drums
Total Swept Area: 179.5 Sq. Inches
HISTORICAL NARRATIVE
The 1967 Cadillac Fleetwood Eldorado was a bold new step into the personal luxury car market by the luxury leader, Cadillac. A styling masterpiece that was imitated for years, it was the first production car to combine front wheel drive, automatic level control, and variable-ratio power steering. This new Cadillac had a sporty flair to it unheard of in conservative Cadillac circles. Up front, a bold egg crate grille featured retractable headlamps that matched the grille texture by day, and folded down by night to reveal the Guide beams. Cadillac's handling of folding the grille covers down under the lights while the lights themselves remained stationary eliminated the momentary blinding of oncoming traffic as the headlamp assemblies rotated downward when turned on.
In profile, the 1967 Eldorado was a true masterpiece of restraint and elegance. Open flared front and rear wheel wells were not the typical Cadillac styling element, and the slotted wheel covers further emphasized that this was something different from General Motors' top of the line division. The rear ventipane windows slid horizontally back into the rear roof section when opened. The chrome-edged blade tail lamps in the rear not only displayed more than just a hint of Cadillac's trademark fin, they also had a very bold look to them that didn't resemble anything else on the road. From its aggressive front appearance to its angled rear fenders, the Eldorado was a bold styling departure for Cadillac that took some traditional Cadillac customers off guard at first.
William L. (Bill) Mitchell (C2 CORVETTE 1963-67 )
The look of the new Eldorado was crafted under the supervision of William "Bill" L. Mitchell (1916-1988) who was also responsible for many of General Motors' all-time best designs, including the 1963 Buick Riviera, which is considered by most to be one of GM's landmark designs, along with the 1963 Chevrolet Corvette and the 1967 Cadillac Eldorado.
Engineering for the Eldorado originally began in the late fifties with an experiment in front wheel drive. Cadillac stylists began work on a project coded XP-727. Oldsmobile Division work had also begun on a front wheel drive personal car, and by mid-year 1963, the Oldsmobile and Cadillac folks combined their engineering efforts in project XP-784. A few months later, in September 1963, styling design work began on project XP-820, followed by another in December 1963, designation XP-825, which was ultimately approved for production in May of 1964, with a reduction in front and rear overhangs being the only major exterior change made prior to production. to the first original triple black Eldorado prototype came to fruition,.. the all-black color combination was conservative in appearance to some, while it was considered rather sinister ad aggressive to others when combined with the hidden headlamp covers.
While the new Eldorado took some time to catch on and become accepted by the traditional Cadillac masses, by 1968 they were selling very well, with many dealers reporting a low on-hand count for most of the year. Even the middle class had to have an Eldorado, with several sometimes being found on the same block.
The 1967-1970 Eldorados are Certified Milestone Cars that are being collected by enthusiasts in ever-growing numbers today. Despite their size, these cars handle and perform well. 1967 models without the optional front disc brakes can be a bit unnerving in panic stops, but they became standard for 1968, and overall drivability seemed to improve with each year.
Cadillac said the 1967 Fleetwood Eldorado was the world's finest personal luxury car, which is what most would expect from Cadillac, who could do no wrong back in the 1967 period. The Eldorado certainly did create quite the stir when it first appeared in showrooms, and is today resurrected in the start of a new modern youth movement ! 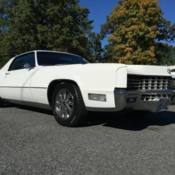 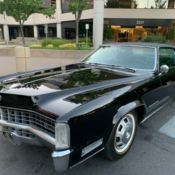 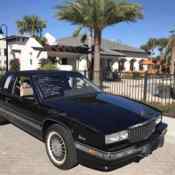 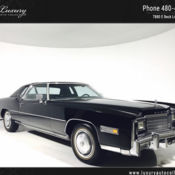 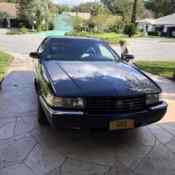 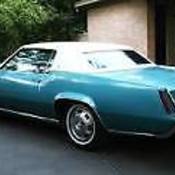 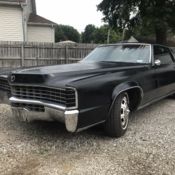 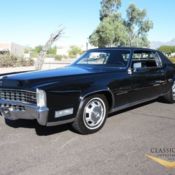 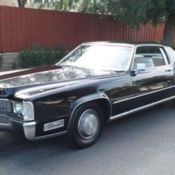 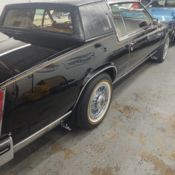