A one of a kind ride that's been built by renowned experts with an attention to detail that's obvious everywhere you look. That certainly doesn't come along very often. This 1970 VW Beetle is just that. It went from concept to reality in front of admiring onlookers in a scant 72 hours as a featured project on Speed Network's Car Warriors and now stands ready to bring its magic to your garage. While it's not too hard to find someone who can handle air tools and a welder, the skillfully executed modifications this Bug features from front to back are far beyond the realm of all but true automotive artists, so as the group of Car Warriors gathered to show why they're so respected among their peers, a cautionary "Don't try This At Home" would certainly apply. Its roof has been chopped to sit 5" lower than originally and it cruises just above the ground, with a widened and elongated stance that gives it an identity all its own. Up front, you'll see its "F Bomb" moniker displayed via a killer graphic that seems to lift right off the burgundy metallic paint that surrounds it, bracketed by the pair of exposed shocks that provide a great look. If you step to the side, you'll see more handiwork that makes it appear as if that same paint lifts back to expose the steel underneath with a jaw-dropping 3D effect. In spite of all the modifications, everything you see sits perfectly in place, as if it began that way - no unevenness between body panels and everything in impressive proportion. This is truly one badass Bug. One look at the gray cloth interior will also tell you it's no mere well-executed curiosity either - this car is built to drive. The pair of Konig bucket seats look great inside - they're plenty comfortable, featuring a lot of bolstering for support and their industrial-looking frames are a perfect match for the rest of the interior. Just beyond the custom steering wheel, an MPG GPS speedometer sits alongside VDO gauges and a pair of monitors connected to back-up cameras on the aluminum dash. Bring along your iPod or other Bluetooth device and connect it inside to access endless audio options - whatever you land on, the custom amp and subwoofers mounted inside will make the sound come alive. Raise the awesome illustrated hood and you'll see the fuel tank and a well-secured battery sitting up front. This VW is built for two and leaves some storage space behind the buckets for some modestly sized items. A 2275 cc engine powers this lightweight street rod, sitting on full display in the exposed rear engine compartment, with its custom-fabricated exhaust standing at attention as if locked and loaded for action. Some aftermarket attention has enhanced its power and it sounds great as it sings into its headers while propelling this aggressive-looking VW down the highway. The powerplant is paired with a 4-speed manual transmission. It rides with undeniable presence on a set of 15" American Racing wheels that have been outfitted with Hankook Optima tires in front and Hankook Ventus H101 Tires in back. Disc brakes at all four corners - with upgraded Wilwoods up front - provide dependable, fade-resistant stopping power. This very well-executed custom 1970 VW Beetle is sure to draw admiring glances and make strong impressions wherever you take it. Call today! 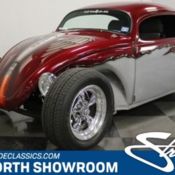 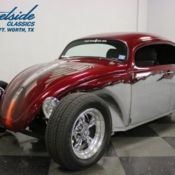 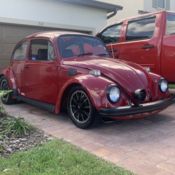 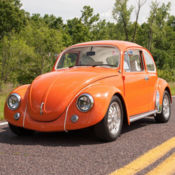 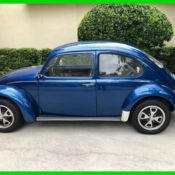 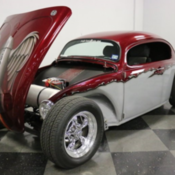 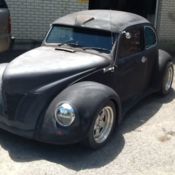 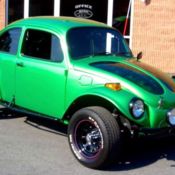 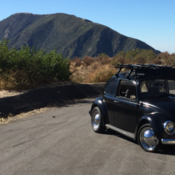 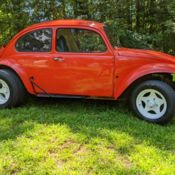