Runs and drives great. Easily the funnest car I've ever owned. Corners beautifully on recently refreshed suspension and good Pirelli tires on Minator rims. The little motor fueled by twin SU carbs sounds fantastic and gives the car a spritely, zippy demeanor. It includes the rare, factory hardtop, though the headliner is torn in places. The soft top has several rips, but a brand new one is included to be installed. Also included is a new tanneau cover and top cover.
The dashboard has a crack, but an original dashboard in great condition is included to replace this. I just refreshed the interior last summer, cleaning all the carpet, having the seats recovered and refilled, repainting the radio surround, and installing a new poly transmission tunnel cover. When removing the carpet I found the rust pictured in the passenger footwell and purchased a patch panel that I never got around to installing but which will be included. The driver side footwell is clean.
Under the bonnet, I installed a new generator and a larger radiator. I've driven the car two hours in 90 degree heat and the temperature stays perfectly normal. The 4-speed transmission with non-synchronized first gear shifts smoothly. I rebuilt the shifter in early spring of last year. I also replaced the valve cover gasket and did a full oil change. The car has a header and sportier exhaust installed by the previous owner. The original exhaust manifold is included but has a crack.
This car underwent a partial restoration at some point in the 1990's and includes a binder full of receipts and documentation of almost everything that was done. I am also including a myriad of parts on top of those I have already mentioned. Of particular note is the original rims and hubcaps, a set of unrestored wire wheels (these will need sandblasted and repainted), a fitted car cover, two or three shop manuals, a period owner's manual, a new windshield gasket, a rust-free windshield frame with window, an extra bumper, two sets of factory chrome overriders, an extra trunk lid, a new set of bullet mirrors, and much more.
As for issues with the car, the passenger side rear wheelwell has some cracking filler, as pictured. The tach has begun to work only intermittently lately. A spare set of gauges from the parts car is included. The car drips oil slowly, but nothing unexpected from a 50-year-old British car. The windshield frame has some rust bubbling and the gasket is old, but replacements for both of these are included. The paint is tired with some cracks and numerous rock chips on the nose and lower portions of the doors. There's a dent in the rear quarter and on the hood.
The parts car is a 1969 Spitfire. The body is totally shot for the most part, but numerous good panels have been removed and will be included such as the doors and aforementioned trunk and windshield frame. The ladder frame appears good and the motor turns freely though I don't know when the car last ran. Still has lots of good parts. Everything I have taken off of it will be included.
This is a gorgeous little car that's an absolute blast to drive and it only needs a bit more work and a paint job to be perfect. I have far more pictures than eBay will let me list, so if there's anything you want to see let me know and I can try to get it to you. I'd be happy to answer any questions you might have. Thanks for reading. 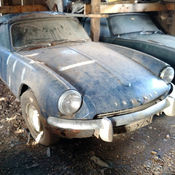 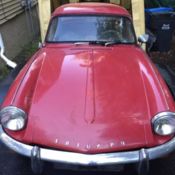 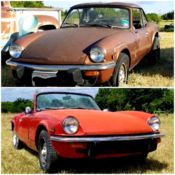 1978 Triumph Spitfire with Hardtop and Bonus1976 Spitfire For Parts 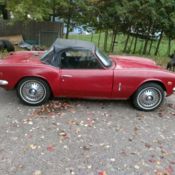 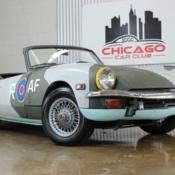 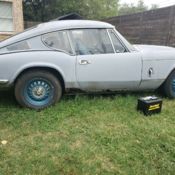 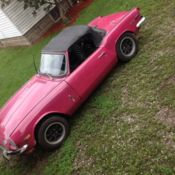 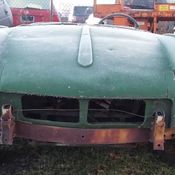 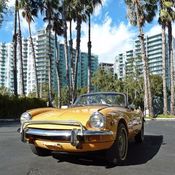 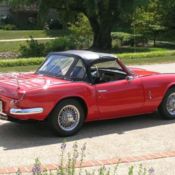