This 1961 Toyota FJ40 Land Cruiser comes from one of the first years of the now-legendary 4x4 line. But while you'll love it for its vintage status, you'll also see investment in the right places to keep this a fun and capable off-roader, including in the engine bay.
Since this represents the early years of the FJ40, you want it to look stock while being capable. That's why you have modern off-road tires without lifting the stance to the sky. And the red is a more modern application that looks vivid without being too flashy. Plus, the white top and grille add an almost two-tone look. Also, take some time to look over all the details. The full-size spare on a swing away mount, steel bumpers with rubber guards, rear step with tow hook, and locking anchors for both the hood and fold-down windshield - it's all part of a complete, classic, and rugged package. Everything really looks correct, right down to the badging.
The robust interior is part of the FJ's bulletproof attitude, and this one remains complete, right down to the 4x4 shifting instructions still bolted to the glove box lid. As you look a little closer, you start to see a quality not found in some of the others. There are new seats, new door cards, and a new floor liner to keep this one feeling especially fresh. And the upgrades are not just up front, but also in the rear, where you have the hallmark side-mounted jump seats. You'll grab the thin, grippy steering wheel with correct Toyota center cap in your left hand, and the tall gearstick with your right one - and that's when you'll know what an old-school 4x4 really feels like. The rubber seals are quite good so that it feels like a proper buttoned-up machine. And there are even some provisions for air conditioning. Of course, anytime you feel like being closer to nature, the full roof and door package is removable, and you have an open-air 4x4.
Just like the rest of the vehicle, the engine bay has been given extra attention to make sure this it looks both tidy and robust. The FJ40 Land Cruiser was such capable machine that it was in production for nearly a quarter-century, and this example has been upgraded with some of the best features of later siblings. So you get the ideal robust F-series inline-six motor that has been the backbone of Toyota toughness, but now in the larger 4.2-liter displacement. And you get to take better advantage of this added power with the four-speed manual transmission. The two-speed transfer case and Nexen Roadian AT Pro tires allow this impressive classic to still live up to its go-anywhere reputation. Plus, the power steering and power brakes w/discs up front are great for the street or the trail.
This is the right mix of vintage style and well-done upgrades to deliver the Land Cruiser you've been waiting for. So don't let this deal slip away, call today! 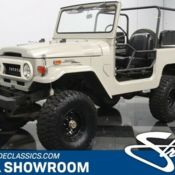 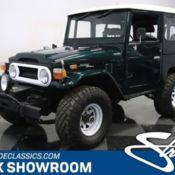 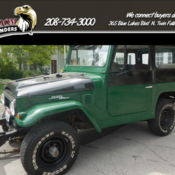 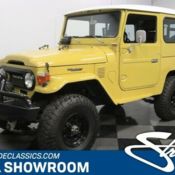 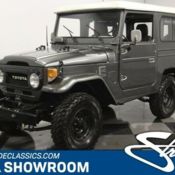 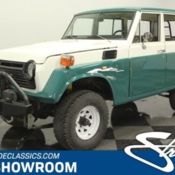 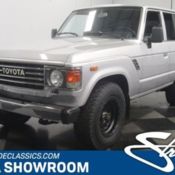 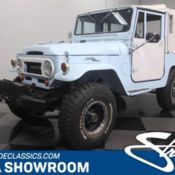 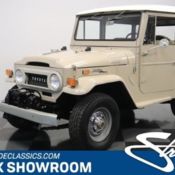 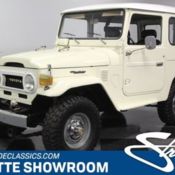