Highly sought-after in the classic 4×4 market, MotoeXotica is thrilled to present another fully restored Toyota FJ40 Hardtop Land Cruiser. This one had a frame-off restoration in dry Arizona and California completed in November 2008 by its previous owner of nine years, with all new paint and rubber weather stripping plus the following new parts – hood latches, nuts and bolts, side marker and tail lights, clutch and tires.

According to 2012 emails from the seller, a Mr. Painter, he originally bought the truck because of its lack of blemishes and no major body repairs had been made. The seller said the only non-stock items on the truck are the headers intake manifold, exhaust, stereo, stereo shelf, tow hitch and front shoulder belts. He said after the restoration, the truck has only needed general tune-ups and engine oil topped off. The engine compression is okay and truck still retains its original ignition system points. A previous owner replaced the alternator. He goes on to explain the cooling system is in great condition and the new headers allow the engine to run cooler. The intake manifold was replaced along with the headers. All steering joints and tie rods were replaced. The transmission and transfer case are in very strong condition.

Painter said all of the truck’s original smog equipment, pump, bracket and air rail were all removed. California is smog-exempt for the 1972 model year and Painter wrote that the truck runs better and gets better fuel economy without the smog equipment.

The paint on this sunny rover was professionally applied and is in very good condition, with only a few blemishes visible upon close inspection. The glass panels are clear and intact. The vehicle’s lights are in one piece, clear and work as designed. The truck rolls on BFGoodrich All-Terrain T/A tires, 33×10.50/R15, front and rear surrounding Toyota hubcaps.

All body panels are straight and look nearly impeccable and the bumpers are in great shape. The seats are in very good shape, as is the matching carpet. The headliner is in good shape while the instrument panel with its yellow painted metal sections is in near-excellent shape with all gauges working as designed. The steering wheel is in very good order and the door skins are in great shape. The fold-away rear jump seats look great and there is a rear heater plus safety device. The mirrors, shifter and transfer case lever are in good shape and completing the interior is a Pioneer AM/FM stereo with CD mounted above the driver and front passenger seats.

The Toyota J40 is the model designation for a Toyota Land Cruiser 40 series made from 1960 until 1984. Most 40 series Land Cruisers were built as 2-door SUVs with slightly larger dimensions than a Jeep CJ.

The model was available as the FJ40 series (with F engines) and made legends out of the FJ and the F engine. Its first production year was 1960 and it debuted with a short wheelbase version. The FJ40 was produced until 1984. One of the key features of the FJ40 is its folding jump seats behind the front two seats, making it easy to squeeze in more passengers or cargo. Though relatively sparse on creature comforts, the FJ40 nonetheless captured the attention of buyers the world over impressed by its reliability, sturdiness and off-roading ability. The FJ40 comes either as a soft top or a hardtop.

While not legal in some countries, most J40 series vehicles could have their roof and doors removed. With a folding windshield this allowed for complete open-air experience.

The J40 Series also featured folding jump seats behind the passenger and drivers seats. These folding seats not only made carrying another 2 passengers possible, but also allowed for maximum cargo space, as opposed to the folding rear seat in the Jeep CJ series.

This car is currently located at our facility in St. Louis, Missouri. Current mileage on the odometer shows 85,177 miles. It is sold as is, where is, on a clean and clear title. 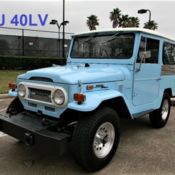 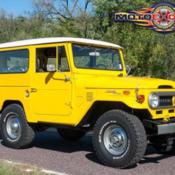 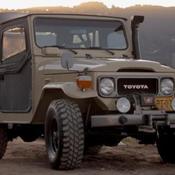 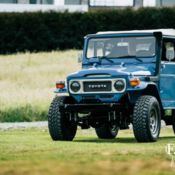 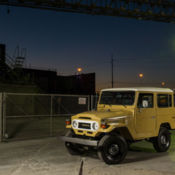 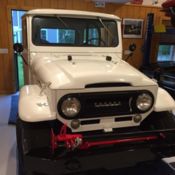 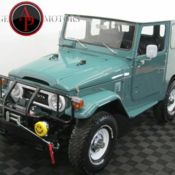 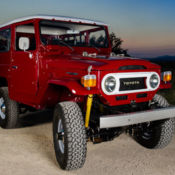 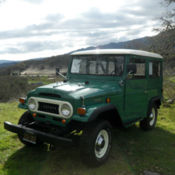 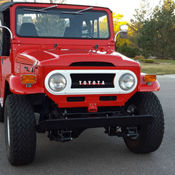