This 1966 Pontiac Grand Prix might just represent the largest quality-to-price ratio of anything in our inventory. It almost feels criminal to buy a car at this price after someone else has invested two, maybe even three times that figure restoring it, yet here it is. Look at that spectacular interior, the laser-straight bodywork, the Tri-Power engine, and the ultra-clean undercarriage. Cars like this don't come along often, and if you seek quality instead of a low price, this car will impress you in every possible way. Price guides are worthless when cars this extraordinary show up, so take a close look at the photos and realize that it's probably even better in person.Â

In 1966, Pontiac was hitting on all eight cylinders with their marketing, and the guy who owned this car when it was new understood that he wanted some attitude with his luxury. The Grand Prix was redesigned in 1965 and largely unchanged for 1966: longer, lower, and wider. There's no question about its Pontiac DNA given the sharply pointed nose and stacked headlights, making it look like a GTO for grown-ups. Code V Mission Beige is a handsome, understated color that's right for a car like the Grand Prix, but we're guessing that few paint jobs in 1966 ever looked this good. Sight down the long quarters on this hardtop and you'll see OEM sheetmetal that's unmarked and super straight, a product of lots of time and money, not to mention quality base stock (we believe the 52,947 miles are authentic). All the chrome is either excellent original stuff or refinished, with beautiful anodized aluminum rocker panel trim that shows extremely well. There are even T3 headlights up front—impressive. If there is any demerit on this car, it's that the paint on the flange behind the rear tires is a bit scratched from road debris. Seriously, there aren't many nits to pick here!

As nice as the bodywork is, however, the interior is where you'll fall in love. It's very correct 590-K Gold brocade fabric and vinyl and it's exceptionally well detailed. Everything you can touch is probably new, and if you need to know whether the money was spent, just take a look at that clear plastic steering wheel and crystal clear gauges. Everything works, including the cold A/C and power windows, and you're going to slam those doors pretty hard because the seals are new so it seals up quite well. It's nearly silent in there. The A/C vents on top of the dash are a cool feature and the grab handle for the passenger seems to indicate that the Grand Prix was as much about performance as comfort. There are auxiliary gauges under the dash for oil pressure and temperature, but that's it for modifications—even the AM radio is stock (and fully operational). The trunk is properly finished and that's where the only demerits can be found: there's some mild surface spot rust on the trunk floor that is pretty typical—those rubber trunk mats trap moisture and it's all but inevitable. There is, however, a correct full-sized spare tire and jack assembly.

The engine is a correct YF-coded 389 cubic inch V8 rated at 325 horsepower in the Grand Prix. Experts will note that the 1966 Grand Prix 389 was not available with Tri-Power, which was added during the restoration (the original 4-barrel intake and carb are included and the Tri-Power setup is probably worth $2500 if you want to change it back). The setup was recently rebuilt and tuned, so it starts easily and idles smoothly, and it does indeed make this big coupe hustle. The engine bay is very well detailed with only very minor signs of use, mostly on the exhaust crossover where all Pontiacs burn the engine enamel off the heads and intake. They did get a little creative with the fuel line routing, and I might try to clean that up to really make it look OEM, but to their credit they used a proper filter with a return line—I believe those are quite rare. Fittings and hardware are mostly correct with only a few hose clamps needing replacement to be ready for the show field. You'll also find a rebuilt alternator, correct master cylinder, and a new insulation mat under the hood. You'll never be ashamed to open the hood on this awesome Pontiac, no matter where you go.Â

Underneath, the TH400 3-speed automatic shifts crisply and with 3.25 gears out back, it's a superlative highway cruiser with the A/C cranking. Ride quality is what you'd expect for a luxury car from the '60s: smooth, controlled, and totally isolated. There's not a squeak or rattle anywhere in this car and you can hear the bumps but you sure don't feel many of them. There's a fresh dual exhaust system, the brakes and suspension are rebuilt, and as long as you're looking around, check out how clean those original floors really are. Power brakes are plenty powerful, so don't fret that you need discs to be safe (check out the size of those finned drums!) and the power steering is that familiar GM setup with fingertip control. 14-inch wheels with hubcaps look right and carry fresh 205/75/14 Goodyear whitewall radials that ride and handle great.Â

The car includes recent receipts for more than $3000 in service and upgrades, plus the aforementioned original 4-barrel intake and carburetor.Â

This spectacular Grand Prix just gets everything right. It doesn't need the flash of a red paint job, and one drive in that gorgeous interior will convince you that the guy who owned this car in 1966 was well and truly The Man. That guy didn't need flash, and this car totally nails it more than 50 years later. Perhaps the price is more than the price guides say it should be, but then again, you're getting the restoration for thirty cents on the dollar and the car is free. Pretty hard to beat that, don't you think?Â 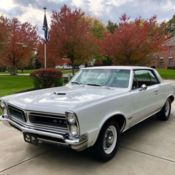 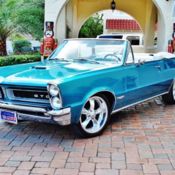 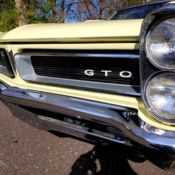 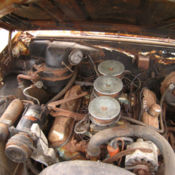 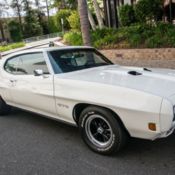 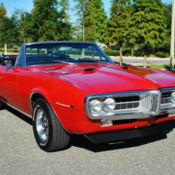 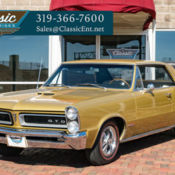 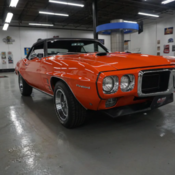 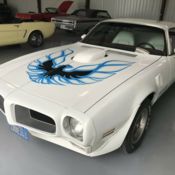 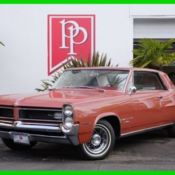