1959 Berkeley Sports. Front-wheel drive, left hand drive. This car started its life as an SE-328, with a two-cylinder, 328cc Excelsior engine. Sometime in the 1960s the 328 was replaced with the larger 3-cylinder 492cc Excelsior engine. (Other modifications at the time included relocating the gas tank from under the hood to the rear of the car, and moving the battery from beside the engine to its current position behind the engine. A smaller, custom-made steering wheel replaced the original wheel.)

I’ve owned the car since 2005. Berkeleys were popular small bore racers in the late 50s and early 60s, running in the I-Production and H-Production classes, and my intent was to set the car up for vintage racing. I sent the car to a shop in Connecticut (GMT Racing) to get it running and to make the necessary modifications (mostly safety mods) to make it eligible to run with the VSCCA (Vintage Sports Car Club of America). GMT installed a removable roll bar, and replaced the old rusted fuel tank with a racing fuel cell. They also installed an electronic ignition, and improvised a small holding tank above the engine that is fed by an electric fuel pump and gravity feeds the three Amal carburetors. The exhaust was recently replaced with a newly-manufactured expansion chamber exhaust from the UK-based Berkeley Enthusiasts Club. The club is very active, and really helpful with spares, a monthly newsletter, and great advice. And…given the small number of cars that were built, there are a surprisingly large number of them around – both here in the States as well as back in the UK.

The car has run at Lime Rock Park and at Watkins Glen. (As a racer it is best suited for smaller tracks with lots of turns. The car can carry lots of speed through corners, but can’t keep up with larger cars on the straights.) I’ve also taken the car on some day tours, including a trip to the top of Bear Mountain, and a trip with the Westchester Region Antique Automobile Club, retracing the route of the 1908 Briarcliff Trophy Race. It’s also a fun car to take to the grocery store or run errands around town. The car has been shown at the theScarsdale Concoursd'Elegance, and at the FairfieldCountyConcoursd'Elegance.

The car is in good shape, but has been off the road for a couple of years, and will need a good once-over.

Unlike many other ”rare cars”, with parts described as being made of “unobtainium”, Berkeley parts (lights, hinges, etc.) can often be found fairly readily. It seems that Berkeley wasn’t shy when it came to sourcing parts from other manufacturers. And, although Lucas electrical components may have their issues, you can find replacement parts.

It’s also an easy car to keep. The Berk is only ten feet long and just over four feet wide. It’ll fit sideways in most garages – and you can move it around by picking up the rear and wheeling it wherever you want it. But as small as it is, it’s a real car – and it is a blast to drive.

The car was featured in Hemmings Sports & Exotic Car in 2007.

and Hemmings described Berkeleys in 2008.

An interesting video of the restoration of a 1958 SE-492 as a vintage racecar is included in this article.

Berkeley cars were produced from 1956 through 1960 by Berkeley Coachworks in Biggleswade, Bedfordshire, UK. The original Berkeley Sports introduced in 1956 was a lightweight, two-seat sports powered by a 322cc Anzani two-stroke twin producing 15 bhp. Subsequent models replaced the Anzani with a 328cc Excelsior Talisman twin (18 bhp), a 492cc three-cylinder version of the Excelsior Talisman (30 bhp), a 40 bhp Royal Enfield 692cc Super Meteor, and finally with a 50 bhp Royal Enfield 692cc Constellation.

The car was unique at the time of its launch in that it employed not only a transverse engine and front wheel drive, but a complete fiberglass monocoque body reinforced locally by lightweight aluminum sections. (The Berkeley engine and drive placement was later made popular by Austin in their Mini – and the fiberglass/aluminum structure was later employed by Colin Chapman in the Lotus Elite.)

Berkeley produced about 2,500 hundred four-wheel cars, as well as a number of three-wheel T60 models (powered by the 328cc Excelsior Talisman Twin and appealing to motorcyclists moving into automobiles). Berkeley ceased production in December 1960 when the company overextended itself in the development of an all-new model in their attempt to compete in the U.S. market against the new (and much more traditional/substantial) Austin-Healey Sprite and MG Midget models. 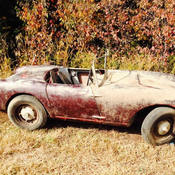 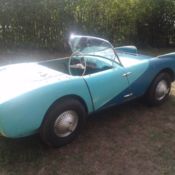 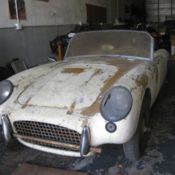 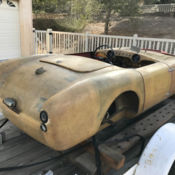 Berkeley SE328 Sports Car. 1958 for restoration or parts In garage for 50 years 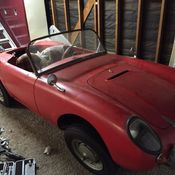 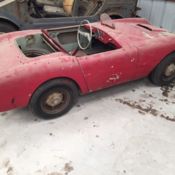 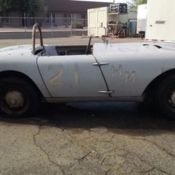 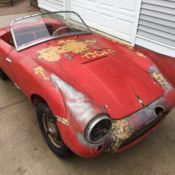 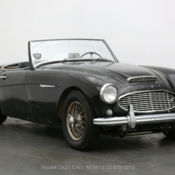 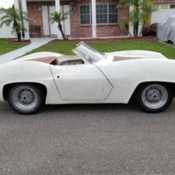