West Coast Classics are proud to present a very fine example of this unrestored and original southern California and completely rust free coveted original California 'black license plate' 1964 Oldsmobile F85 Cutlass 2 Door Convertible 442 clone with it's original matching # 330ci/290HP 4 barrel V8 engine matched to the desirable F-85 'Jetaway' automatic transmission (a $316 option in 1964) with reportedly only 61K original miles!
Finished in it's original factory 'Cashmere Beige' (color code R) paint with it's original factory 'Saddle' (trim 968) color vinyl seats and interior and obviously always garaged and covered since new! The floor boards, trunk and all the typical rust-prone areas are solid and rust-free and the car has no signs of any accidents - obviously a garaged and cherished southern California driver only.
The car looks extremely impressive with it's original 'Cashmere Beige' color paint and the original 'Saddle' interior is in exceptional and virtually completely original condition throughout, apart from some after market gauges added whilst under the previous ownership! The complete interior, including the dashboard, the matching headliner, the carpets and all the seats and door panels are in absolutely exceptional condition with virtually no signs of wear and tear! All the chromework is also in exceptional condition and the original spare wheel with it's jack is in the trunk.
The original matching # 330cid V8 engine with still correct factory colors is extremely strong and powerful and this particular car drives absolutely magnificently - must be driven to be believed - drives straight as an arrow with no strange road wobbles, shakes or rattles - a truly remarkable daily driver that will give any modern day sports car a run for it's money!
The Oldsmobile 442 was born out of the competition between the Pontiac Division and Oldsmobile. It began as a response to the Pontiac Tempest GTO which had proved such an unexpected success in 1964. The package was dubbed the 4-4-2 based on it's combination of four barrel carburetor, four speed transmission and dual exhausts. The package also included a stiffened frame, boxed rear suspension control arms, a heavy duty clutch and four speed manual transmission, a heavy duty driveshaft, oversized brakes and heavy duty suspension package with heavy duty wheels, higher rate coil springs front and rear, heavy duty shock absorbers, a large front anti-roll bar and an additional rear anti-roll bar. The 442 became a separate model from 1968-71. It would rival any other muscle car of it's day and has a large and enthusiastic club following.
This particular car is an original southern California 1964 F-85 Cutlass Convertible which has been cloned as a tribute to resemble a 442 Convertible and boasts its original factory power steering, a power top, it's original 'Olds' AM radio & 8 track cassette player. The car has 'Torque Thrust' wheels and a 'Flowmaster' dual exhaust. The desirable optional 'Jetaway' automatic transmission shifts smoothly through all the gears, there are no noticeable oil leaks and the temperature always remains cool!
Owned since new by only southern California owners, well maintained and cared for and although obviously not a concourse example, this remains a very rare and highly desirable unabused and very original example of one of the outstanding preludes to the classic muscle cars of the 1960's. In summary, this is one great daily driver example with reportedly and believed to be only 61K original miles on it's original engine, in turn-key ready to enjoy condition. 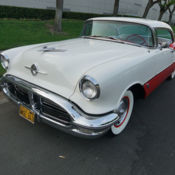 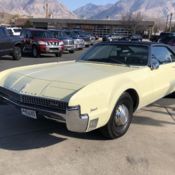 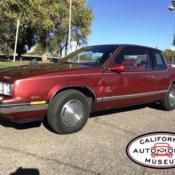 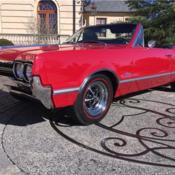 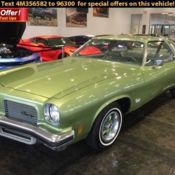 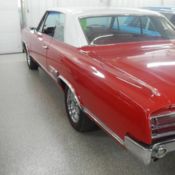 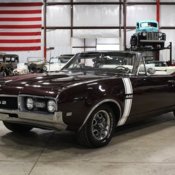 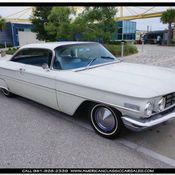 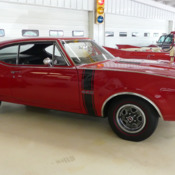 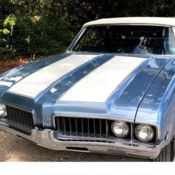