Up for auction at no reserve is a 1967 Mercury Cougar XR 7 project. The car came from the Pacific Northwest and is pretty solid with the exception of places that will be described further. It is also pretty straight with good body gaps and may even have some original paint on it. Without a doubt, it will require a compete restoration but is very much worth saving. This car was Motor trend car of the year in 67 and this color combination was the signature color for that year.

Before I go any further I need to disclose that the driver side fender apron has been replaced once upon a time and the VIN does not match the title. The door data plate is in place and does match the VIN on the title which is 7F93C559173. The VIN stamped in the apron is 7F91Sxxxxxx. This is and always has been an XR7 model which would be represented by 93 in the VIN. 91 is for a standard Cougar. Appears the apron came from a Maroon Metallic S code car as one of the pictureswill show. I have a title and bill of sale from the last titled owner from the state of Washington.I wouldn't be surprised ifthe second VIN is under one of the fenders buthaven't looked. I purchased the car off Craigslist from a very dishonestperson in Idaho who didn't disclose this orthe actual condition of the car as I amdoing here.This personworks on staff at thelocal university in his town and seemed to be very straight and on the up and up. Lesson learned!

All that said, thiscar has good bones andisworth my opening price in parts and then some.I willlikelytake it in the shortsfor my mistake so my loss is your gain.

Here is a quick rundown on known rust issues:Front passenger side floor pan is rusted out likely due to leaking heater core. The rest of the pans, torque box and floor supports look solid. There is a little rust in the lower passenger quarter panel right behind the wheel. Trunk drops, floor look good. Quarters looksolid other than what I have described. Wheel houses are solid. Bottoms of doors, fendersare good. There are two smallscaly spotson bothfender aprons where they overlap. A common problem onthese cars and Mustangs. Passenger doorsticks and is difficult to open butit does open. Drivers door opens and shuts easily and does not sag at all. Windows all roll up and down as they should.I have not tried to start it but previous owner sayshe got it started by pouring gas in the carb. Take thatfor what it's worth. Theinterior is all there but as you can see ispretty weather worn! Looks like the car sat outside maybe in a desert climate for a while.There is sand everywhere. One lastthing....there is no windshield-another little tid bit the dishonest professor didn't disclose.I think I have described the car to the best of my ability andalong with the picturesyou should be able to make a good assessment of the car's value.If there is anything you are not clear aboutplease contact me before bidding. 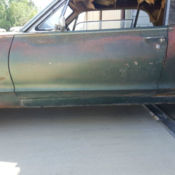 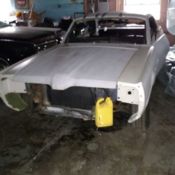 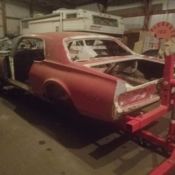 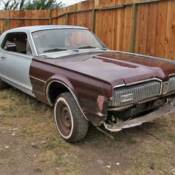 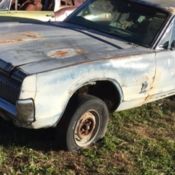 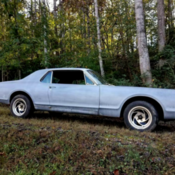 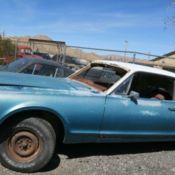 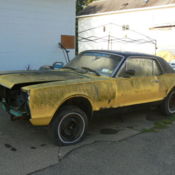 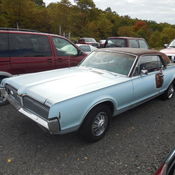 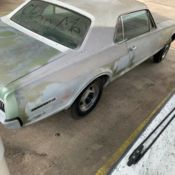