Hi,
I am selling my 1985 GMC K2500. I have had this truck for 21 years and have built it with the intention of keeping it. I am the third owner. The truck has been a great truck, and never let me down! I do not necessarily want to sell it, BUT it is more truck than I need and want to pass it on to someone who will use it more like it was built to be used!
The mileage is incorrect, as the speedometer has been replaced.

I am going to list the highlights of the truck, in no specific order since it will be easiest this way:

Engine: 454 rebuilt some years ago, .030 over, hypereutectic factory replacement pistons, Vortec heads, Edelbrock Performer EGR intake, with freshly rebuilt quadrajet by National Carburetor bolted on a week ago (still fine tuning it). I recently replaced the cam with a Lunati Voodoo cam, #10110701. It pulls like a freight train off idle through 4500+ rpm. The block is a 2 bolt out of a motor home with ARP main studs. It also has a 7 quart oil pan and Thorley Tri-Y headers with air injection. It has an oil cooler and power steering cooler. It has a power steering filter and coolant filter.

The truck has two batteries with a Painless Wiring relay kit.

The truck has the venerable SM465 trans. It has a 10 spline main shaft attached to an NP205 case with a 32 spline front output and 1350yoke. From there, it connects to the rear end with a 2 piece shaft.

The rear end is a 14 bolt with a Grizzly Locker and 4.56gears with a Solid Industries nodular cover. It has a 1410 yoke and a crush sleeve eliminator. It has 13x3.5 rear drum brakes.

The front end is a Dana 60 with a 1350 yoke. It has a Powertrax drop in locker and 4.56 gears. It has a new Yukon nodular cover. The front also has Warn Premium hubs. The brakes are dual piston calipers (I also have the old single piston calipers as well) that come with it.

It has hydro boost and a C3500HD master with a 40mm bore. Additionally, it has braided steel flex hoses.

It has a factory front sway bar and I adapted a factory rear sway bar to it.

The truck has a home made onboard air system consisting of a York compressor leading to a 5 gallon tank under the bed. It has fittings for air tools and a regulated air source. It also powers air horns and is monitored by a factory air gauge in the dash.

Tires are 315/75r16 Armstrongâ€™s mounted on aluminum aftermarket wheels and balanced with beads. The tires are a few months old with less than 500 miles on them.

The interior is fair. Carpet is a couple years old and in good shape, and the seat has wear, but not worn through. Couple of small burns and cuts in the headliner (I do not even remember how or when those happened). There It has power windows and door locks which work. The truck also has a factory medium duty tach and fuel gauge. The factory AM/FM/Cassette radio works, but the tuner knob slips from time to time while changing stations. The truck also has an electromagnetic gun rack behind the seat. The dash pad is cracked, but the truck has a dash mat.

It has a Craftsman tool box, which is less than 2 years old. The bed has a plastic liner and rubber mat. The truck has a hydraulic crane in the bed (which has saved my back many times).

The truck has a Harbor Freight 12,000 pound winch mounted behind the factory bumper.

I also have a lot of extra parts including front and rear bearing kits and 3.73 gears with associated carriers for both axles. I also have an extra pair of heads and gauges.

The truck also has roll on bed liner along the lower portion. The body has minor dents and dings. I have used it as a truck and that was one of my favorite parts of this truck. I could load anything into it without worrying about it and was confident that the truck could handle it!

The engine has a sticking lifter. It ticks sometimes when cold, but goes away in less than a minute. I put in Jegs lifters when I did the cam. I have a new set of Melling anti pump lifters and intake gasket set to go in, just have not had time to replace them yet.

Minor rust spot under windshield molding. About 3â€x3â€ piece of firewall cracked near parking brake cable. I cut it out, riveted in sheet metal, and reinforced it. The body has small dents, minor rust on the hood, and minor rust on one of the cab corners (you have to look for it to see it). The truck has been spray painted black.

AC does not work. I replaced the system last year except for the compressor and condenser. I charged it and it leaked out from the area of the evaporator. I never chased down the problem since I do not use AC in this area.

The truck will likely have problems with smog in California due to it being a big block. If you are out of California, please check your smog laws. It does not need catalytic converters due to HD emissions.

I have done my best to accurately describe the truck. After all these years, it is easy to forget some things. I am doing my best to give the most honest descriptions and would be happy to answer questions or send more photos.

I have a clear title in my name. The truck is for sale as is where is. I am happy to help arrange shipping, but it is ultimately the buyer's responsibility. 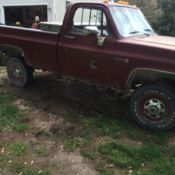 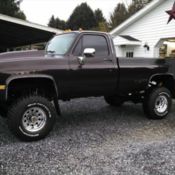 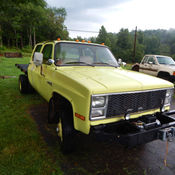 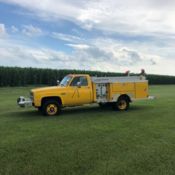 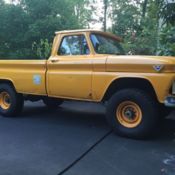 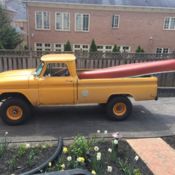 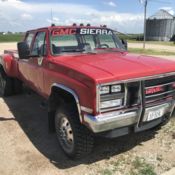 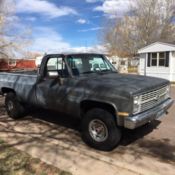 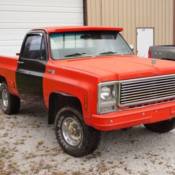 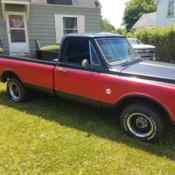