The Ford Mustang is beloved around the world, a car that seems to live in the dreams of almost everyone who has longed for V8 power and timeless style. And no Mustang talks directly to enthusiasts better than the 2+2, better known as the â€œfastback.â€ A late introduction to the lineup in 1965, it became an instant hit, adding an edge to Fordâ€™s friendly pony car that created the Mustangâ€™s performance image. Just as easy to individualize as its coupe and convertible siblings, the 2+2 also added a bit of practicality with a folding rear seat that created a giant cargo bay. In short, if you want a collector car that does everything well, it makes sense to shop for a Mustang fastback. This handsome Vintage Burgundy 1965 Mustang fastback wears a quality restoration thatâ€™s maybe 10 years old and still looks great. It isnâ€™t completely by the book, but it isnâ€™t radical either, adding a few upgrades to deliver things that Mustang fans want without big changes that would change its personality. Up front youâ€™ll find a set of GT fog lights, although this isnâ€™t a GT, and we like the look. Laser-straight bodywork shows quite well and with modern urethane paint it has a deep shine that shows off quality bodywork without the usual ripples and waves of sub-standard jobs. Vintage Burgundy is a fantastic color on the Mustang, elegant without erasing the 2+2â€™s performance attitude and the modern finishes give it a wonderful glow out in the sun. Youâ€™ll note that panel gaps are quite good, including the trunk lid, which is always tough, and all the factory emblems and badges are where they belong. Bright chrome bumpers look great against the dark red paint and this car comes by its â€˜289â€™ emblems honestlyâ€”it was born with a C-code 289 (more on that in a moment). This really is a pretty car. Basic black buckets were also this carâ€™s original spec, and the interior was correctly restored with the rest of the car. Reproduction seat covers, new carpets, door panels, dash pad, and more all give it a crisp, fresh look. A woodgrained steering wheel warms up the monochromatic interior and youâ€™ll note that this car carries a proper Rally-Pac with the sweep-style tachometer that was used on early cars. Thereâ€™s a newer Jensen AM/FM/cassette stereo head unit that powers speakers in the custom kick panels and in the rear side panels, so it sounds great. An aftermarket center console offers a pair of cup holders, which is a nice upgrade for cruising and there are embroidered floor mats to protect the carpets. Thereâ€™s very little wear and everything works, including the courtesy lights and gauges. In back, the trunk is neatly finished with black carpets embroidered to match the floor mats, and it includes a matching spare tire cover. The fifth digit in this carâ€™s VIN is a â€œCâ€ which means a 289 cubic inch V8, 2-barrel carburetor, single exhaust, and 200 horsepower. During the restoration, this one was upgraded to â€œAâ€ code specs, which includes a Holley 4-barrel carburetor and matching intake manifold, plus dual exhaust with long-tube headers. We donâ€™t know the exact horsepower, but this rejuvenated V8 is smooth and torquey, making the lightweight Mustang feel quick and agile around town. The engine bay is nicely dressed with accessory finned valve covers and a matching oval air cleaner, and the block and heads have been painted black the way the factory specified. An export brace reinforces the shock towers and makes a noticeable difference in front-end feel. It also has a correct radiator with fan shroud (usually missing on vintage Mustangs) and a later distributor to light it up. It starts easily and idles well, and it snarls like a Mustang should through twin Flowmaster mufflers with chrome tips. On the road, it accelerates easily and the C4 3-speed automatic transmission shifts cleanly without any dramaâ€”this Mustang is a relaxed cruiser when thatâ€™s what you want. In back, 2.80 gears make this a great highway car that doesnâ€™t mind road trips. Mustang enthusiasts will be happy to see original floors with no patches and rocker seams with original spot welds clean and highly visible. The torque boxes are solid and havenâ€™t been twisted by abuse and aside from a dent on one of the front frame rails from what looks like an errant jack stand, the support structures are solid. It looks like the rear end was once painted the same burgundy as the bodywork but that would be easy to refinish in black. Thereâ€™s also a new gas tank hanging out back, newer shocks at all four corners, and recent leaf springs in the rear. Itâ€™s not shiny and perfect, but itâ€™s great for driving so you wonâ€™t have to think about it ever again. And yes, it has drum brakes at all four corners, but theyâ€™re plenty effective and donâ€™t pull or pulse. 15-inch styled steel wheels look awesome and carry 205/60/15 BFGoodrich T/A radials all around. Extras include an ownerâ€™s manual, heavy-duty fan, and a stock steering wheel. We have a lot of visitors to our showroom and whenever they see a vintage Mustang, they always say, â€œAw, I wish it was a fastback.â€ Well, here it is: gorgeous, comfortable, fast, and ready to enjoy. These are very user-friendly cars and if you can have just one old car, we might vote for this appealing fastback. Call today! 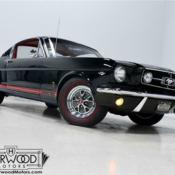 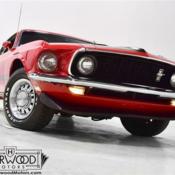 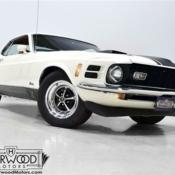 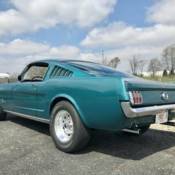 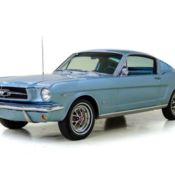 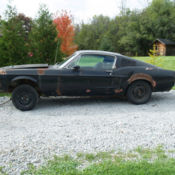 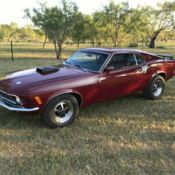 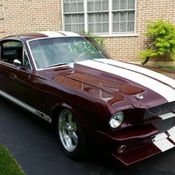 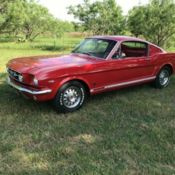 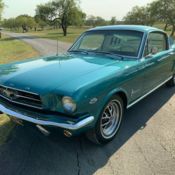