The recipe is simple: take one vintage Mustang, add a V8, fill it with accessories, then dress it in handsome blue paint. In reality, the application of the recipe is somewhat more challenging, but this 1968 Ford Mustang coupe absolutely nails it. This pony isn't about investments and numbers-chasing, it's about traditional Mustang performance. And a big part of that appeal is making one of the greatest designs of all time into something that makes people stop in their tracks. This great-looking blue Mustang is extremely well done and it's likely that no 1968 Mustang ever had paint this shiny on the showroom floor. It's quite fresh, having been completed in the not-too-distant past, and the subtle color suits the low-key coupe just fine. Look closely and you'll find a few minor flaws, but I'm pleased to see that they let the original shape speak for itself, and it speaks beautifully. Gaps are very good, the panels are straight, and there aren't many Americans who can't imagine themselves behind the wheel of this coupe. Chrome and stainless is quite nicely done, giving this coupe a high-quality look that isn't just an illusion, with some parts, such as the door handles, likely being original. Forget show cars, this one is built to drive and you'll love the way it looks going down the road. The fairly stock look inside is a result of blending original and reproduction pieces seamlessly to give it a very inviting look. Most of the soft components are recent, including the seat covers and carpets, while the door panels appear to be reproduction pieces that look right. WE like the no-nonsense look of this coupe, and that includes the shifter right on the transmission tunnel. For entertainment, there's a powerful AM/FM/cassette stereo, although if you're like many of us, you'll never use it. The big three-spoke steering wheel is an aftermarket piece that seems right at home here, and the original gauges are still keeping track of things under the hood. The neat trunk is finished with a reproduction mat and thanks to the slightly larger size of the 67-68 cars, there's plenty of room for your gear. The VIN says this car should be carrying a 289 cubic inch V8 with a 2-barrel carb, but at some point it acquired a great running 302 cubic inch unit instead. It's a direct swap and if you don't check the numbers, nobody will ever know. It was bored .040 oversize during the rebuild and includes an Edelbrock intake and 4-barrel carburetor as well as a set of long-tube headers to help add some extra power. Equipped with a chrome dress-up kit, the car delivers on the performance promises made by the appealing blue paint. It runs extremely well, with smooth torque befitting the semi-formal coupe, but a ripping performance soundtrack when you're running hard. The C4 3-speed automatic transmission shifts crisply and makes this an effortless cruiser and the brakes have been upgraded with a dual master cylinder for safety. A mellow-sounding dual exhaust system gives it that traditional Mustang sound and it sports dual chrome tips under the rear valence, which is correct for 1968. Period Torque Thrust wheels look right and carry 215/70/15 BFGoodrich radials. This is the Mustang you've been dreaming about since you were nine years old. Go ahead; at this price, it's about time you owned a Mustang. Give us a call today! 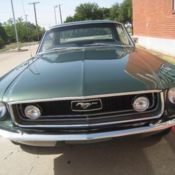 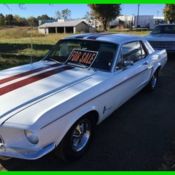 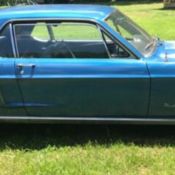 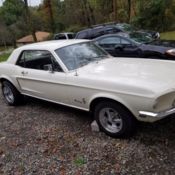 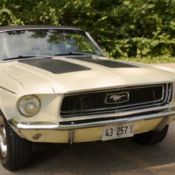 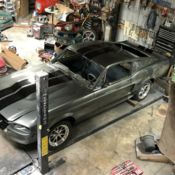 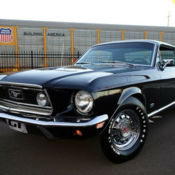 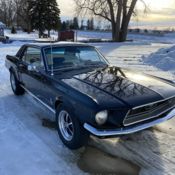 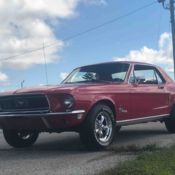 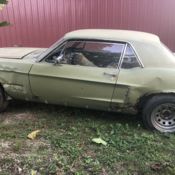