Some of our favorite creations are the cars that the factory could have built but didn't. This 1969 Dodge Dart Swinger Tribute is such a machine, a street version of the lightweight cars Chrysler built to dominate the strip. With 408 cubic inches, B5 Blue paint, and a power-to-weight ratio of, say, a cruise missile, it's one man's ultimate Mopar.
Dodge's flyweight Dart proved the old adage that taking weight out was just as effective as putting horsepower in. But what if you did both, then painted it Mopar's favorite color, B5 Blue? Well, you'd have this incredible Dart. Built from a rust-free V8 car, it was treated to the best of everything, professionally engineered, and fully sorted on the mean streets. The little Dart Swinger is one of Chrysler's best styling efforts, clearly Mopar but not ashamed to be mid-sized. A few additions get it closer to its Mopar roots, including that aggressive hood, the painted-on rear 'Dart Swinger' bumble-bee stripe, and that smooth white vinyl roof. The brilliant, borderline show-quality paint means that keeping it on the DL is going to be a challenge, a finish so darn nice you might be scared to drive this car fast. That's until you hear the motor fire up, but more on that later. All the chrome was refinished or replaced to high standards as well, the stainless was polished, and there's just no such thing as a 'compact' muscle car that ever looked this good.
The interior is wonderfully classic car basic, wearing two-tone blue vinyl upholstery, which includes a pair of comfortable benches with plenty of room for friends that like to go fast. The Dart's original dash was retained, as were all the simple gauges, but they're augmented with a column-mounted tachometer and oil pressure gauge under the dash that look suitably vintage, and they're both a good idea with almost 315 horsepower on tap for this lightweight Dart. There is no radio and I'm disappointed that you'd even ask, because the sound of the V8 stroker should be more than adequate. The stock column shifter remains in place, now managing the below 727 Torqueflight below, and topping the column is a 3-spoke steering wheel with a Road Runner 'Beeb Beep' horn cap. Options were always slim for the economy Dart, but this one actually boasts a factory A/C setup, and although all the equipment appears to be in place it will need to be hooked up and serviced, as the prior owners weren't in the habit of pulling any power away from the monster engine living under the hood. Out back, the surprisingly spacious trunk was coated with a blue-tinted spray-in bedliner for ultimate protection, and then dressed up with a reproduction mat for a correct look.
Powering this little Mopar is not-so-little 408 Stroker V8 with only 7,502 miles on the clock, producing nearly 315 horsepower according to its most recent Dyno test. Built for combat with Mahle pistons and rings, a Howards hydraulic roller cam, a Holley 4-barrel carburetor, long-tube headers and 10:1 compression, it's responsive and powerful, lifting this lightweight Mopar down the street with relative ease. And with an Edelbrock open-element air cleaner and a set of Mopar Performance valve covers atop the HEMI orange painted block, it's both scary fast and beautiful to look at inside the blue engine bay. The inner fenders and firewall have been smoothed and painted, all the plumbing and wiring was neatly organized, and a big aluminum radiator keeps the whole show nice and cool. And with upgraded power steering and power front disc brakes, the car remains quite street-friendly. The transmission is a recently rebuilt 727 Torqueflight automatic that's armor-clad with a shift kit, and it feeds an 8.75 rear end with 3.55 Sure Grip gears inside. The custom exhaust system is a work of art all by itself, with long-tube headers feeding an X-pipe dual pipe set-up that menacingly burbles through a set of chambered mufflers. The floors are finished and undercoated for further protection and an upgraded look, and maintained suspension components are found throughout. It even captures the vintage race vibe with American Racing "Bullet Hole" racing wheels and staggered 225/60/14 front and 245/60/14 rear BFGoodrich T/A white-letter radials.
With only 7,502 miles on the build, this is one brutal performance Mopar that you can buy with confidence and enjoy with impunity. Call today! 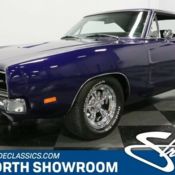 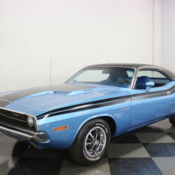 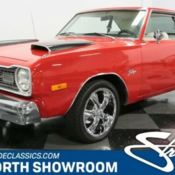 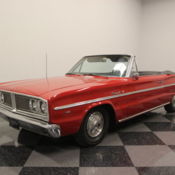 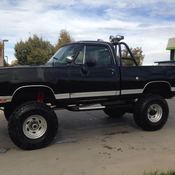 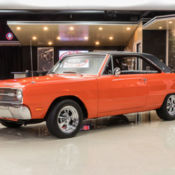 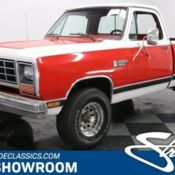 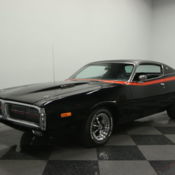 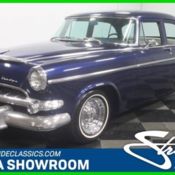 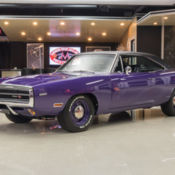