Underneath the deep luster of PPG’s black paint resides an all steel 1947 Dodge Pick-up. The tail gate and running boards are custom yet all steel. Using a 1979 Lincoln Versailles for a donor drivetrain, its 351 Windsor, C4 transmission, and disc brake equipped 9” rear end was utilized in this build. The frame is completely boxed in to give it rigidity. Fatman Fabrications tubular control arm Mustang 2 front suspension kit was installed along with a four-link rear suspension set-up dampened by QA1 coil-overs on all four corners making this truck handle like a modern car. The 351W built by Proformance in NJ is 9.5:1, roller rockers and lifters, comp cam, ported and polished heads, and runs pump gas producing just shy of 400 HP and north of 400 Ft/Lbs. of Torque. Matched to a TCI built C4 Trans with a 3000 RPM stall converter this light little truck will surprise most. Open up the electronic exhaust dump valves when you need it to really breath or just draw attention. Due to the performance aluminum radiator this truck never has ran hot. Nobody likes it too hot, so Vintage Air was installed and blows nice and cold. The Dodge was wired using a painless harness and a GM tilt column making it a bit more comfortable to drive while sitting on a red leather Tea’s bench seat. A custom cluster was made up using VDO gauges, power windows and shaved door handles giving it those finishing touches one would expect from a premium build. Speakers have been installed in the red leather overhead console. Custom wood bed with stainless bed strips and a polished fuel cap finish out the box. 18” X 8” up front with 20” X 10” in the back exemplifies that altitude is attitude.

Fatman Fabrications used this truck for their advertising and it has been featured in magazines. These magazines, dyno sheets, and any other paper work that pertains to the build will be included in the sale.

“The story behind the logo is my Father-In Law has a small farm just outside Bowling Green in Sparta, Va. He needed a banner to represent his produce business and to hang on his stand at the farmers’ markets. He told me he wanted a 40-50’s style pinup girl to represent his business because he specialized and grew several different types of melons which he would feature as his prized produce…therefore, he wanted a buxom pin up girl like the ones on the WW II bomber nose art to get his message across, which was, “where the melons grow naturally big” I created what you see on the door using Photoshop and he hung the banner around his stand to get attention at the farmers market in front of the Court House in Bowling Green. His idea was to put that message/design on the ‘47 because it was black and would stand out on that truck.” 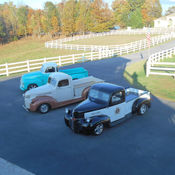 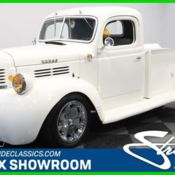 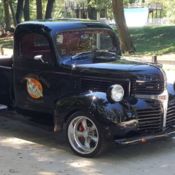 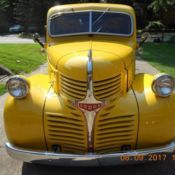 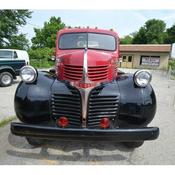 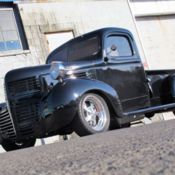 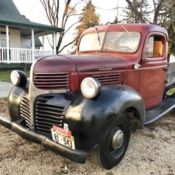 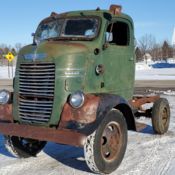 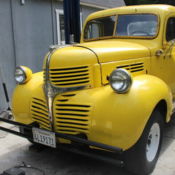 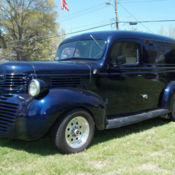