You can't help but smile when you see this 1967 Chevrolet Camaro RS/SS Tribute Convertible - a great looking, beautifully presented, open-air muscle car that's in top form in all respects - inside, outside and under the hood. It's benefitted mightily from a thorough restoration that's brought it to this head-turning condition and features a smooth-running 327 V8 motor, comfortable A/C interior, and a stylish red-on-black color combination that somehow manages to jump right off the pages of our website. Take a closer look but do so with haste, because slick vintage droptops like this 1st generation Camaro never last long.
Bolero Red is the bright and exciting color you see adorning this convertible, which has also been properly decked out with the signature black RS stripe circling the nose of the car. The shade graced many a classic Camaro back in the day and it looks great on this particular droptop, showing a nice shine and a clean overall condition that's very impressive for the price point. It's not a trailer-queen show-stopper, but rather a head-turning top driver-quality car that's bold enough to strain a neck or two when it's cruising down Main Street. The front grille is well aligned and houses the signature hideaway headlights that were one of the primary attractions of the RS appearance package and they are in great working order. The body alignment is very strong from all angles on this classic Chevy - the SS-style hood matches up well with the fenders to either side, and the doors, hood and decklid sit nice and flush. The exterior fittings throughout also present well - both the front and rear bumpers are unblemished and well-aligned and the trim running along the rocker panels and surrounding the windows looks nice and fresh. At first glance, you'll almost certainly picture yourself out on the road with just the sky above you, but rest assured that the black vinyl convertible top raises and lowers smoothly and is also in great shape.
The Deluxe black vinyl interior has been restored to an impressive condition while retaining its properly vintage appearance. From the looks of things, not many people have ventured into this cabin - both the front buckets and rear bench seat show almost no perceptible wear and they loom over black carpeting that also looks to have been replaced not long ago. A beautiful 3-spoke steering wheel sits on the column displaying the signature SS horn button, and it rests atop a tilt steering column that adds good space for the driver. Just beyond it, the dash area features a supple looking, uncracked dash pad over the top - always an especially welcome sight on a convertible - as well as an assortment of functional gauges in its cluster, and an aftermarket arm rest and cup holder rests atop the factory center console, which is another defining styling feature of the Camaros from this era. Air conditioning was a fairly rare option on convertibles from so long ago, but it's on board here and it's been upgraded for optimum performance with R134a refrigerant. In back, the trunk area is lined with plaid vinyl, as is the spare tire, and a fresh rubber seal sits under the deck lid to keep the elements from intruding.
The engine compartment underneath that SS-style hood looks showroom fresh and houses practically the very same 327 cubic inch V8 this Camaro drove off the showroom floor with, along with a TH350 3-speed automatic transmission that it's mated to. The powerplant has been spruced up with fresh Chevy Orange paint and really looks nice sitting among the freshly cleaned components that surround it. It decodes to 220 horsepower block from the period, and with only approximately 1,500 miles on the build it is running very strong - just think about what a blast it would be to get this Camaro home and get right out on the road. Hedman headers feed into a dual exhaust system that sounds fantastic, and one look underneath at the clean undercarriage is immediate proof of a long life lived easy out of the elements. Power steering provides easy navigation, while power brakes that feature discs up front bring dependable, fade-resistant stops as this unusually sharp Chevy cruises on its set of 15" Rallye wheels outfitted with BFGoodrich T/A white-letter tires.
This 1967 Chevrolet Camaro RS/SS Convertible tribute is a skillfully restored, open air example of one of the most pivotal muscle car models ever to put rubber to asphalt. Call today! 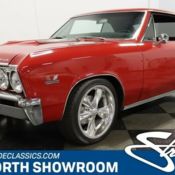 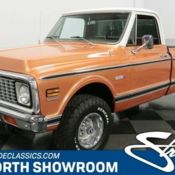 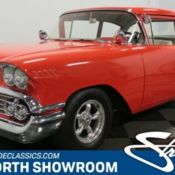 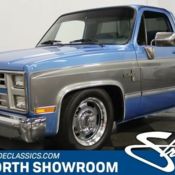 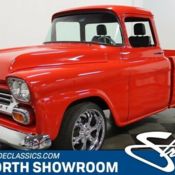 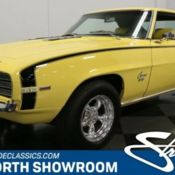 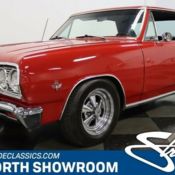 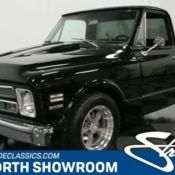 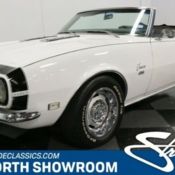 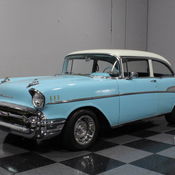