1966 Nova with SS bagging super nice driver not a show car
Here is the story behind the Nova this was a friend of mine who turn me on to the Nova who knew the guy who was involved in the restoration possess of the car that took at last 10 yrs or so to do there was a lot of money and time spent on the Nova.
Unfortunately the owner of the Nova and his partner where forced to sell due to health issues sad to say he passed away. So his friend decided he wanted to sell the car I got first option on the car to buy could not pass it up even though I really did not need another car I have to many at this point.
The Nova started out as a 6cyl car the factory tag is in door jam but missing trim tag which i am in the process of getting he took it off when restoring the car. The Nova was blue with blk interior 5 yrs ago they installed the new engine and 4SPD and 10 blot posi rear end then was driven off and on to car shows about 1000 miles on the car since when he drove it.
At that point was about 90% done driving the car while still working on finishing certain small things that needed to be done on the car also have the factory shrou, L-78 air cleaner and valve covers new in box to with the car .
The owner got sick and decided to stored it away with a cover when found it was dusty & dirty in a building where it sat for over 2yrs this is where I purchased it from I have a pitcher of it in my auction . Don't know much about the car other then what I was told and i have not had it long and only test driven it a short distance of about 50 mile round trip ran super drove nice and ran cool in 90 degree weather then clean it and detailed the Nova up for sale . Everything was restored or replace new front to back and a lot of money went into it again this is not a show car could be if you take it to the next level.
The Nova has great potential but needs some small things to be gone over and fixed and finished that where left undone such as turn signals, horn dose not work doors could be adjusted better these Nova's where known for door adjustment again this is 50 yr old car to be expecte, glove box lock, dome ligh, sun visor redone just never installed,4spd console needs mounted to floor also needs installed the rubber seals around doors I have them just small things to be finished up easy fix!!.
Drive train !! Have receipts on the engine
New professionally built SBC 350 with a DZ-302 GM l-78 steel crank from Chevy over 8000 in motor by it self nothing cheap here !! roller Comp cam forged pistons 9 ½ comp eagle rods World Product street heads Harlem sharp roller rockers balanced much more have recites has a rebuilt M21 -4spd with steel scatter HD street clutch easy to push in. The car sounds nice with that solid lifter sound to it and sound’s mean though the exhaust mechanically this car was done nice!.
Rear end new rebuilt 10 bolt auburn posi 373 gears 4 wheel disk brake set up new exhaust with cut outs frame ties welded in new tires new front & rear suspension was replaced or updated new as well.
Paint still real nice not perfect has some flaws through out to be expected from driving and being stored away such as a scratch in passenger fender some nicks here and there and bottom of the drivers door has a small spot also there is a gas stain by the the gas cap after waxing it seems to diminish away easy fix!! hard to see just being honest. The Nova shows real nice for a older paint job again not a show car needs to be taken to the next level would not take much just being honest.
Interior was all new carpet, seat covers, door panels,head liner all redone one sale panel in back needs smooth en out from sitting Factory rare radio delete plate in dash factory wood steering wheel
The only reason for the sale of the car is have to many cars running out of space this is a super nice Nova sold as is. I set the reserve low! ask questions be for you bid wont find another or build one for where my reserve is set at the 66 or 67 year Nova's are hot dose not matter if it was a 6cyl or v8 there going up every year.I represented the car to my best knowledge to what is know and honesty my feed back speaks for it self. Sold as is ask questions before you bid
On Sep-16-19 at 21:59:05 PDT, seller added the following information:

Clear titl, gas gaug, mechanical oil & temp, gauges wor, speed o cable was not hook up when i got the car needs a new dash speed o cable. The original mileage shows 71,240 actual on the title now exempt it was set to 0 from the dash being restored to new condition it shows in my auction 000000 as I stated. This is what most do when they restore a dash most speed o's on old cars are exempt and non actual or don't work because of age I was going to put a tack in it for now just did not get the time to do so easy fix . ( park light, running lights, dash light, head lights high beam all work glass is nice shape with some small imperfections to be expected for its age chrome is nice trim is nice, gaps are nice for being over 50 yrs old again not a new car as I stated in my auction not a show car or perfect it is a super nice driver that needs some things done. Also i have the right to sell out side eBay got a lot interest in the car.

Here is more information i was asked on the car ?1) wipers work2) no oil leaks at all
3) dash heater switch and blower motor is all there and work not hook up to engine
4) The body is super straight
5) has new air shocks with separate lines6) New high out put distributor and coi, plug wires and plugs just put in
7) New alum chrome valve covers not cheap! with new gaskets
I have had a ton of emails on this car it was restored about 10 yrs ago and a lot of money put into it from previous owner and the new motor trans was put in 5 yrs ago and10 bolt was also rebuilt .The last car show it was at was on 8/12/17 then it was put in storage since I purchased the car. This Nova like I said is super clean and has great potential I am very picky to me this is a super buy for what I am asking on my reserve. I have about 7 seven car I own and some are close to 100,000 what i have in them I do not mess with junk there's a lot done on the Nova thanks 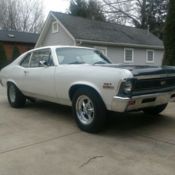 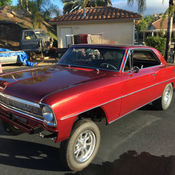 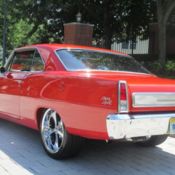 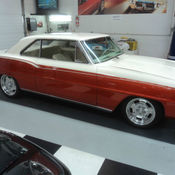 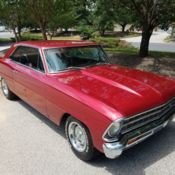 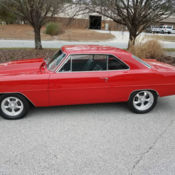 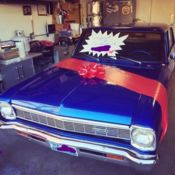 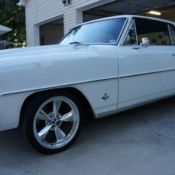 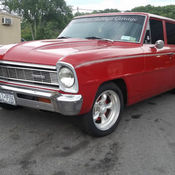 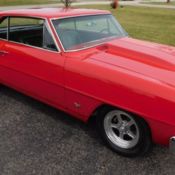