This 1969 Chevrolet Camaro is one of those cars whose list of modifications is so extensive that it's impossible to know where to start. Small block power, trick suspension, 5-speed transmission, and high-impact paint, all just for starters. If you've been looking for a take-no-prisoners early Camaro, this nasty '69 just stepped up and volunteered for duty. There's nothing subtle about the bright yellow paint with a black interior, but it's a classic combination that offers a bit of tradition, but this is hardly a sleeper. The shape is pure Camaro, but the sheetmetal has been cleaned up a bit with shaved emblems to make it look super slick. Nothing major, but it's the little stuff that makes the biggest difference. To get these results, they focused on making sure everything was crisp and well-detailed, including the creases coming off the front fenders that look sharp enough to draw blood. The two-stage urethane paint gives the car a high-tech look and a brilliant shine, which certainly fits it well enough, and the lean Camaro shape looks pared down to its bare essentials. No stripes were needed and it doesn't even have fake SS badges, because the way this car looks and sits, it would be redundant anyway. There's a blacked-out grille as if to imply this car might have been an SS at some point, and the chrome bumpers are shiny enough to make this car look like a show piece if you didn't already know better. The black interior is nicely done and has been lightly modified just like the exterior. The high-back buckets look stock at first glance; they have been rebuilt and now wear reproduction seat covers with newly mandatory headrests that transform the Camaro's interior. A four-spoke billet wheel on a tilt column is a nice upgrade over the original and makes it a lot more comfortable. Custom Auto Meter gauges were stuffed into a Detroit Speed instrument panel that was color-matched to the bodywork and topped with a fresh dash pad. Look a little closer and you'll note that the shifter now manages five forward gears instead of the usual four, but we'll get to that in a moment. There's also a modern Panasonic AM/FM/CD stereo with speakers on the rear package shelf, but if you're doing it right, you'll never need it. The trunk is detailed correctly with a new mat and full-sized spare tire assembly. But the big changes are underhood, where a 350 cubic inch crate motor was neatly transplanted into the Camaro's engine bay. It's built for fun with a big cam, new crank and bearings, Holley 4-barrel carburetor on an Edelbrock Victor Jr. intake manifold, Dart Sportsman II heads, and it looks like a million bucks with all that chrome and billet aluminum. There's a big radiator up front, an electric fan, and the firewall has been smoothed to give it a very sanitary look. The transmission is a Tremec 5-speed manual that spins a GM 12-bolt rear end with fairly steep gears that make it punchy around town but easy to tame with the overdrive. Hotchkis suspension components, subframe connectors, and upgraded front disc brakes. The finishing touch are those gorgeous 17-inch Torque Thrust wheels, which carry 235/45/17 front and 255/45/17 rear performance radials. These words don't come close to telling the whole story on this incredible Camaro. Come see it for yourself and you'll probably discover that there aren't many things on this Earth that you want more than this car. Call today! 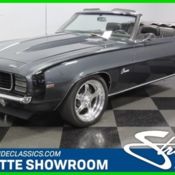 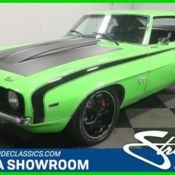 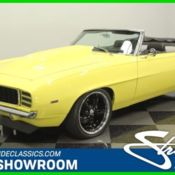 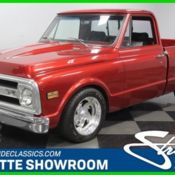 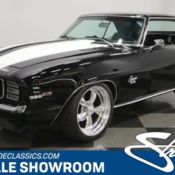 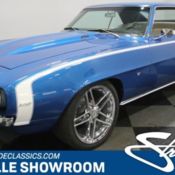 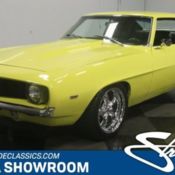 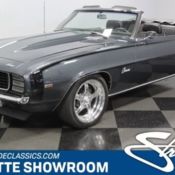 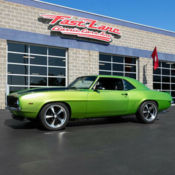 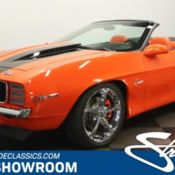