Trucks like this are from a simpler time. These Advance Design series trucks were the first ones to get the assembly lines rolling again for civilian purposes in 1947 after WWII. 1954 saw several significant improvements made to them, and the first three months of 1955 saw the last of this series produced and sold. That makes these '55s particularly rare and sought after. These trucks were desirable back in the day because they were well designed, reliable work trucks. That's what made them the number one selling truck in America. They are desirable now because they look cool, drive well, and are still useful as reliable pickups. This one has been recoated in a nice shade of Maroon that really catches the light and shows off the smooth curves of the hood, fenders and cab. Up front, the grill is a crossbar style often referred to as the bull nose design. This one looks particularly sharp in chrome against the maroon with Chevrolet in black letters embossed across the top of it, a blue Chevy bowtie ornament above it on the hood, and a simple chrome bumper under it. A one-piece windshield was a nice update from the split ones on the early models, and the curved corner glass at the back of the cab is awesome. The wood of the bed looks great with the maroon and another sharp bumper underlines the fold down tailgate. Open the door and you will find a sharp looking interior done in Black and Maroon. The door panel itself is primarily painted metal with a black trim panel backing up the door handle and window crank. Notice the bowtie step plate on the running board as you climb in and settle down on the nicely reupholstered bench seat. There is a stylish 3-spoke steering wheel with a suicide knob to assist in tight parking lot maneuvers with the shifter for the 3-speed manual transmission mounted on the column. The dash is very simple. It's trimmed in black across the top with two round gauges in front of the driver. A speedometer is on the right and gauges for fuel, water temp, oil pressure and voltage are on the left. An AM/FM/CD player is mounted under the dash for your listening pleasure, and the headliner is trimmed out in black which helps keep the noise down in the cab. Under the hood you will find a 235 cubic inch straight 6-cylinder engine nestled down in a neat and clean engine bay. These engines are simple, reliable, easy to work on, and torquey too generating 200-foot pounds of pulling power at 2000 rpm. A perfect truck motor. A black oil bath air filter feeds a single carburetor and you will notice an alternator that feeds an updated 12-volt electrical system making lighting better and things like the modern stereo possible. The engine even looks good in blue with Chevrolet embossed into the valve cover and there is an aluminum radiator to keep things running cool. Power flows back through that 3-speed manual transmission and then through a conventional driveshaft on these '55s that replaced the torque tubes from the earlier years. The rubber meets the road through 235/70R15 white letter tires mounted on steel wheels with chrome trim rings and centers. Last of the first series 3100s. Classic good looks in Maroon, chrome and wood. Sweet interior with a headliner and modern stereo. Come on down and check it out. 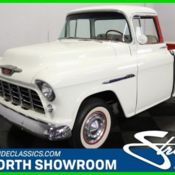 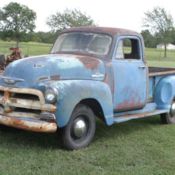 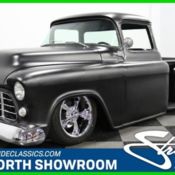 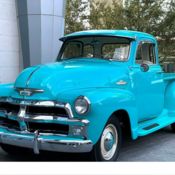 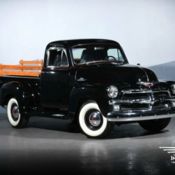 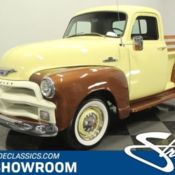 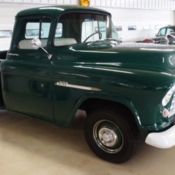 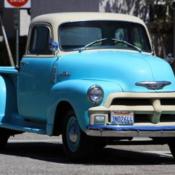 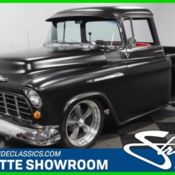 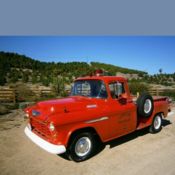