This 1963 Chevrolet Bel Air Restomod gets everything right. The lines are classic, the color is brilliant, the interior is clean, and did we mention the LS1 powerplant under the hood? Add in the air suspension that gives it a slammed stance, and you get an early '60s Chevy that will draw a crowd every time you turn the key.
The paint has that perfect combination of deep color and a correct look, so the vintage Chevy doesn't look too modern yet seems to get more than its share of double-takes. It's from PPG and is called Phoenix Orange Urban Sunset, but even with that name it works extremely well on the elegant Bel Air 2-door sedan bodywork. It doesn't get in the way of the overall look, instead it becomes part of the car's personality, a yin to the engine and suspension's yang, and we love the result. There are a few signs of age and use, but you'll probably find, like we have, that everyone likes to inquire about it. This dark coppery-orange with just a bit of metallic glow really talks to people. All the chrome and stainless trim remains in great condition as well, especially the new stainless spears running down the sides that really dress up the Bel Air. It's not an Impala, so only two taillights per side, and dual antennas on the rear deck always look sporty. With a slight tint to the windows, the car looks sleek, and it really highlights that remarkable curved rear glass in particular.
The interior does the same thing, keeping the original bench seats while adding some modern details. Nice black carpets and door panels certainly help dress things up and the dash is just how it was when it left GM. However, there's now a tilt column with a modern wheel that looks a lot like one you'd find in a '58 Chevy, and a factory tach perched there in the middle always looks awesome (sadly, it's not operational thanks to the LS1 swap). It's been retrofitted with a set of auxiliary gauges under the dash, as well as air conditioning, which uses R134a refrigerant and modern components to be both effective and reliable. A floor shifter adds a sporty vibe and like all Bel Airs of the period, there's expansive room in the back seat. An AM/FM stereo uses speakers throughout the interior and the trunk is clean and ready for your next road trip.
A very clean fuel-injected LS1 swap makes this car feel decades younger. Plenty of power on tap, effortless torque, and bulletproof reliability make it a fantastic addition to this Bel Air's list of tricks. The installation is quite tidy, with most of the wiring and plumbing neatly hidden out of sight. A custom air intake dresses up the front of the engine, as does a big aluminum radiator and some red highlights on the fuel rails. Power 4-wheel disc brakes were added, with cross-drilled rotors up front, and the 4L60E 4-speed automatic overdrive transmission cruises effortlessly at almost any speed. The suspension is low but not so low that it becomes a problem out in the real world and that LS1 sounds fantastic breathing through a fresh dual exhaust system. Staggered Foose wheels add to the in the weeds look, and carry 235/40/18 front and 245/35/20 rear performance radials.
A gorgeous car that's sorted, fast, and ready to enjoy. We're honestly shocked it doesn't cost more, so don't delay and call now! 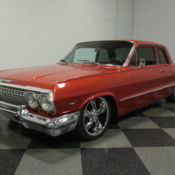 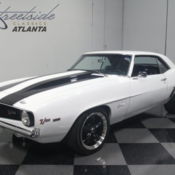 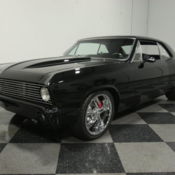 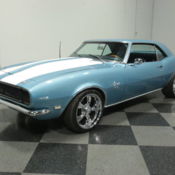 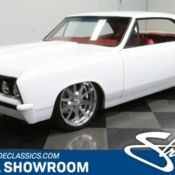 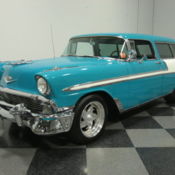 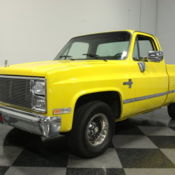 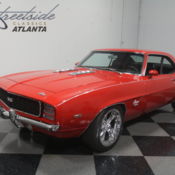 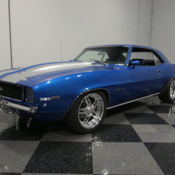 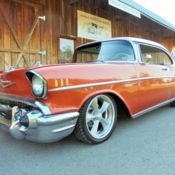