OVERVIEW: I have owned this IX for just under 10 years. Adult owned, 15-year BMW Car Club member.Car maintained to an exceptionally high level throughout. No expense spared. Professionally maintained and has a stack of receipts. Absolute beast in the snow!

EXTRA PHOTOS:I have hundreds of photos to show condition of vehicle, just copy and paste into webpage or google imgur address below:

HISTORY: Just before I purchased in 2008, car had engine block replaced after the original engine was apparently hydrolocked, cracking the block. It had been declared a total loss by insurer and had sat for a number of years. It was given a salvage title at that time. Previous owner found and rebuilt IX specific block and replaced engine, so essentially new engine at 74K, when I bought it. I then went through the inspection process with Mass. State Police to get a new title that is accepted in every state.

MAINTENANCE: What can I say, everything is well maintained. My wife drives car too (one car household)... no way I ever wanted her stuck, so things have always been fixed well before they broke! Case in point. Around 15k miles ago I needednew front axles. Instead of taking a short cut and getting them rebuilt, I had 2 brand new ones shipped from BMW in Germany, for around $1,300 each. Another example to show how this car is maintained, for $225 earlier this year I ordered a new charcoal canister, because the original one was rusty and didn't look good in engine bay. Due to an idle issue that took forever to solve last year, just about everything one can replace in engine compartment was - coil, plugs, cap rotor, wires, both temp sensors, throttle position sensor, air flow meter (rebuilt by Bavarian Restorations), fuel filter, fuel pump, etc.

New battery, alternator, coolant tank, windshield washer reservoir, washer pump, all the hoses/vents between the gas filler and top of tank, all the soft fuel lines in engine bay, the main relays in engine bay, fan clutch, radiator, hood ground strap, throttle cable, hood release cable, hood and trunk badges, antenna grommet Essentially, if I could order it and replace it... I did.

The car starts easily and idles smooth. Would not hesitate to drive anywhere.

SUSPENSION:The IX has the common Bilstein shocks and H&R lowering springs. The front and rear upper strut mounts are relatively new, as are the control arms. The rear also has thicker X5 spring pads on them, which gives the car an level stance... some IX droop a bit in the rear. Replaced sway bar earlier this year because it was rusty, new bushings at that time as well.

AIR CONDITIONING: AC has been converted to R134. Compressor, expansion valve, condenser, and o-rings throughout replaced.

EURO TRIM:The car has euro trim all around, deleteing the turn signals on the side of the bumpers, which cleans the look up a lot. It also has euro front grills and black kidneys. I have the original chrome kidneys if you want them. The car also has the rare euro trunk lid trim panel. The car also has a new Mtech II steering wheel and IS front lip.

SEATS: The original "Comfort" seats swapped out for re-upholstered sport seats, which are heated.

STEREO: The stereo was custom designed by German Audio Specialties and sounds amazing. Kenwood head unit with Sirius, Bluetooth, remote, and mounted microphone for phone calls. Can hook to early iphone/ipod. JL 500/5 Slash amp. Handmade crossovers on each of the speakers. Custom sub box and amp rack with Infiniti 10" ported enclosure. Pointed in to car, so doesn't rattle vehicle like some loud stereos.

WHEELS/TIRES: The car comes with 5 original BMW 15" basketweaves, which were all refinished last year. Not a scratch on any of them. Kumho Ecsta tires. Also set of 4 snow tires on original BMW steel wheels and BMW "snow caps, "? which are no longer even available. It's a beast in the snow!

LIGHTS: The lighting is upgraded to Hella H4/H1 bulbs.

ENGINE: Obviously, a lot of effort has been put into the engine to keep it looking nice. The valve cover and intake manifold were both powdercoated.

EXTRAS: Also includingextra transfer case and front differential(which may be worth around $750-$1,000 on own). Between these spares and the new axles, all you need to pick up is a rear differential and you're covered on the expensive IX bits for a long time. Also spare main ECU, ABS ECU, 2 window regulators, front sway bar links, ABS-Delete kit, new brake bleeding pump, and brake fluid, fan clutch tools, and BMW repair manuals.

CONS: The paint is the biggest drawback. It clearly has had not great paint work done sometime in its life. Looks great from 20' or moving, but up close the flaws stand out. See the pics. If I were buying it now, I might just buy like 30 cans of satin black and spray the whole thing.

ABS system works sporadically. Typically it faults out and the brakes work normally, just no ABS assist. Extra ABS computer included if you want to try and fix it. ABS-delete kit also included if you don't (youtube E30 ABS Delete for instruction video).

Drivers side window regulator is on its last legs. Replacement I pulled from junk yard included.

Noticed oil leak on back side of engine when taking photos of the car for ad, clearly not too bad to not see it on ground when parked etc.

The two flex brake hoses that jump to the rear subframe were not replaced when the ones at the four corners were. Should be replaced next time any work in that area is completed.

SHIPPING: Happy to work with buyer to deliver/ship based on delivery location.

CLOSING:That is it. Sorry for long ad. Labor of love. Really a well sorted, well cared for car... and not rusty like 99% of every other IX out there. Happy to answer any questions. 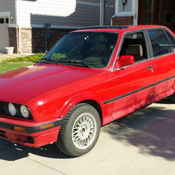 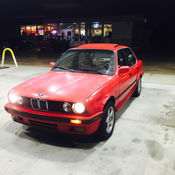 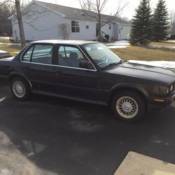 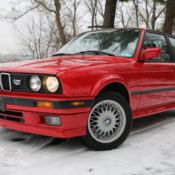 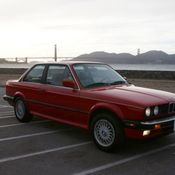 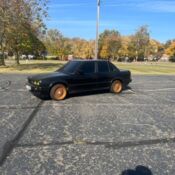 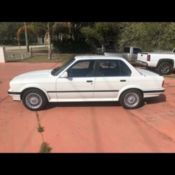 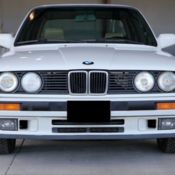 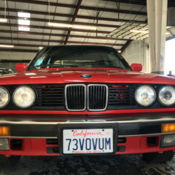 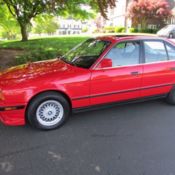