What else can be said about the always-cute, lways-reliable VW Beetle? Finding a clean one today is not all that easy, nd while they're affordable at the moment, iven the way VW Bus prices have skyrocketed, t's probably only a matter of time before the Beetle joins them.This 1978 Beetle convertible represents the waning days of the Beetle. Although they were technically still in showrooms into 1980, he writing was on the wall. Fortunately, W kept the recipe the same, nd it offers the same great looks and fun attitude that had always characterized the charming little car from Wolfsburg. White is a classic Beetle color, nd it accents the clean, traight sheetmetal on this particular example. It shows some patina, ut no damage or signs of neglect, nd for a Volkswagen fan, he look of the rounded shape is timeless, lthough the Super Beetle did offer numerous improvements. Chrome bumpers, versized parking and tail lamps, nd a curved windshield distinguish the Super Beetle, ut it'll never be mistaken for anything else, nd they're in very good condition overall, articularly for a mostly original car.Inside, here's a nicely finished black interior which remains almost entirely original. The seats are supportive buckets flanked by matching door panels that offer handy map pockets, useful feature that disappeared way too soon. The single round speedometer with its integral fuel gauge is highly visible and fully functional, einforcing the Beetle's quirky nature, ut I don't think Bug fans would want it any other way. The carpets are much too nice to be original, articularly in a convertible, nd we're guessing that perhaps the seat covers have been replaced as well simply because they're in great shape. A Pioneer AM/FM/CD stereo head unit has been fitted in the dash, hich also features a burled walnut applique that seems a little out of place here in the modestly-priced VW. Overhead, armann's high-quality workmanship is most apparent in the fully insulated and lined convertible top, hich folds easily and seals out noise almost as well as a hardtop would. The front trunk area is fully upholstered with black carpets that suggest that this little Beetle has been well-loved its entire life.At 1600cc, he VW flat-four isn't going to win any drag races, ut its peppy demeanor and legendary reliability have their own appeal which Volkswagen enthusiasts understand only too well. It's neatly maintained, nd offers a carburetor instead of fuel injection, s most VW fans prefer. There are signs of regular maintenance, nd if you cover the basics, hese cars will practically run forever. It starts quickly with that characteristic VW whistling exhaust sound, nd once you master the notoriously vague 4-speed shifter, ou'll discover that it's a lot of fun to drive. It's mostly original underneath and the floor pans look OK, lthough there's a bit of surface scale on the heavy metal parts. The Super Beetle received an updated strut suspension that actually rides and handles much better than the earlier setup and standard steel wheels wear brightly polished hub caps and correctly-sized Kumho radials.Still inexpensive and fun, he VW Beetle is an iconic car that anyone can afford. Better yet, ts simple mechanicals and plentiful parts mean that you can enjoy it practically forever. Call today! 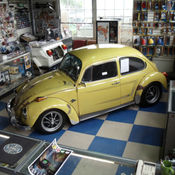 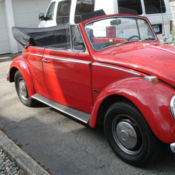 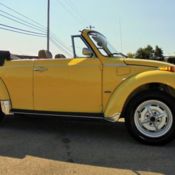 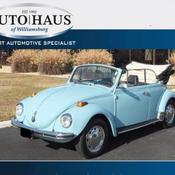 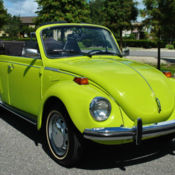 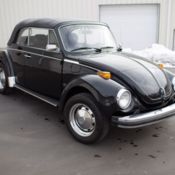 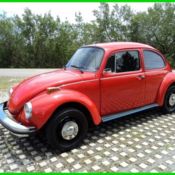 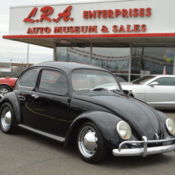 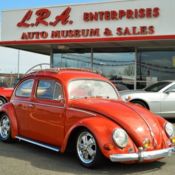