West Coast Classics are proud to present a great daily driving example of this original southern California owner last year 1974 Volkswagen Karmann Ghia Convertible and one of the last ever built examples from 6/1974!
In 1957, the VW Karmann coachwork Osnabruck's assembly line built 105 Karmann Ghia Convertibles which was a landmark design of it's day in ragtop simplicity compared to contemporary British roadsters! VW advertising made much about Karmann's almost hand construction methods, which included filling, filing and sanding all seams before painting. A delicate blend of old-world German craftmanship and Italian soul, this car proved that sports cars were as much about style and grace as they were about performance and almost twenty years later on 7/31/1974, when VW halted production, it had proved to be one of the all-time best selling and most loved sports cars in the world.
This particular example is an original southern California owner always rust free car with all its original floor pans and sheet metal and which was treated some years ago to a full exterior repaint in the striking 'Tropical Green' color and the car has its original White vinyl seats interior with Black carpeting. The car shows very well with only some very minor imperfections noticeable only upon very close inspection in the paint or elsewhere.
Owned for over 46 years by its original southern California owner, it is also extremely rare in that it still retains its all original interior which is in very good condition throughout for its age.
This particular car must be seen and driven to be fully appreciated - a seriously striking example which turns heads wherever she goes! The engine is extremely strong and responsive with excellent oil pressure and no noticeable oil leaks and which sounds absolutely magnificent and the transmission shifts smoothly through all the gears and the engine temperature always remains cool.
The car is also extremely rare in that it proudly boasts its original floor pans and indeed has probably rarely seen rain, apart from the very unusual Los Angeles sprinkle it received whilst having its photos taken last week!
This must be one of the nicest, mostly all original and stock, rust free examples available anywhere of this increasingly collectible and desirable of late model Karmann Ghia convertibles in turn-key ready daily driving, daily head-turning, and daily appreciating condition! 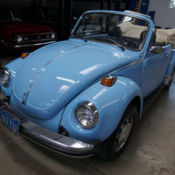