If you ever ran around in a Beetle convertible with your friends when you were young, then you probably have some great memories. If you never had that chance, then here's another one. Or maybe it's a first chance for another generation. They are fun! Drop the top, pile in, and head out. Check it out. This car looks ready to blend right in with the outdoors in its Sky-Blue paint. It's a classic body style that... everybody, no matter how young or old, can identify. There have been more of them produced than any other car ever made, and anywhere you go with the car you are likely to find a community of fans which makes driving these cars that much more fun. By 1974 the cars had gotten a bit bigger, mostly up front with more luggage space, but did it without losing the curves of the fenders and shape of the hood that so defined the look of the car. The dark Blue roof folds up and down easily for protection from rain or intense sun, and also for the winter time, because being a rear engine car, it gets traction that might actually get you up a snowy hill that leaves many new cars stranded. After all, it is snowy and mountainous in Germany where it was designed. Open the door and you will find a nice white interior. Go ahead, leave the top down when you hit the beach or run errands, it won't get that hot. The door panel has a pattern of horizontal pleats and has a nice little door pocket that was added at the same time as a fully carpeted interior which was part of the "luxury" upgrade the Super Beetles received. Part of the charm of the car is how simple and iconic they are, but those two things were pretty nice additions. The bucket seats are comfortable and vinyl, so it doesn't really matter if they get a little wet from a rain shower or bathing suit, and your back-seat passengers will remember the adventure more than anything else, although if it is going to be a cross country trip, they better be young, flexible, and very adventurous! The dash is as simple as it gets with one gauge, the speedo with a couple indicator lights, and a stereo upgrade might be a reasonable consideration for this car. The opposed 4-cylinder engine tucked under the lid at the back of the car was enlarged to 1600 cc's and improved to make more power and be easier to service. But first, let' talk about the sound of that motor. It's as iconic as the shape of the car! It has a distinctive sound you can hear while its pumping out its 60 horsepower and you are shifting through the 4-speed manual gearbox on the way down the street. The suspension was redesigned in the Super Beetles too with a new trailing arm design in the rear and MacPherson strut in the front suspension which really improved the ride and handling. The rubber meets the road through 165/80R15 tires mounted on chrome wheels with chrome VW hub caps for that classic Beetle look. This car is fun! Climb in, drop the top, and head out for some adventures. Come on down and check it out. 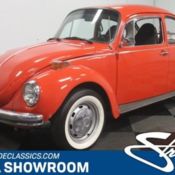 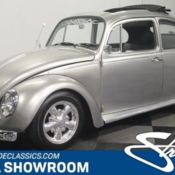 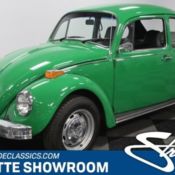 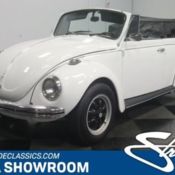 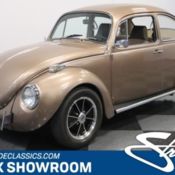 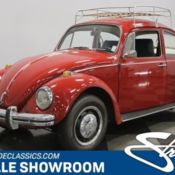 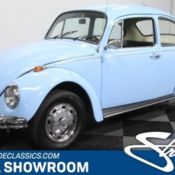 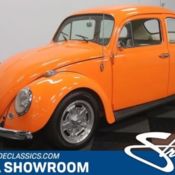 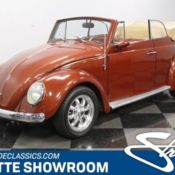 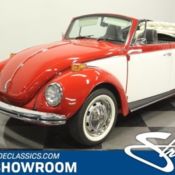