No, it doesn't swim and it doesn't have 4-wheel-drive, but this 1974 Volkswagen Thing is still one of the coolest things on wheels. The Beetle's outdoorsy cousin, the Thing is hard to classify but remains one of those great moments in automotive history where a major automaker said, "Hey, let's do something different." Now the unusual thing about this Thing is that it's in such good condition. Most have long ago rotted away or been abused to the point where they were scrapped, but not this one. A few years ago it was repainted, which suggests that it was always a well-maintained car, er truck, er Thing, and it's holding up rather well. There are some minor nicks and scratches that come from use, because this Thing is always up to having some fun, but otherwise it looks pretty darned good. The sheetmetal is straight, the doors fit well, and when it was painted, they even reinstalled fresh fender welting between the pieces to give it that highly detailed look that's factory-correct. It has new black vinyl stripes along the sides that are totally appropriate with "The Thing" spelled out and the blacked-out bumpers look exactly right. You also get a fold-down windshield, familiar Beetle-style taillights, and a swing-away spare tire carrier that's a lot practical and a little bit fun. In the usual VW fashion, the interior is basic but friendly at the same time. Plain black vinyl bucket seats up front and a bench in back make it a legitimate 5-seater, the kind of car we might have called a phaeton in earlier times. The dashboard is a simple flat sheet that has been painted body color and the familiar Beetle round instrument cluster was stuck in the middle. There are a few other knobs and handles for the secondary controls like headlights and the cigarette lighter, but if you can't figure out how to make this Thing work, you probably shouldn't be driving. There's no radio, a mediocre heater, and not many creature comforts, but that's the whole appeal of the Thing: how basic can we go? There's a black convertible top that fits well enough and dig those cool wood slat floor mats that are perfect for beach cruising. Or just remove the doors and go without, the Thing doesn't care. Up front, there's also a good-sized trunk that houses the gas tank and offers some reasonable carrying capacity. For reliability, there aren't many better choices than the 1600 cc Volkswagen air-cooled flat-4. It's the same one you find in a Beetle, so parts are plentiful, upgrades are easy, and it'll run practically forever with only modest maintenance. This one is very neatly detailed with all the correct parts, including a Bosch ignition system and factory air cleaner assembly. The big generator sill makes the juice, there's a recent carburetor on top, and all the heater ducts are still in place. The 4-speed manual transmission shifts cleanly, although you'll have to get acquainted with VW's traditionally vague shifter, and the gearing makes the Thing feel quick enough in any situation. The body tub and floor pans are in very good order and the suspension is also from the Beetle, as are the painted 14-inch wheels, which carry oversized 205/75/14 radials that look suitably rugged. You don't see many of these, and the good ones really stand out. This one has enjoyed an easier life than most, so it's ready to enjoy. Call today! 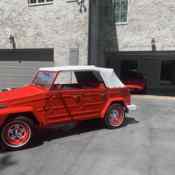 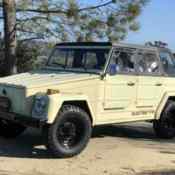 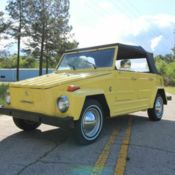 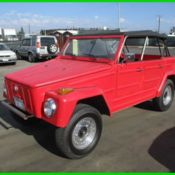 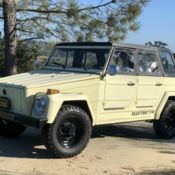 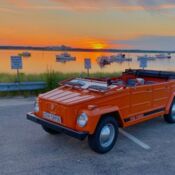 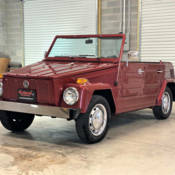 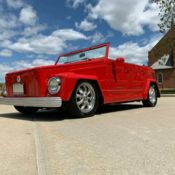 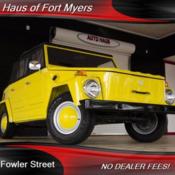 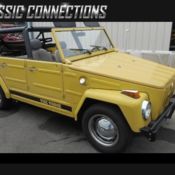