Toss in your surfboard and head to the beach! Nice little 1982 diesel pickup -- runs pretty well and gets lots of compliments. It's unrestored and 35 years old, with all the quirks and worn-out parts you'd expect from that. As a 4 speed, it's geared a little low but doesn't seem to mind running on the highway at 65. I've been driving it back and forth on highway 17 between Santa Cruz and Silicon Valley with confidence. I taught my 19-year-old daughter to drive stick this summer, and she used it as a daily driver to-and-from work and around town while she was home from college. It's had various recent repairs -- brakes, radiator, water pump, etc -- and is in reasonable working order. No smog-check needed in CA. I love this little truck, but I commute by bike now and so I'm letting it go.
This model was featured in popular mechanics as one of "5 Top Retro Eco-Supercars" (Oct. 2008).
Features:It starts, it runs, it drives, and it stops when you hit the brakes. Headlights work (low beam and high beams). All turn signals work. Brake lights work. Hazard lights work. Fuzzy Dash-mat cover the ugly, cracked original dashboard. Horn works with a really cool "honk" sound. Aftermarket CD player/radio works just fine, and there's an aux input jack. All windows are intact. Block heater for cold winter nights (it started fine at -10F in Minnesota). Camper top. Passenger seat so you can take a friend with you.
Some quirks, things you should know, and things that aren't quite right:(This is probably not a comprehensive list -- but I want a happy buyer so I'm disclosing everything I can think of).Fuel gauge doesn't work -- probably the sender. I usually refill after about 400 miles.Dashboard is quite badly cracked from sun damage. (But there's a nice dash-mat covering it up.)Speakers are tiny, original, and pretty blown out.Various owners have probably done some amateur repairs, so a few things might be connected up weirdly under the hood & dash.Air conditioner is totally disconnected and I don't know if it's recoverable. (Don't try to turn on the AC -- occasionally smoke comes out from under the dash if you do.)Missing timing belt cover.I don't think the choke works.I suspect the head gasket is slightly thicker than spec (replaced 4 years ago) -- so it might not be running at optimal efficiency/performance because of this.The original head had mechanical lifters; new head has hydraulics.The truck is sort of noisy, even for a feisty little old diesel. Perhaps that's just its personality. And there's not a lot of sound insulation.Driver side external lock needs to be turned gently when locking, or the mechanism jams and has to be unjammed.No power steering on this model, so it takes some effort to steer around tight turns. It probably drips a little bit of oil.Seats are worn and have some tears. (Seat covers hide this).Reverse lights aren't working. I suspect this is from the old connector behind the left taillight unit, but haven't confirmed.License plate lights needs new bulbs, which I haven't been able to find.There's a rust hole in front of the left rear wheel well. Various wires and such hang a little low below the dash.Inside the bed, an ugly rust patch below the window to the left.The little camper top is sort of old and not sealed to the cab right now (so water might come into the truck bed if it rains). The locks on the topper don't work. The rear camper door seal is loose.A little hail damage on the left front door and hood.The hood latch mechanism works fine but you need to close the hood gently.Sun damage to the paint on top of the cab and possibly a few other places. Paint is original.Windshield wipers are old-ish.Headliner is missing and there's some surface rust on the ceiling of the cab.The "time to shift now" and "glow plugs hot enough" lights don't come on.I got gently rear-ended once around 6 years ago (the other driver was going about 5mph), bending the left side of the bed slightly. A body shop pulled it straight and I haven't noticed any issues since then.The passenger side window crank requires some muscle.Carpet isn't glued/clamped down around the edgesVent ducts aren't all hooked up right -- heater/fan only blows on windshield.The clutch/gearbox/shifter are old and take a little time to learn. Clutch action is high up.Various dents, scraps, scratched parts, etc.Only one set of keys.
It's a pretty, nice, solid truck, and if taken care of, it should have a lot of years left in it. 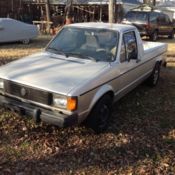 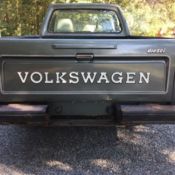 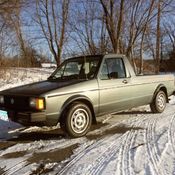 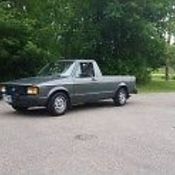 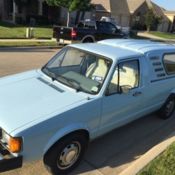 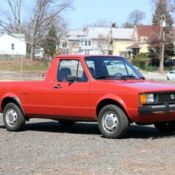 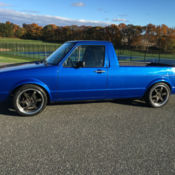 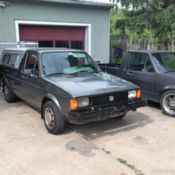 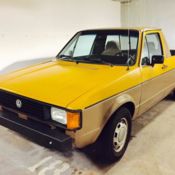 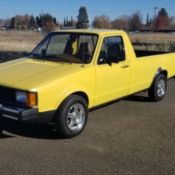