This is the sweet ready to cruise Westy you have been looking for. Go anywhere!

The engine conversion was installed by Northwest Connecting Rod,a custom VW shop near Seattle, WA that has been doing engine conversions andinstallations for over 20 years. They installed a VW turbo diesel 1.9L AAZ engine from a Jetta with 40k miles. The installation includes custom engine mounts, and custom intake and exhaust to fit the Westy. At the same time they installed a new high-torque diesel starter and a newly rebuilt Bosch alternator. The transmission was professionally rebuilt and they installed a new clutch. To convert the engine to a veggie burner (capable of running on biodiesel grease fuel as well as standard diesel in the same tank) they installed an ANC - Elsbett greaseEnergy kit. This kit includes custom injectors and two separate fuel preheating systems. It is a truly versatile and bio- friendly engine and yes, it smells like popcorn from the exhaust when you are burning biodiesel. You can run it off diesel, biodiesel, or a mixture of the two.

All windows were removed prior to body workand all rust and dents (minor to begin with) were removed. Professionally painted, including door jams. Professionally Rhino-sealed on bottom for ultimate protection and two-tone look. New GoWesty bumpers. All window seals werereplaced with new GoWesty seals. All the locks are keyed the same.

The ambitious and earth-conscious driver could easily set up their own homemade biodiesel refining station in their garage and run the car for free using recycled fry oil from local restaurants.

With the installed solar panel and auxiliary battery kit you can live off grid as long as you want!

It's the nicest Veggie Burner Camping and touring Westy in the US. 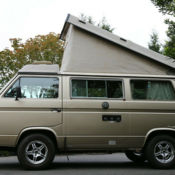 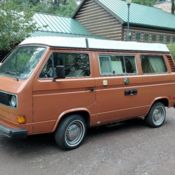 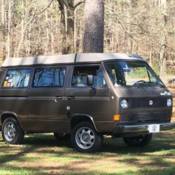 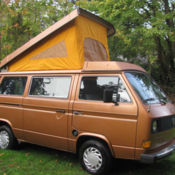 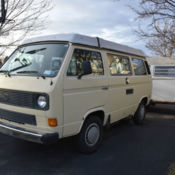 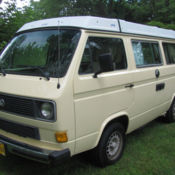 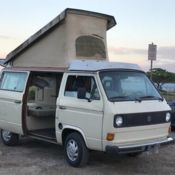 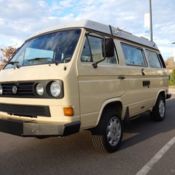 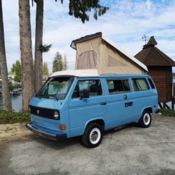 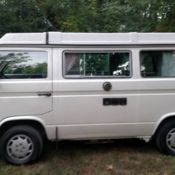