For the true British sports car experience, it's hard to beat a TR6. Stuffing a big inline-six cylinder under the hood does wonders for performance, and it makes lovely sounds out on the open road. At the same time, the TR6 retains that old world charm that even the Miata wasn't able to duplicate despite years of scientific research. No, there's just something special about British craftsmanship and a car with a real wood dashboard. This 1976 Triumph TR6 has... been restored all out of proportion to its value. Someone spent quite a bit more than the asking price to make it look this good, but given the way these have been slowly inching up, perhaps the investment was warranted. The dark blue exterior is handsome and conservative, and looks the way a sporting two-seater should with handsome cut-down doors, a long bonnet, and that trademark upright windshield. The sheetmetal is in excellent condition, clean and straight and wearing a nothing beyond what the factory intended. The paint has a gloss that seems right for a vintage British roadster and you can see the quality throughout as the door jambs and inner fenders are just as nice as the bodywork. Other details like the early-style chrome bumpers, correct Union Jack emblems on the quarters, and the instantly-recognizable taillights are in great shape. Most TR6s received basic black interiors, but we think the gray upholstery in this one gives it a very upscale and modern look. The patterns are correct and the lighter color will certainly make it more comfortable for top-down motoring. Add in the drop-dead gorgeous walnut dashboard that's been refinished well beyond the factory standard, plus a set of handsome Smiths white-on-black instruments, and this car starts to look like it's worth every penny of the asking price. There is an original AM/FM radio, but we suspect that you'll enjoy the soundtrack of the brawny six-cylinder engine even more than music. All the gauges are working, the carpet isn't faded, and there's a bit of storage behind the seats that supplements the modest trunk out back. British roadsters were never famous for their foul weather capabilities, but this car offers a new black vinyl folding top with distinctive three-element rear window that's a TR6 hallmark, as well as a nicely finished trunk that's got decent storage space. You can follow the blue paint under the hood, where you'll be delighted to see a neatly trimmed engine bay. The big 2.5 liter inline-six is smartly dressed with a finned valve cover and a pair of side-draft carburetors, all surrounded by that beautiful blue paint that makes a fine backdrop. It fires easily and idles properly, and out on the open road, you'll be tempted to run it up to redline in every single gear just to hear the muscular six sing its baritone song. The carbs have been properly tuned and synchronized, delivering a smooth flow of power with no stumbling or flat spots, and the 4-speed gearbox has an overdrive unit, so this is a fantastic high-speed sports car. Lots of new gear underneath, including fresh shocks and a true dual exhaust system, plus zero rust and a new exhaust system, means you can own this TR6 with confidence. Period-correct Minilite wheels are an awesome choice, and they carry right-sized 205/70/15 Michelin radials. Complete with build receipts and manuals, this is by far the finest TR6 we've ever featured. And where else can you get a six-cylinder 2-seat British roadster for the price of a used Honda? Call today! 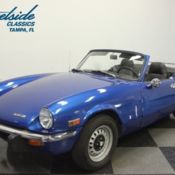 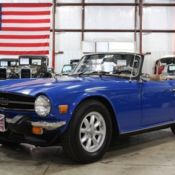 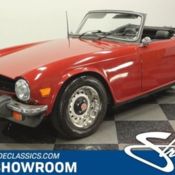 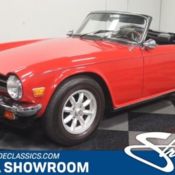 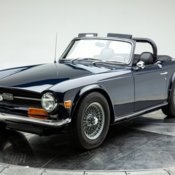 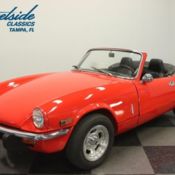 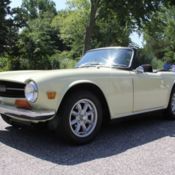 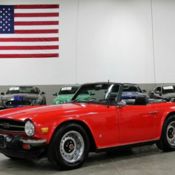 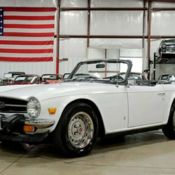 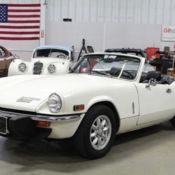