As I'm getting older and my kids have left the nest my plan is to drive something unique and different every 3-6 months. I purchased this car from Motoexotica on 1/8/18 and I've been driving and enjoying this car since it was delivered. I started to make a few changes and as chance would have it found something else that interests me. Below is the description that was listed when I purchased the car. Ireplaced the Carburetor with a brand new one, changed the spark plugs and wires. I have a new HEI cap and coil that comes with the car. I've added some of my photo's as well. There is also a really well made video on youtube posted by Motoexoticahttps://www.youtube.com/watch?v=lfdNeUIAPrM.

The car is currently registered and insured. It has a clear NYS title.

What I have found that you should know is the casting numbers listed on a buick website show this to be a 1979 231 V6 odd fire engine. Thewiring could be better organized and like all older engines weeps a bit of oil; also commonly referred toas the English Rust Proofing system.

·Exterior paint and pinstripe are original

What a combination – Italian styling, English coachwork and an American engine. MotoeXotica Classic Cars is pleased to present this 1973 Triumph Staff Convertible Mark II. Only 2,871 Stags were exported to the United States between 1970 and 1977. This example was bought new in June 1973 and we purchased this Triumph right here in Missouri from the original owner who purchased the Stag new from Bill Reaves Motor Sales in Springfield Missouri. The original owner stated that the 72,118 miles is original and the original window sticker is also included!

Finished in Carmine Red (code 82), this droptop’s paint and trim are in overall very good order but there are some minor blemishes visible upon close inspection but the paint is still original in exception of the hardtop which was resprayed some time ago. The car’s glass is in similar condition, clear and intact and the hardtop features a rear window defroster. The vehicle lights are in overall good shape.

This Stag rolls on Michelin tires, size 185R14 at all four corners, surrounding the original and correct cast alloy wheels. The car’s bodywork is straight and solid, including the hardtop. The trunk has a full-size spare tire and is very tidy, as is the engine bay; the battery looks good and the bumpers fit well to the car’s body. All Stags were four-seaterconvertiblecoupes but for structural rigidity– and to meet 1970s American rollover standards – the Stag required aB-pillar“roll bar” hoop connected to the windscreen frame by a T-bar.

Under the forward-hinged hood is an old American friend, recognizable if you’re at least 45 years old. Replacing the car’s known problematic original 3.0L V-8 engine in this car is a Buick 231 CID V-6 from the 1970s GM X-body compacts; it was added in 1977 and is buttoned to a four-speed manual transmission. Driver convenience features include power brakes, power rack-and-pinion steering and power windows. Other new or replaced parts include a new steering rack on March 3, 2015, a replacement transmission in 2010, new sun visors and seat belts, a new soft-top and there’s a toggle switch under the left side of the dash to activate the radiator fans.

Inside, the tan (code 43) front bucket and rear bench seats are in very good condition with just a few tears on the bucket seats. The original tan carpeting is in fair shape while the hardtop’s neutral-colored headliner is in good order. The cloth soft top is in very good shape and appears to be original but the rear plastic window is cracked and faded. The instrument panel, with its full array of gauges, is in one piece and features woodgrain panels for added warmth. There’s a similar panel surrounding the gear shifter. The original three-spoke steering wheel is present and in good condition, while the inner door panels are in just fair condition. The mirror glass, center console and shift lever all look good and a Kenwood AM/FM stereo with cassette deck rounds out the interior.

Envisioned as a luxurysports car, the Triumph Stag was designed to compete directly with theMercedes-Benz SLclass models. A removablehardtopwas a popular factory option for the early Stags and was later made standard.

The initial Stag design was based around the saloon’s 2.5L six-cylinder engine but Harry Webster intended the Stag, large saloons and estate cars to use a new Triumph-designedoverhead cam(OHC) 2.5Lfuel injected V-8. Under the direction of Webster’s successor,Spen Kingin 1968, the 2.5L millwas enlarged to 3.0L to increase torque. To meet US emission standards, a key target market, the troublesome mechanical fuel injection was dropped in favor of dual Zenith-Stromberg 175 CDSE carburetors. In common with several other manufacturers, notably Vauxhall and Lotus, a key aim of Triumph’s engineering strategy at the time was to create a family of in-line and V-engines of different size around a common crankshaft. The various configurations possible would enable the production of four-, six- and eight-cylinder power plants of capacity between 1.5 and 4 liters, sharing many parts and hence offering economies of manufacturing scale and of mechanic training. A number of iterations of Triumph’s design went into production, notably a slant four-cylinder engine used in the later Triumph Dolomite and Triumph TR7, and a variant manufactured by StanPart that was initially used in theSaab 99. The Stag’s V-8 was the first of these engines to be fitted to a production car. Sometimes described as two four-cylinder engines Siamesed together, it is more strictly correct to say that the later four-cylinder versions were the left half of a Stag engine.

Other than the choice of transmissions, there were very few factory-installed options. On early cars, buyers could choose to have the car fitted with just the soft-top, just the hard-top (with the hood stowage compartment empty), or with both. Later cars were supplied with both roofs. Three wheel styles were offered. The standard fitment was steel wheels withRostyle“tin-plate” trims. The wheels are secured with the usual four bolts, but the Rostyle trims have five false bolts. Five-spoke alloy wheels were an option, as were a set of traditional steel spoke wheels with “knock-off”‘hubcaps. The latter were more commonly found on Stags sold in North America on Federal specification vehicles.

If you seek a classic grand tourer from the UK with an American heart to add to your collection or if you’re wanting to buy something different, a way to ensure you won’t see yourself at a local cruise night or car show, visit our showroom today!

This car is currently located at our facility in St. Louis, Missouri. Current mileage on the odometer shows 72,118 miles and believed to be original. It is sold as is, where is, on a clean and clear, mileage exempt title.GET OUT AND DRIVE!!! 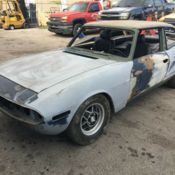 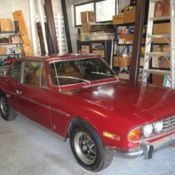 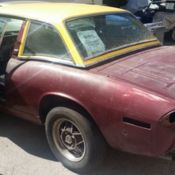 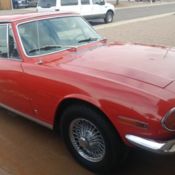 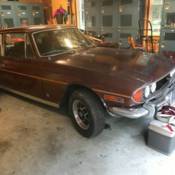 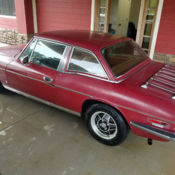 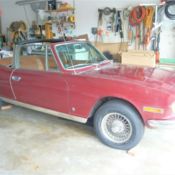 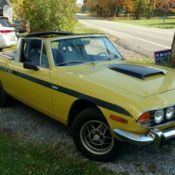 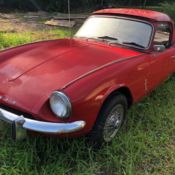 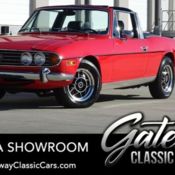