1974 Toyota Land Cruiser FJ-55 4x4 SUVâ€¢ One of only 8,204 FJ-55s exported to North America in 1974â€¢ Southwestern truckâ€¢ Recent professionally frame-on restorationâ€¢ Rebuilt 3.9L straight six-cylinder engine (code F); final model year for this engine â€¢ Four-speed manual transmission and dual-range four-wheel driveâ€¢ Cappuccino Beige over Oxford White exteriorâ€¢ New brown vinyl upholstery with Copenhagen cloth inserts, new carpet and headlinerâ€¢ Power brakes â€¢ 106-inch wheelbase, 98-cubic-feet of storage space and 23.8-gallon fuel tank â€¢ Rear window drops into tailgate, padded dashboardEnjoy the thought of vintage off-roading but you donâ€™t want to leave your kids, grandkids or friends behind? MotoeXotica Classic Cars may have your solution in this Toyota FJ-55 4x4 SUV. This US market example has been professionally restored and was one of only 8,204 examples exported to North America in 1974. The FJ55 entered production in 1967 and was produced in Toyota City, Japan. It featured novel advancements like a fully boxed frame, and a tailgate-only configuration with an electrically operated window that retracts into the tailgateâ€”a feature that the 4Runner line carries to this day. The FJ55 retained the FJ40â€™s driveline, but effectively replaced the four door FJ45V. Internally it was known as the â€œMooseâ€ but picked up the much more dashing, â€œIron Pigâ€ due to its unique styling at the time. Between the Toyota FJ-40 and the more modern FJs is the missing vehicle link called the FJ-55. This model tends to be much more rare among the hierarchy of Toyotaâ€™s off-road vehicles. It was designed to be family friendly with full 4x4 capabilities and ruggedness. Dressed in Cappuccino Beige over Oxford White exterior, the SUVâ€™s paint and trim are in overall excellent condition. The bodywork is straight and solid, the engine bay is extremely tidy, the battery appears new and the black front and rear bumpers look good, too. The rear window can retract into the tailgate.This Cruiser is shod with BFGoodrich All-Terrain T/A Baja Champion light truck tires, size 31x10.50R15 at every corner. Each tire is mounted on a white alloy wheel; there are front-locking hubs. The wheels are in very good order, as are the tires. The Cruiser rides on a 106-inch wheelbase and has a 23.8-gallon fuel tank.Under the hood is Toyotaâ€™s venerable 3.9L inline six-cylinder engine (code F), dressed in black that the previous owner stated that it was recently rebuilt. The F engine block, crankshaft and lower end assembly is loosely based on the 1939-63 GMC 235 CID straight six-cylinder engine but with a taller deck (rather than the similar but smaller Chevrolet 1937-63 second-generation OHV inline six-cylinder engine) and built under license. The cylinder head and combustion chamber are derived from the Chevroletâ€™s inline six-cylinder OHV â€œStoveboltâ€ engine, slightly scaled up. The general idea was consumers would feel comfortable with the engine since it was a familiar design and had a proven track record. None of the bottom end of the engine is interchangeable with these engines. In September 1973, the F engine was updated, to a model sometimes referred to as â€œF and a halfâ€ or F.5. The major difference between the F and the F.5 is the oiling system; the F.5 uses the same oiling set-up and configuration as its 2F successor. Backing this motor is a four-speed manual transmission and a two-speed transfer case. Driver convenience features include power brakes.Inside are new upholstery and new carpeting. The front buckets, center pad and rear bench seat are all done in original 1974-style brown vinyl with Copenhagen cloth inserts. The rear bench folds down for extra cargo capacity, 98-cubic-feet. Thereâ€™s a three-speed steering wheel, a padded dash with full instrumentation and inner door panels to echo the rest of the interior but the horn is inoperable. Floor-mounted gear shift and range shift levers complete the interior. The Land Cruiser 55 was produced from 1967 to 1980. Toyota refers to the FJ55G and FJ55V as the first â€œrealâ€ station wagon in the Land Cruiser series, thus marking the beginning of the station wagon bodystyle. It was the first Land Cruiser to have fully enclosed box frame members. Of all the Land Cruiser wagons sold in the U.S., including the FJ45, it is the only one to not have hatch and tailgate in the rear, but rather a tailgate only with an electrically operated window that can be retracted into the tailgate. The FJ55 was a four-door station wagon version based on the FJ40's Drive-train, replacing the 4-Door FJ45V. It was colloquially known as the â€œMoose.â€ It has also been referred to as the â€œiron pig.â€ The FJ55 was mainly designed to be sold in North America and Australia which has made it very collectable today. Competition to this FJ-55 in 1974 included Chevroletâ€™s Suburban, GMCâ€™s Suburban, International Harvesterâ€™s Scout II, Jeepâ€™s Grand Wagoneer and in overseas markets, the Nissan Patrol.VIN: FJ5540888This truck is currently located at our facility in St. Louis, Missouri. Current mileage on the odometer shows 63,105 miles. It is sold as is, where is, on a clean and clear, mileage exempt Arizona title.GET OUT AND DRIVE!!!â€¨Note: Please see full terms and conditions listed below that pertain to the purchase of any said vehicle, thank you. 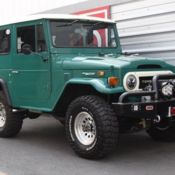 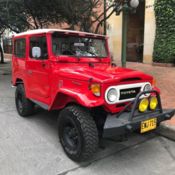 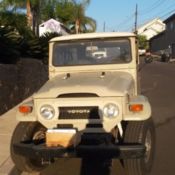 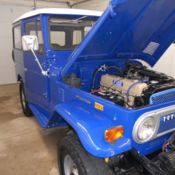 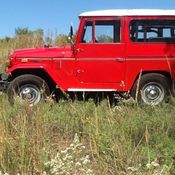 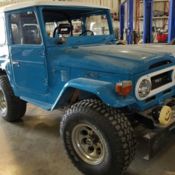 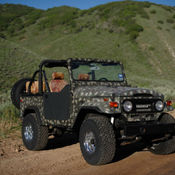 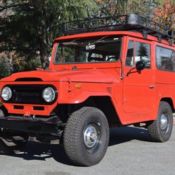 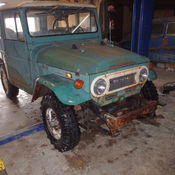 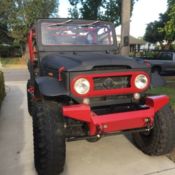