This 1982 Toyota Land cruiser HJ47 diesel troop-carrier is the result of a 10-year search though Asia, Australia and South America. The troop-carrier or “Troopy” was never sold in the United States so I had to look overseas to find one. The reason my search took so long was I wanted an unrestored 2H diesel Troopy with as much original paint as possible and no rust-holes or bondo repairs.

Growing up in Southeast Asia I have fond memories of the diesel Land cruisers that where able to go anywhere. In my opinion, the best looking land cruisers where the “Troopys” as they had a tough military look and where designed to carry up to 11-soldiers and gear.

The Troopys I found in Asia where severely rusted-out from all the rain and humid weather. The Troopys in Africa where beat-to-heck with lots of non-original modifications and the Troopys from South America where often used as farm vehicles with less then optimal maintenance.

This Troopy was originally delivered to Australia and was lightly used as a safari guide vehicle in the outback (It still had the red outback dust when I bought it) and far away from the salty coasts so it did not have any rust-through holes.

Because of the numerous kangaroo’s in the outback this Troopy was fitted with a “Roo-Bar” to protect the front end. Most Roo-Bars are ugly, handmade and metal. This Roo-Bar is heavy-duty aluminum (made by a Aluminum fabricator) and then powder-coated. This Roo-Bar is quite strong as I pushed a 26’ Uhaul truck off the freeway after it had broken down. The bar would probably do a good job of protecting the front-end in a collision.

This Troopy is a right hand drive and takes about 15-minutes to get used too. I was concerned at first, having never driven a right-hand-drive vehicle but now really enjoy the different driving experience. The engine cruises nicely at 75mph (due to the taller tires) but just purrs at 62mph and could run for days at that speed. On one trip, I drove 1,650 miles in 30 hours though desert heat and mountain snow and it ran flawless. The engine starts on the first try, every time… even in cold weather and has never let me down or had a mechanical issue.

This Troopy came from the factory with the last version of the 2H engine which is know as the best diesel engine Toyota made for the Land Cruiser and they are known to easily go 1,000,000 km (620,000 miles) and more before needing a rebuild. If you zoom-in on the dash photo you can see the odometer reads 322,142 km, converted to miles thats 200,168. Because this engine has been well cared for it most likely has over 2/3's of its engine life left before needing a rebuild.

This land cruiser has (2) OF EVERY CRITICAL COMPONENTto ensure unmatched range and reliability.

(2) FULL SIZE SPARE TIRES All the wheels including the two spares are new Factory Toyota FJ Cruiser steel wheels. Steel wheels are slightly heavier but less likely to crack when off-roading and easier to repair then aluminum wheels.

(2) BATTERIES I went with two Optima “BlueTop” batteries. They cost more then the Red or Yellow top because they are deep cycle and can sit for the longest periods of time without charging and are designed for the harshest conditions. I only connected one battery and use the second battery as a backup. I installed an industrial quick-connection that allows both batteries to be used together if heavy electrical needs are required. Either configuration (one or two batteries) the system stays at the factory 12 volts.

(2) FUEL TANKS The factory gas tank is 18-gallons and the second safari tank is 20-gallons, so 38 gallons total. I average 22-mpg on the highway so this Troopy has a range of over 800 miles without stopping. A switch on the dashboard transfers fuel from the safari tank to the main tank while driving, so no need to stop.

(2) FUEL FILTERS Most diesel engines are very reliable and Toyota’s 2H 6-cylinder diesel engine is the gold standard in a Land cruiser. All diesel engines can have problems if moisture gets into the fuel. I never had a problem with this, but for safety I installed a second screw-on commercial-grade fuel filter with a separator-drain and fuel passes through this filter before passing through the factory fuel filter.

(2) OIL FILTERS Both come standard with all 2H diesel engines. The oil flows through a centrifugal mechanical filter that removes any large debris then flows through a typical screw-on disposable filter.

After years of enjoying this Troopy, I still have not found a better unrestored example. I have see a few restored troopys that where done very well and cosmetically better-then-new, but they where no longer original with gas V-8 engines, heavy spray-on-liner and lots of sheet metal repair.

I’ve also seen the quicky restorations where they spray paint over everything. Rust holes are filled with bondo and just sprayed over. The entire engine bays are spray-painted black… hoses, belts, wires, everything. Because I saw first-hand how most Troopys where used as non-stop work horses with all kinds of mods and heavy rust I was concerned about what would be hiding under a restoration.

I decided that a restored troopy would likely be hiding lots of rust and repairs but would also be too perfect to enjoy off-road. I also noticed a trend in collectibles, especially vintage off-road where unrestored original vehicles tend to hold their value.

In addition to being as original as possible, I wanted a troopy that wasn’t missing lots of standard equipment. This Land Cruiser has the following factory equipment that I have never seen in any other troop-carrier.

I know this Land Cruiser will do what it was designed to do and know it will preform in any environment as I have driven it through almost every driving condition. Some of the following include:

After every adventure this Land Cruiser was completely and meticulously cleaned, including the engine bay and undercarriage. I never let any dirt or road-salt stay on the vehicle for long. I always garaged this Land Cruiser and batteries are maintained on dual quick-connect battery-tenders and parked on nylon tiles. (for longer tire life)

This Troopy has some upgrades that where done for safety, convenience and range. All upgrades are either “period correct” or OEM Toyota parts.

All of the interior paint, including the floors, walls, dash and engine bay are all original paint. The exterior was repainted in the original color in 1998 (No bondo or rust-hole repair) and because this Land Cruiser was well cared for, the paint still looks great today.

·While there where no rust holes when I purchased this Land Cruiser, there was some minor surface rust around all the door hinges. There was also heavy scratches on the exterior front door footsteps and rear door base. All the hinges where removed along with the foot steps and taken down to bare metal then primered and painted. We where able to use the factory paint code and it matched perfectly. We also touched up rock chips on the front facing paintwork. I saved a large bottle of factory paint that will be included. I took pictures of the paint process for reference.

·I was told rust likes to build up between the roof gasket and body so I removed the roof to check. There were a few minor surface-rust-spots so we took those spots down to metal and primered and painted (I took pics for reference) Since we had the roof off I decided to paint it and install a new factory headliner.

· I touched-up parts of the undercarriage with a thin flat-black rust converter. I only sprayed areas that showed slight surface rust to stop it. I have seen people spray paint the entire undercarriage in heavy black paint to hide years of neglect or abuse and I did not want to hide anything. The undercarriage is not perfect, but its honest and the most original I have seen.

ORIGINALPARTS ARE EASY TO FIND FROM:

SPARES KIT included WITH THE SALE:

All of the spare and service parts come in a blackcanvas bag and should cover your service needs for quite some time.


As a longtime enthusiast, I have noticed that perfectly restored Land Cruisers are seldom if ever used as intended. I have also seen“just-restored” Land Cruisers that still take hundreds of miles to sort-out all the mechanical issues before they are reliable enough to go on a road trip, much less off-roading. This Land Cruiser is sorted and ready for any trip or weather.

On the flip side, I have seen “fixer” Land Cruisers that take years to repair and end up costing so much time and money by the time they are finished the owner wants nothing to do with them.

I have become a fan of Land Cruisers that are properly used and maintained, but still original aspossible, as I feel they offer the most enjoyment and best appreciation potential.

This Land Cruiser Troopy has never been restored and isn’t cosmetically perfect and I like it that way. That said, I have yet to find another one this original, complete and unmolested. Everything works, from the window-washer-sprayer to the mechanical 4X4 cruise control.

This Land Cruiser needs nothing (not even an oil change) and is ready to cross any continent or just look awesome in your garage.

The vehicleregistration is current with a clear Nevada tile and can be registered in any state as it is past the 30-year threshold for smog and has a dieselengine.Ebay's system does not allow thefactory 10-digit VIN, actual VIN isHJ47-017394. Please call me if you have any questions. Dan (818) 207-3604

I have many morephotos, however this is really a vehicle you need to see in person to appreciate. I have 100%positive feedback because if you are the high bidder and win the auction and don't like this Land Cruiser for any reason after you inspect it then you do not have to buy it... its that simple. 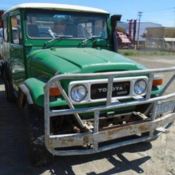 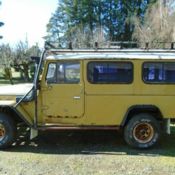 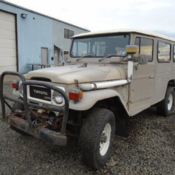 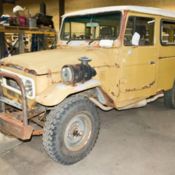 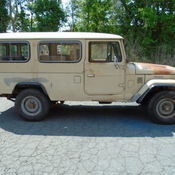 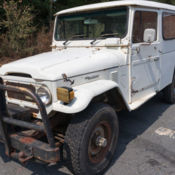 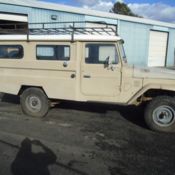 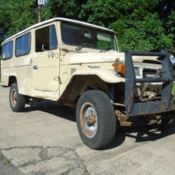 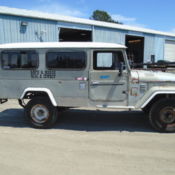 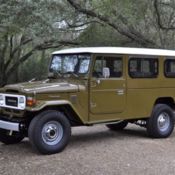