Being a coveted street machine created by one of the most respected names in its niche would be plenty on its own, but the appeal of this 1965 Shelby Cobra Factory Five doesn't stop there. This thoroughly well-built classic combines stellar curb appeal with outstanding power in the form of a fortified and fuel injected powerplant that anchors a world-beater of a drivetrain. There's quite a collection of top tier components on board, with plenty of build receipts included to... document the expense that's gone into bringing this car to its current awesome state. As component cars, Shelby replicas like this one rise and fall on the quality of their manufacturers' process and parts. Exacting tolerances, precise engineering and top tier materials go a long way towards creating a car that not only looks great but carries the visual impact and performance abilities the Cobra name is synonymous with. Being the handiwork of Factory Five, a respected manufacturer with more than two decades under their belt and known for their cutting edge, CNC-based processes, this car is an exceedingly capable representative of its niche. The well-fitted appearance you see here is the tangible result of all that precision. The color scheme, featuring a white backdrop accented with blue stripes over the hood and deck lid, is a nice fit for this classic and it also provides a subtle call out to the model's distant Mustang relative. The paint's in good shape, with an even shine and sharp edges on the stripes - a thorough detailing will elevate it even further. Fresh headlight housings, clean chrome on the front and rear bumpers and roll bars behind both seats complete its quality look. The black cloth interior features all the trappings of a driving environment that puts thrill-inducing performance on the front burner. The pair of Kirkey racing buckets feature maximum bolstering for support during ultra-spirited driving and the compact Moma steering wheel ensures that turns are negotiated with as little movement as possible. The short-stemmed shifter sits within very easy reach on the transmission tunnel and there's a full array of Factory Five gauges mounted on the dash, all of which work without issue, to monitor engine functions. Below, the carpet is in great shape and punctuated with a pair of its manufacturer's branded floormats. In a niche where combining unusually light curb weight and abundant power is a big part of the appeal, this '65 is an absolute standout. The 427 engine beneath its hood mirrors the displacement of its big block vintage counterpart and has been enhanced with a pair of Ford Performance Z2 aluminum heads and an MSD Atomic fuel injection system, resulting in factory readings well in excess of 500 horsepower. The engine pairs with a 5-speed manual Tremec TKO600 transmissions - one of the only transmissions that can rightfully be expected to handle such an output with no issues - and the drivetrain is rounded out by a 4.10 Traction Lock rear end that provides outstanding off the line acceleration while also ensuring that all available power gets to the pavement as efficiently as possible. Power steering makes navigation easy, while tubular control arms and coilovers in front combine with the multilink suspension in back to optimize agility. There's also disc brakes with sizable rotors at both ends, so you'll have plenty of fade resistant stopping ability at your disposal as this monster performer scorches the asphalt on its set of 17" knock-off style wheels wrapped with Ecsta XS tires. Looking to put a well-fortified open-air rocket with unbeatable curb appeal in your garage? Check out this 1965 Shelby Cobra Factory Five. Call today! 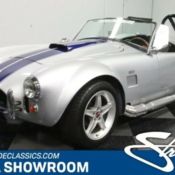 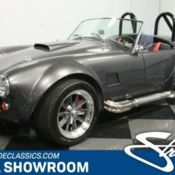 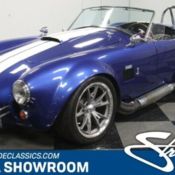 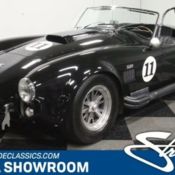 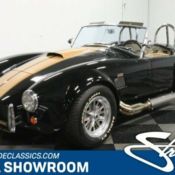 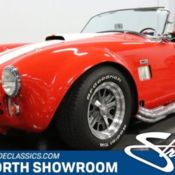 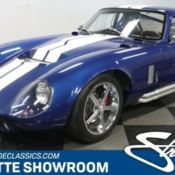 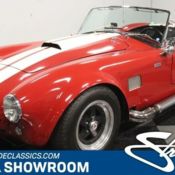 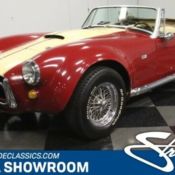 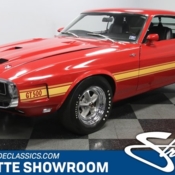