1967 Restored Shelby GT350 or OWN A REAL UPGRADED DRIVER

Have you dreamed of an Eleanor or 1967 Shelby tribute with all the latest-greatest running gear & suspension? Imagine that car created from an authentic, Concours condition 1967 Shelby, rather than an old questionable Mustang shell? Bragging rights, intrinsic value, exclusivity, collectability, reliability, and performance all embed themselves in this best of both worlds restomod concept. We can simply upgrade our authentic 1967 Shelby Mustang with clean bolt in items such as a Ford Performance 427 crate motor mounted to a 5-speed Tremec, along with independent suspension...whatever you envision your dream car to be, we can create. Store the original matching numbers K-Code motor and other factory items for a later date, and simply reinstall when original Shelby Mustangs shoot to the moon in value. What you'll have is an actual 1967 Shelby GT350 with Carroll Shelby's signature on the glove box, along with Shelby documentation establishing it's rarity and authenticity...that drives with modern comfort and performance. This 1967 Shelby was fitted with the extremely rare option of factory in dash air conditioning that can be updated but still keep the stunning classic look of the 1967 Shelby interior. Call or email to explore your options.

This 1967 Shelby GT 350, #1210 is 1 of 5 according to the Marti Auto Works report. Rare options such as special order color, air-conditioning and automatic transmission separate this fully optioned Shelby from all but four of the other 1967 Shelby's produced. The matching numbers original K code motor and a nut bolt concours restoration make this car a turn- key blue chip investment that needs nothing more than a new proud owner. This highly documented and verified 1967 Shelby GT 350 drives like a dream and comes with all the original Ford and Shelby documents supplied by the 1967 Shelby registrar, as well as the Marti Auto Works verification report. A color copy of the original 1967 Martin Senour paint chart is also included, and is an important reference for #1210's interesting paint color history. This GT 350 is listed in the SAAC Shelby Registry, and is currently registered in California with California black plates and a 1967 sticker. Of course there's a Carroll Shelby signature on the glove box.
Provided with sale is a copy of the original invoice from Shelby American to Johnny Bolton Ford itemizing the following options:
Power Disc Brakes
Power Steering
Shoulder Harness
Fold-Down Rear Seat
Select-O-Matic Transmission
Radio
Air Conditioner-Selectaire
Tinted Windshield
4.0 Gallons of Gas $1.20

This Shelby was originally purchased by WHOO Radio in Orlando Florida and a photo taken in 1967 can be seen at: http://bigbilllove.com/WHOO_Orlando_Florida.html
"This is a great picture from the 'WHOO Beat' of two of our WHOO station vehicles: A Honda motorbike, and the 1967 Shelby Mustang GT 'Cruise Newser,' which was used for a lot of promotional activities. We even ran it at Central Florida Dragway a couple of times! This was one hot car that even had a roll bar and fire extinguisher in the driver's compartment. The Mustang was the hottest car in America in the 60s, and this was the hottest model of them all. The vehicles are parked in front of the WHOO studios and transmitter building on Silver Star Road. Notice the typical Florida architecture and foliage." Big Bill Love-WHOO Radio Orlando Florida 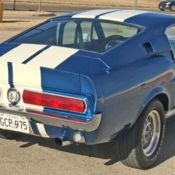 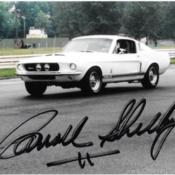 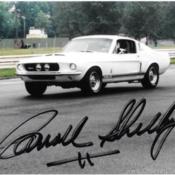 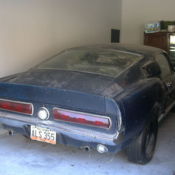 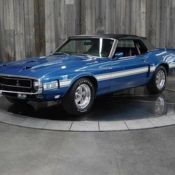 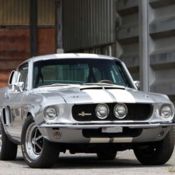 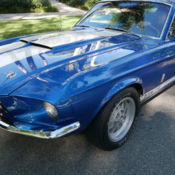 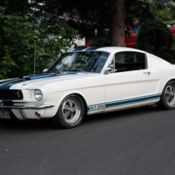 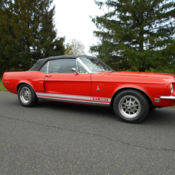 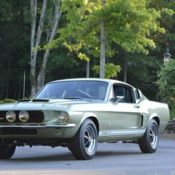