914 project needs good home. If you have some skills and some time, get a project you can drive while you work on it instead of a basket case! NO RESERVE - highest bidder gets it!
I bought this when my son was 13 thinking we could fix it up and he could drive it. Turns out we have neither the time nor the aptitude, plus his mother says his car needs airbags. We did get it running and driving, but he turned 15 and got his permit, and it doesn't look like we are going to finish any time soon so he bought a different car.
Bring a trailer! Tires are old - I would not advise traveling on them, but we take it into town occasionally (30 mile round trip). I never put new tires on because I had visions of doing a Can-Am tribute, and bought Mahle wheels (included in sale), and was planning on getting tires when we finished. Was registered and inspected in Texas until Jan 2018. I can't get the wipers to turn on, so I didn't register it this year. Local buyers welcome to come see it in person.
Comes with two keys, clean Texas title in my name. No owner's manual, but I've included several 914 books like the Haynes manual
Original color was Marathon Blue, but as it sits, it is several other colors, including primer. Mostly pearl white. Minimal rust, solid floorboards, hellhole. Hellhole may have been altered, as the DME does not look like factory mounting, but I don't have a different 914 to compare it to. Heat exchangers and HVAC system not installed, looks like most if not all the parts are there, maybe even some extras.
Tons of extra parts - the previous owner must have had two additional parts cars and picked them clean. Of note is complete engine (1.7L), transmission, Mahle wheels, heads, extra tops, steering wheels, etc.
Odometer read 34430 when I got it, but was broken. When I fixed it, the wheels slipped and now it reads 53355! But it works now. I'd have to assume it rolled over at some point.
I'd actually like to keep it, but I just bought another Porsche, and garage space is getting tight. Plus it does no good to let cars sit, I may as well let it go to someone who can give it the time it deserves.
Bought this from a father/son who were fixing it up until the son went to college. According to them "A little about the car: The suspension functions perfectly, with no worn bushings or rattles. The brakes are in great shape, and the factory rubber flex lines have been replaced with braided steel lines. The handbrake functions properly as well. The interior is original, except for a GT style firewall carpet, and an ABS dash cover. I would rate it as about a 6/10, because as seen in the photos, the drivers seat has fairly severe cracking on the bolsters.The transmission shifts perfectly, although it is a little vague. (all 914s are though) The clutch is brand new, and has fewer than 100 miles on it. It also has a brand new starter. The motor does have new fuel lines, vacuum lines, plugs, points, dist. cap, and condenser. The paint is obviously not great. it was involved in a fender bender that required the replacement of the drivers side rear quarter panel and tail light panel. However, the suspension is straight and the new panels fit well. Also included as a package deal are a ton of spare parts, such as a complete motor and transaxle, a bare engine case, a pair of heads, some extra heat exchangers, an extra crank, some misc interior parts, and a ton of spare parts for the efi and ignition. " 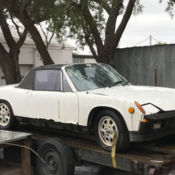 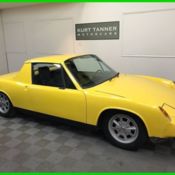 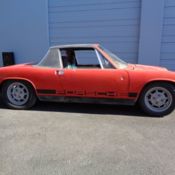 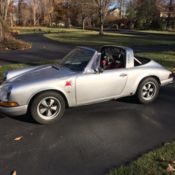 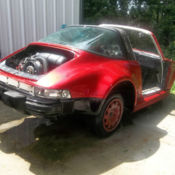 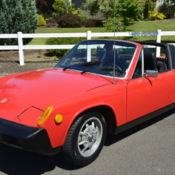 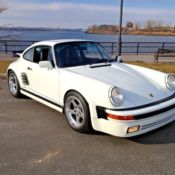 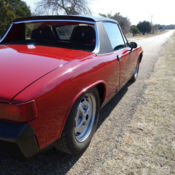 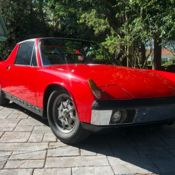 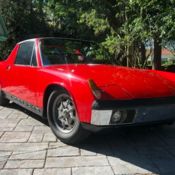