The 1976 Trans Am was a turning point for Pontiac. It proved in no uncertain terms that there was still a market for America's most versatile pony car. It was the first year for several styling cues that would stay with the car for the remainder of its life, and without this car, there would have been no Bandit just a few years later.Although the black cars would go on to fame and fortune, a lot of us prefer something more subtle such as this Sterling Silver T/A. Sure, it's still got all the tape stripes, decals, and screaming chickens that we've come to love, but at least it's not a rolling clich. We're pretty sure it has been repainted, it's just too nice to be original, and it certainly appears to have been expertly done. Panel fit is surprisingly good and the urethane nose cone and spoilers are in very good condition with very few of the issues that usually plague these models. The chrome accents are still there on the grille and headlight bezels, the black and red decals stand out against the silver paint, and all your favorite Trans Am components are still there, from the shaker hood (the last of the original design) to the ducktail spoiler. You've never seen a mid-70s Trans Am look so sleek.The red bucket seat interior will look familiar to any Trans Am fan, as the design didn't evolve much during the '70s. But what that really means is that they pretty much got it right. The seats are supportive, especially for the period, and workmanship was better than average giving it an upscale feel that the Mustang just couldn't touch. It appears that the interior is completely original, with just a bit of wear and age on the soft parts but nothing that needs replacing. The engine-turned dash was a Trans Am tradition and they're framed by a matching steering wheel with black spokes and a leather rim. Options include power windows, cold factory A/C, an AM radio with 8-track player, and a center console, making this one of the better outfitted Trans Ams we've seen recently. It shows about 47,000 miles on the odometer, and given the level of preservation on the paint and interior, we're inclined to believe it. Even the original space-saver spare is still in the trunk and it appears to have never been used. Pontiac's 400 cubic inch V8 was the standard engine in 1976, and that's one heck of a base powerplant. Making big torque, it moves the sporty coupe easily with great V8 noises coming from the distinctive split tailpipes out back. The engine bay has been beautifully maintained and nicely detailed, from the shaker hood scoop, to the Pontiac Turquoise paint on the block, to the accessories that all wear correct finishes. I mean, for an original car, it's really clean under the hood! A TH350 3-speed automatic transmission handles gearshifts, there's a recent Flowmaster exhaust system, and on the '76 Trans Am, those gorgeous honeycomb wheels were standard equipment. Today they wear 225/70/15 BFGoodrich T/A radials, which look right and fill the fenders perfectly.In the world of Trans Ams, this one is a relatively rare 'Bird, offering a dose of sophistication with its performance. Call today! 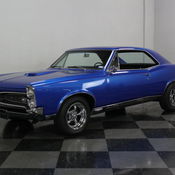 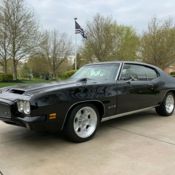 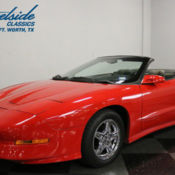 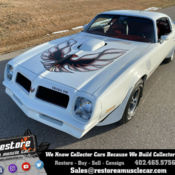 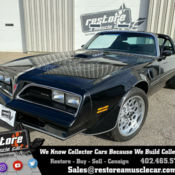 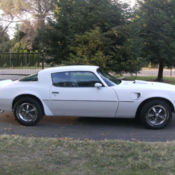 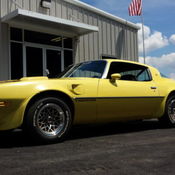 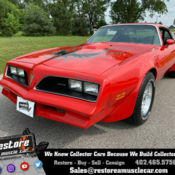 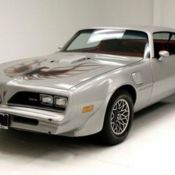 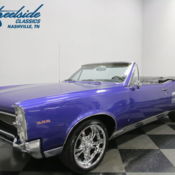