It seems many people are finally starting to realize something we predicted years ago: late model second generation Pontiac Trans Ams are the tri-five Chevrolets of the 1970s. At RK Motors Charlotte, we have been working very hard to find the BEST examples of F2 Trans Ams in existence and we've provided you with a whole slew of rare, super clean survivor 'birds that simply can't be beat. This largely-original, investment grade 10th Anniversary Trans Am Limited Edition is one of only 1,817 cars equipped with the LAST of Pontiac's W72 400 engines, and has driven only 3,072 miles in its 37 year existence.

Assembled at GM's Norwood, Ohio manufacturing facility in April of 1979, this rare, limited edition Trans Am was delivered to William J. Scerbo & Sons Pontiac of Parsippany, New Jersey. The car has been exceptionally maintained throughout its entire life, and has never been taken apart or received any major body repairs. Recently, it was repainted in a professional basecoat/clearcoat paint job that exactly duplicates GM's correct Platinum Poly and Dark Charcoal color scheme, providing a slick, factory-fresh appearance. Since this Pontiac has never been disassembled, it still displays factory-accurate panel gaps that look surprisingly good and provide great alignment. And a set of correct black and red outlining stripes, complete with anniversary-spec call-outs, perfectly complements dealer supplied Daytona 500 pace car side stickers and a menacing five color 'super bird' hood decal.

Not as 'loud' as the Gold Special Edition Trans Am, and not quite as menacing as the Black Special Edition Trans Am, this silver 10th Anniversary car combines typical Pontiac attitude with a refined look that was way ahead of its time. Up front, a slick and pliable urethane bumper centers four pristine headlights above dual grilles that, while still being instantly identifiable as Pontiac's familiar split grille look, give the car a much more aggressive face. Behind that bumper, a traditional shaker hood proudly displays "T/A 6.6", denoting the car's rare and optional W72 Pontiac engine, in front of original Soft Ray glass. Behind that glass, anniversary car-exclusive mirror tinted T-tops ride above chrome door handles and correct rear wheel air deflectors. On the front fenders, new black and red "Trans Am" call-outs are sandwiched between 10th Anniversary-exclusive screaming chicken decals and fender mounted air extractors. At the back of the car, more 10th Anniversary decals frame blacked out taillights and correct Firebird-exclusive side splitter exhaust tips.

Pop the car's hood and you'll find an original Pontiac W72 V8, which was actually left over from the 1978 model year when Pontiac had discontinued production of the engine. Thanks to government mandated emissions standards, performance had almost been legislated out of existence, and that left the Trans Am suffering a bit of an identity crisis. By utilizing smaller "6X" heads from a 350 and a revised camshaft, the W72 created higher compression and successfully reversed almost a decade of declining horsepower numbers. At the top of the motor, a correct 4-barrel carburetor rides under the car's awesome shaker scoop, while an original HEI distributor sends power to the cylinders through correct plug wires. Below that carb, original GM Corporate Blue paint floats between original exhaust manifolds that send exhaust in to a high performance factory exhaust system. All the hard parts around the motor, from the belt driven accessories to the brake booster and factory air conditioning, are as original, as are the decals and signature, satin-finish valve covers. The car's clean engine bay and hood are covered in a nice coat of GM Satin Black, and all belts and hoses appear to be in good working order.

Underneath this Trans Am, a solid 37-year-old undercarriage tells the story of excellent caretaking, with rock-solid floorpans that still display their factory undercoating, and a rear end that still maintains its factory chalk mark and maintenance tag. Behind the motor, you'll find a W72-exclusive 4-speed that sends power to the car's original 10-bolt rear end and a standard WS6 handling package. For 1979, the newly dubbed WS6 package included larger sway bars, better shocks and springs, a tighter steering gearbox and newly designed power front and rear disc brakes that, when combined with the car's standard power steering, made for serious handling ability and greatly reduced stopping distances. In the middle of the floors, an original dual exhaust system still carries original GM mufflers and catalytic converters in front of correct stainless tips. And power flows to the pavement through old school 235/70R15 Goodyear Polysteel Radials, which are mounted to new-for-'79, 10th Anniversary-exclusive 'turbo style' wheels.

Inside this Trans Am, an original anniversary car-exclusive Silver leather interior looks fantastic, showing hardly any signs of wear at all and, in our opinions, rivals the Ivory laden Chevelles of the late '60s and early '70s as one of GM's best efforts. The firm and comfortable seats are nice metallic silver pieces that have the liquid cool appearance of wet paint, and the Cadillac-supplied shag carpet looks great. Between those seats, a clean gray console founds chrome switches for the car's power windows behind a chrome Hurst shifter. Above those seats, a stain-free headliner is stretched tight around the car's mirrored tops and optional reading lamps. In front of the driver, an engine-turned dash hangs crystal clear gauges above a correct stereo and levers for the car's factory climate control. At the sides of that dash, awesome silver door panels feature bright, anniversary car-exclusive embroidery that perfectly matches an anniversary car-exclusive emblem in the center of the rear seat. Connecting the driver to the road is a correct aluminum steering wheel, which laps an optional, tilting column. And out back, the car's pristine trunk still has its original decals and carries the car's original Stowaway spare tire.

We've featured many of these 10th Anniversary Trans Ams in the past three years and, without exception, they've all sold very quickly. There's a devoted following who knows these are underrated cars, and pristine, mostly-original survivors are becoming exceptionally difficult to find. With its all-Pontiac motor, hot close-ratio 4-speed and 4-wheel disc brakes, this rare Trans Am is an excellent road car that has a tremendous potential upside! 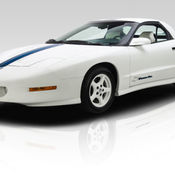 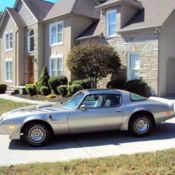 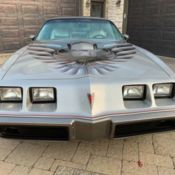 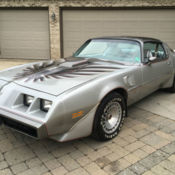 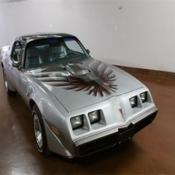 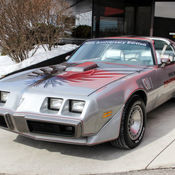 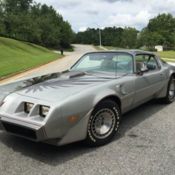 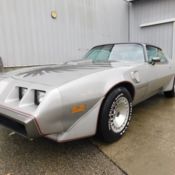 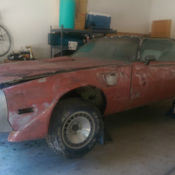 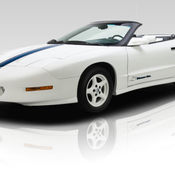