Spectacular rotisserie restoration with just 500 miles since completed. U-code 440 with Six Pack induction added. Factory bucket seat/console car, original color combination. Runs and drives beautifully!
Wearing a no-expense-spared restoration and just 500 test-and-tune miles, itâ€™s easily the finest example weâ€™ve ever featured. It carries all its original sheetmetal and has been refinished to a level thatâ€™s surely better than new. All the special Superbird parts are intactâ€”the nose cone is steel, not a fiberglass repro, the wing is aluminum, and the scoops on top of the fenders are plastic, just as it was when it was new. The paint is two-stage urethane thatâ€™s a lot deeper and shinier than the original enamel, and the black vinyl top that disguises the fiberglass rear window â€œplugâ€ is expertly fitted. Correct decals were installed as needed, along with correct hood pins and a bunch of fresh chrome. And before you complain about the fit of the nose cone, we note that the restorer was instructed to leave it as it was, not perfect it. This car is right.
This is also a factory P6XA black bucket seat car with a console, which elevates it above some of its siblings with standard bench seats. In truth, the stylish black and silver interior looks upscale even though it was designed to be basic, and on a car that can run like this one buckets are a smart choice. Everything is from Legendary, so itâ€™s right and beautifully done, and just about everything you can touch is new. All the interior courtesy lights brighten the interior when you open the door and the dash glows softly when you activate the headlights, which pop up reliably when you hit the switch. Fresh woodgrained appliques warm things up somewhat inside and this is a big car, so youâ€™ll find it comfortable for you and your family. The Road Runnerâ€™s trunk is largely the same, although the giant wing is tied into the subframe, so those brackets are tucked into the corners. Youâ€™ll note thereâ€™s a correct full-sized spare with the unique Superbird jack assembly, which is probably worth a substantial chunk of change by itself. This car is very nicely detailed throughout.
This is a U-code car, so the original engine was a 440 cubic inch V8 with a 4-barrel carburetor, but during the restoration it was upgraded to a correct Six Pack induction system. The HP-coded big block was rebuilt to stock specs and detailed for show, from the unique Six Pack air cleaner assembly to the Hemi orange on the block itself. It is nicely tuned so it starts easily and idles well after it comes off the choke, and thereâ€™s plenty of power on tap at any speed. A new radiator, fresh wiring harness, correct exhaust manifolds, and even the unique â€˜beep-beepâ€™ horns for which Chrysler paid Warner Bros. a royalty make it look and feel authentic. It makes plenty of oil pressure, doesnâ€™t smoke or burn oil, stays cool, and pulls itself around effortlessly on the road. This is a seriously fast car, even today, and it only works better the faster you go.
It is just as beautifully detailed underneath, thanks to the rotisserie restoration. Bright white floors make for a great background for the hardware and itâ€™s as neatly finished as the bodywork above. The TorqueFlite 3-speed automatic transmission offers crisp shifts without any harshness, and 3.55 gears on a Sure Grip limited slip were standard equipment. As I mentioned, power front disc brakes were part of the package and a fat front sway bar makes it feel a little less giant on the road. A reproduction exhaust system has just the right sound and the chrome oval tips look great under the bumper in back. Both 14- and 15-inch wheels were available, and this car wears 15-inch Rallyes with reproduction F60-15 Goodyear Polyglas bias-ply tires for an authentic 1970 feel.
This car also includes a nice documentation package that include the original Chrysler Corporation Broadcast Sheet, manuals, receipts, and some period promotional literature.
Our favorite cars are those that arenâ€™t merely beautiful or fast, but that also include a cool story and the Superbird is one of the best stories in the entire automotive kingdom. This car includes a spectacular restoration, desirable upgrades and features, and itâ€™s not orange. Nothing else makes a statement like that towering wing and the day has finally come when the Superbird commands respect everywhere it goes. If youâ€™re looking for one and demand excellence, this Arctic White â€˜Bird deserves a look. Call today!
Harwood Motors always recommends and welcomes personal or professional inspections of any car in our inventory prior to purchase. 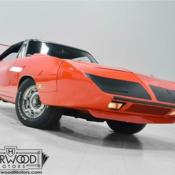 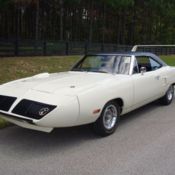 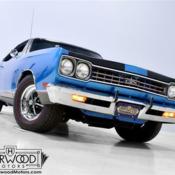 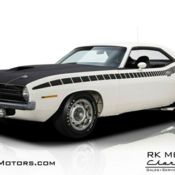 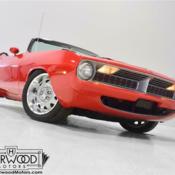 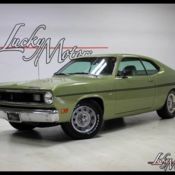 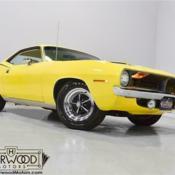 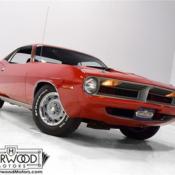 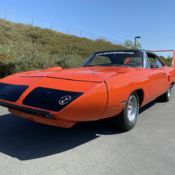 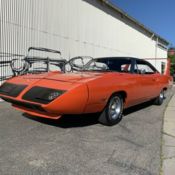