1969 Plymouth Satellite "Roadrunner A12" clone
VIN Decoded - RH23F9EXXXXXX
Make - R = Plymouth Satellite
Price Class - H = High
Body Type - 23 = 2 Door Hardtop
Drive Train - F = 318 230HP 1-2BBL 8 Cyl
Model Year - 9 = 1969
Assembly Plant - E = Los Angeles, CA
Fender Tag-
M21 - Roof drip rail moldings
M31 - Belt moldings
M33 - Body side moldings
R11 - AM radio 2 watts
V1X - Black vinyl top
V7X - Black accent stripes
A01 - Light package
A04 - Basic radio group
A14 - Spring special with vinyl top
G33 - Outside left hand remote mirro
J25 - 3 speed wipers
L31 - Fender mounted turn signals
Y4 - Spanish Gold Metallic
Y4 - Spanish Gold Metallic
H2X - High trim level, Vinyl bench, black
X9 - Interior paint black
E44 -318 2 barrel V8 230hp
D31 - A904 3-speed auto trans
One of the past owners added a 1969 383 with a factory 4-barrel intake and Carter Competition carb. A 727 trans was added also. The rear is an 8 3/4 with 3.23 gears. They also added a more modern center console and tall back seats. The seats are covered in a dark gray/black tweed.
The previous owner added the steel wheels, new bumpers, new vinyl top, Year One hood, a new exhaust, the Roadrunner horn, Roadrunner air cleaner cover, Roadrunner emblems, and painted it in R4 bright red.
I bought it in the spring of 2017. I rebuilt the front suspension, new inner and outer tie rods, upper and lower ball joints, QA1 upper control arms for more caster/camber adjustment, shocks. While I had the front end apart I added a disc brake kit in the front. I've replaced the plugs, plug wires, cap, rotor, ECU. Shortly after doing all of this the heater core went. Instead of using the large old stock unit I decided to add a Vintage Air heater/defroster. I replaced the aftermarket gauges with new aftermarket gauges also. I took off the stock Carter Competition carb and replaced it with a Edelbrock 1406. Replaced the voltage regulator, alternator, and belts. I also cleaned up the wiring under the dash and hood. I added Rockford Fosgate speakers in the kick panel. I replaced the seat belts with a stock reproduction set. The company uses stock seatbelt hardware and adds new belt material. I decided to add rear shoulder belts which was a rare option (C14) in 1969-1971.
Since owning this car we've taken it on several road trips. The most recent trip was a 3 hour drive to the Charlotte Autofair. At 70mph it stays around 2900 rpms. You can let go of the steering wheel and it will drive straight. When you apply the brakes it stops in a straight line, it doesn't pull right or left.
It's not a perfect Roadrunner A12 clone. To be perfect it would need a 440 with a 6-pack.
The mileage is just over 60k. I believe this to be original miles due to receipts I have dating back to the late 90's. One receipt from 1997 had the mileage at 47k. I have a bunch of receipts with the mileage going up over the years. I can't find any evidence of this car ever having rust. It's one if he straightest classic cars I've ever owned.

I've brought this to three car shows and it's won an award each time.

I have this for sale locally and reserve the right to end the auction early if it sells.

Buyer is responsible for shipping. $1000 deposit due with in 48 hours of end of auction. 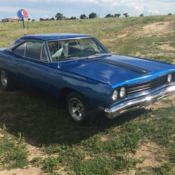 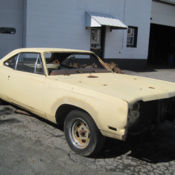 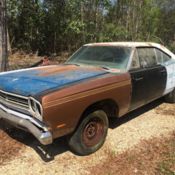 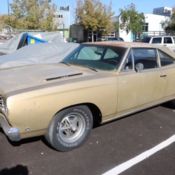 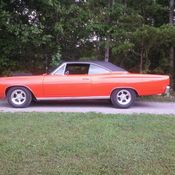 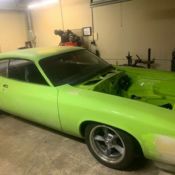 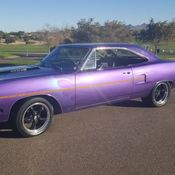 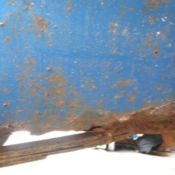 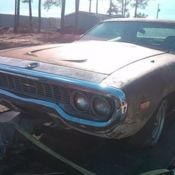 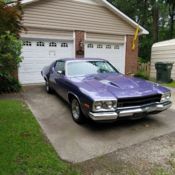