1972 Plymouth Barracuda body that would make a good project car or parts car for someone with a very rusty car. This car is not complete and what you see is what you get, no other parts are included. I do have a good title for this car. It does still have the VIN and fender tags. The VIN also matches the stamp in the cowl. Anyone with more questions or wants to see the car in person can call me at 620-786-4428.

Body - Structurally this car looks really good. It does have some typical rust damage in the lower qtrs. and rockers. There is some rust out in the truck pan. The floors have a little rust, but it is minimal. The roof looks nice. There is a little rust in the front structure where the fenders mount, but it isn't too bad. The cowl looks good. The L door is good, the R door has obviously been replaced and it would need repaired, it looks solid, but bent up. The R qtr is the worst part of the body. It was hit from straight in the back and wrinkled the qtr. The sail panel looks straight and the panel behind the back window looks straight, so I believe most of the damage is confined to the qtr itself. The tail panel is bent some and it will need replaced as well. Structurally underneath the car looks good.

Interior - The interior is gutted. The dash structure is still there, but not much else.

Drivetrain - This was originally a 318 car, the motor is gone. The trans and rear end are still there, but this car has been sitting for years and I don't know anything about the condition of them.

Call with other questions, 620-786-4428. A $1000.00 non-refundable deposit is due within 7 days of the end of the auction, the balance is due before the car is picked up or in cash when it is picked up. Buyer has 60 days of free outside storage at the buyers risk. After 60 days a storage fee will apply unless previous arrangements have been made. I do have a loader to assist in loading the body. I do have names of shippers I can provide to interested buyers. All transportation costs and arrangements are the responsibility of the buyer. This car is advertised locally, so I reserve the right to end the auction if it sells here. 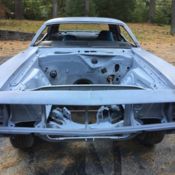 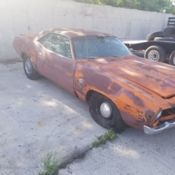 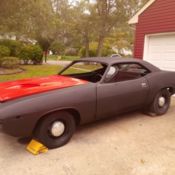 1972 Plymouth Cuda (Barracuda) Easy Project and a TON of Parts! 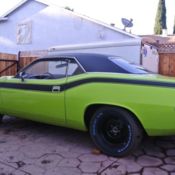 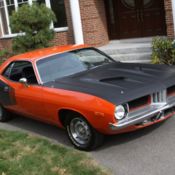 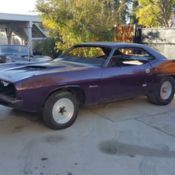 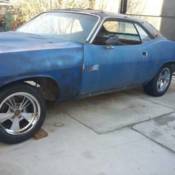 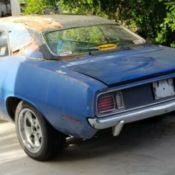 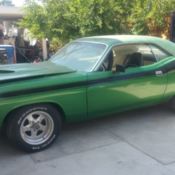 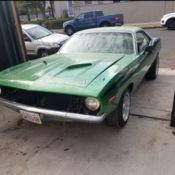