Relisting - one auction only - no reserve - this is your chance to bid and win!
Rare Arizona desert find * 1 of ? * Arizona titled 1942 Henney Packard 4x4 Ambulance. In need of a complete restoration, have had the car for over a year and have determined that my shop is not the proper place for this project, t should belong to a military vehicle collector, ackard collector, r someone who is a combination of both. It is a rolling project, had the wheels cleaned, oated, ew flaps, ubes and useable tires so it is movable. I have obtained a Packard straight 8 engine and transmission, urrently on a custom rolling stand, hich is also included with the car, lease assume both need to be gone through and inspected or rebuilt. Signed, otarized Arizona title, ll of the Henney badging on the vehicle is present and intact. Everything is located at my shop in Buckeye, Z 85326, elivery or assistance with transport may be available.
There are two ID tags located on the vehicle, Henney Coach Works builders tag, nd a Packard Body tag from which I have obtained the following information from research. My research documents will go to the new owner of the car.
- This is a Packard 8 of which Henney Coach Works produced 804 in 1942
- The body number is 13170, he range of body numbers in 1942 is 12900-13694 - so the body is the 270th of 804
- The model number on the Henney tag is 4294 which designates Packard 8 Ambulance
- The engine number on the Henney tag is E311184D - and E prefix (300,000 series) designates 1942
- The Packard serial number is A2278, A2) prefix signifies commerical chassis, nd 278 signifies 278 of 804
- The axles appear to be similar to those used in Marmon Herrington 4x4 conversions - I do not know where the 4x4 parts come into the history of this car
- From my research I learned that the top generals and dignitaries during the war (Eisenhower, atton etc) often traveled in Henney Packard vehicles as they were the top of the line of staff vehicles during the war effort, nd that some Henney Packards were used state side and abroad, uring and after the war as Civil Defense Vehicles, nd also at the VA.
- The original body color as found in the door jams is drab green, hen it appears the vehicle was painted again in a light gray color.
- I have found evidence in the vehicle that it may have been a running driving vehicle as late as the early 1990s, ut otherwise it appears it has been in its current condition since.
- Vehicle dimension are 20 feet long, .5 feet wide, nd 7.5 feet tall - it is a big vehicle. 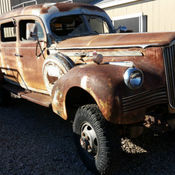 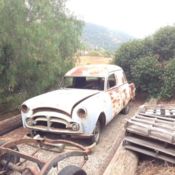 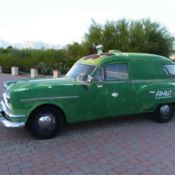 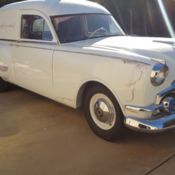 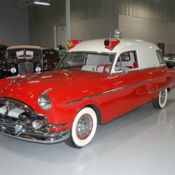 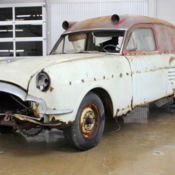 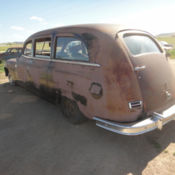 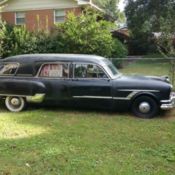 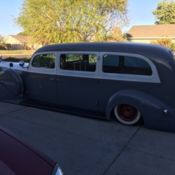 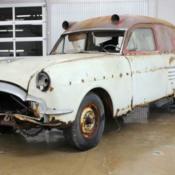