1962 Corvette Convertible.Roman Red w/Black interior, 327/250hp, 4-speed manual transmission.Very sharp 250hp '62!"The swan song of the solid axles." When the '62 Corvette was introduced, most of the automotive press and buying public alike were anticipating what was in store for the all-new '63 Sting Ray coming later that year. So much so, that the '62 kind of got lost in the hoopla. But even with the anticipation of the '63 at a fever pitch, the '62 got some well-deserved...accolades, as well! In its last year of production, there were some significant changes made to the solid axle! Most notably, the introduction of the 327ci small block engine. This power plant put out 250hp in is base form and went all the way up to 360hp for the fuel injected version! On the visual side, the two-tone paint scheme was discontinued and the stainless trim around the side coves was deleted in favor of a smother look. The "cove" was still there, just not as pronounced. And in place of the trim was a ribbed rocked panel molding below the doors. The side vents were also changed to single units and the optional whitewall tires went from wide to narrow. This was also the last year for a trunk until the C5 Convertible was introduced in '98.More and more, we get requests from our clients wanting a "driver-quality" vintage Corvette. But, this task can be easier said than done, because a large percentage of these cars have been beautifully (and expensively) restored. And thus prohibitively expensive to purchase. Not only that, having a perfect Corvette specimen often means not being able to drive the car just anywhere. Of course, every Corvette owner has his or her own way of enjoying their cars. Whether it's trailering it to a Concours car show or competing in an autocross event. It's whatever makes you happy! However, many times owners will have to anticipate and plan out just where they're headed on a weekend ride, so as to avoid heavy traffic and crowded parking lots that could cause a potential scratch in that every expensive paint job!Because of this, many would prefer a car this is beautiful, but perhaps not perfect. A Corvette that you can jump into at a moment's notice and just go cruising without worry of a sudden cloud burst or a traffic jam on PCH to possibly ruin your day! If that's where you're at than this '62 might just be the ticket!This very sharp solid axle came to us from TX. It's a got great looking Roman Red exterior complemented by a Black interior. And both are in excellent condition. It's in basically stock condition, but front disc brakes have been added for much-improved stopping power along with radial tires which make it a blast to drive on the freeway at cruising speed! To give it that "retro" look, American Torque Thrust wheels have been installed. The #'s matching 327/250hp small block engine makes great power and the 4-spd manual transmission shifts crisply. If you're in the market for a Corvette that you can take anywhere and have a fantastic time doing so, then this is your '62! 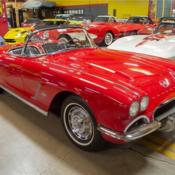 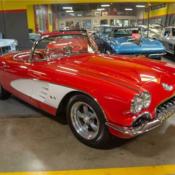 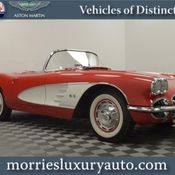 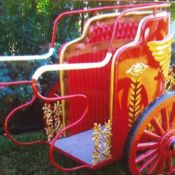 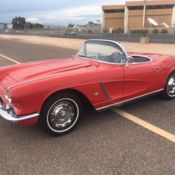 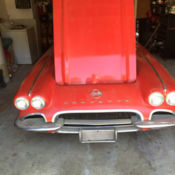 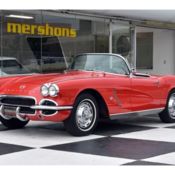 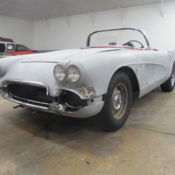 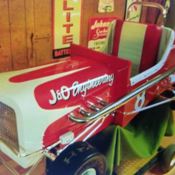 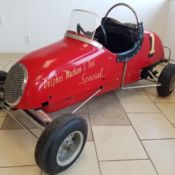