28,382 Actual Mile Toronado 455 V8 Automatic Pwr Steering Pwr Brakes A/C /// Enjoyed by two enthusiasts for 48 of its 50 years, this incredible, 28,382-mile Toronado began life in the warm embrace of Palms Springs, Florida. Driven sparingly, and maintained meticulously, the car was eventually traded to a Cadillac dealer in late 1996. Fast-forward two years, and the second of those long-term owners picked up a dream cruiser that was the exact same color combo his dad had owned....At that point, the car was still an untouched survivor, but years of fun in the sun had begun to take its toll. So, circa 2012, the owner decided to contract Reflections Paint and Body Shop of Mint Hill, North Carolina for a full respray of Oldsmobile's lively Meadow Green Metallic pigment. Perhaps that repaint was fair trade for the car keeping much of its highly-original interior. Just look at all that awesome Green vinyl! Most Toronado buyers took optimal advantage of the model's unique flat floor design by ordering big bench seats like these. A wood-trimmed dash centers a cool slot machine-style speedometer above factory air conditioning and a factory AM/FM radio. And the driver spins a Rim Blow Steering Wheel around GM's trick telescopic column. Since this Toronado is a highly desirable 1969 model, it sports "the biggest block alive" Ã¢â‚¬" a 455 cubic inch Rocket V8. That engine is paired to a Turbo-Hydramatic 425 3-speed, which shares most of its internal components with GM's stalwart Turbo-Hydramatic 400. That gearbox drives GM's first subframe chassis, which benefits from factory power steering and power-assisted disc and drum brakes. And everything rolls on stainless-capped steelies, which spin 15-inch Cooper Trendsetter whitewalls. If you're looking for an honest, unrelentingly cool cruiser that'll turn heads wherever you point it, it's hard to beat this solid Olds! Call, click or visit for more information! 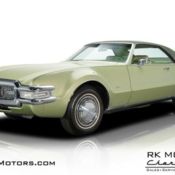 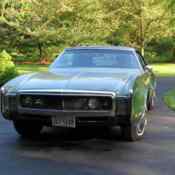 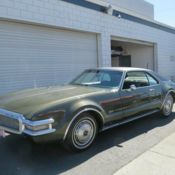 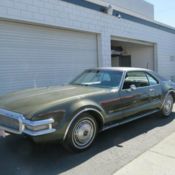 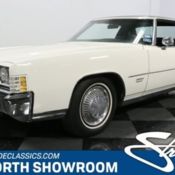 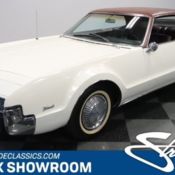 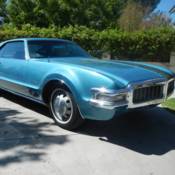 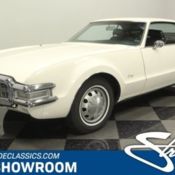 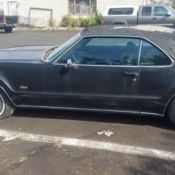 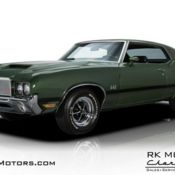