After a two-year hiatus the Starfire name returned for 1961 as separate model offered in a single convertiblebody style. Intended to compete in the growingfull-sizedpersonal luxury carmarket (vs. the Grand Prix and Riviera). The Starfire Hardtop Coupe joined the convertible for the 1962 model year.The 1965 convertible was the last Starfire Convertible.

While the nameplate returned in the '80's as a sub-compact, the Starfire legend was a distant memory and was applied willy-nilly to cars with none of the excitement of the original Starfire. The same fate befell GM cars such as Pontiac's GTO and Grand Prix and Buick's Skylark and Riviera. Thus the 1965 Starfire is a truly magnificent end to a Golden GM era and is becoming increasingly collectible.

For the 1965 model year, the Starfire received elegant new styling that replaced the gaudy trim adorning the early Starfires with a bold lower trim line that terminated in the coolest feature of all... dual exhausts that exited through the sides!

A new version of the Rocket V8 engine was offered for the 1965 model year, this one measuring 425cuin (7.0l) displacement, using aRochester4-barrel carburetor, and generating 375hp (280kW) at 4800 rpm. This was the most powerful engine in the Oldsmobile lineup and used only in the Starfire and the Jetstar. Also new for 1965 was the three-speedTurbo Hydra-Maticautomatic transmissionwhich replaced the previous fluid-coupling Hydra-Matic used by Oldsmobile since 1940.

This 425 cu in powerplant turned the 1965 Starfire into a true full-sized muscle car, rivalingthe 396/325hp Chevy Impala and 390/300hp Ford Galaxie with the Starfire having even more horsepower: 375 horses. As an interesting point of fact, the actual definition of "muscle car" is a full-size car with a large displacement, high horsepower engine. (Cars like the GTO and 442 were intermediates, and Camaros and Mustangs were ponycars.) Thus, this Starfire is a true muscle car, albeit one with all the luxury and power options that GM was famous for.

1965 sales were only 2,236 for the convertible, making the 1965 Oldsmobile Starfirethe rarest production car in General Motors history... adding significantly to its collectability. The most recent Hagerty Price Guide shows a Concours example at $48,300, and excellent one at $32,500 and a good one at $22,700.

This particular Starfire is one of the finest on offer -- a one-family-owned pride and joy that was always garaged and properly serviced and used very sparingly (only 52k miles!) Most of the car is original, although it did receive one repaint in its original Provincial White, which looks amazing with the contrasting original Medium Blue soft top and bucket seats (with console) interior. This car is truly loaded with power steering, power brakes, power seats, power antenna, AM/FM radio, remote trunk release, console with tach, cruise control (very rare), white wall tires with wire wheel hubcaps. Also included are a complete set of the very rare factory optional mag-style hub caps that give the car an even more "muscle" look.

The car recently received a full mechanical freshening including all fluids, new brake booster, new mufflers, and runs and drives like 1965. 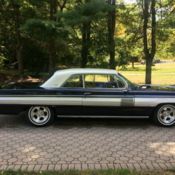 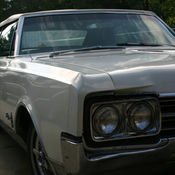 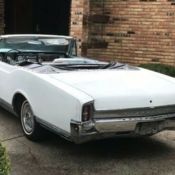 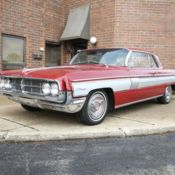 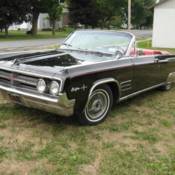 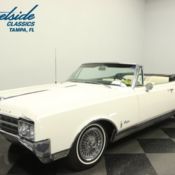 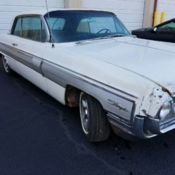 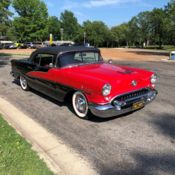 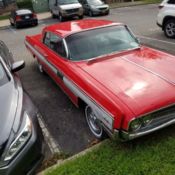 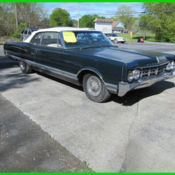